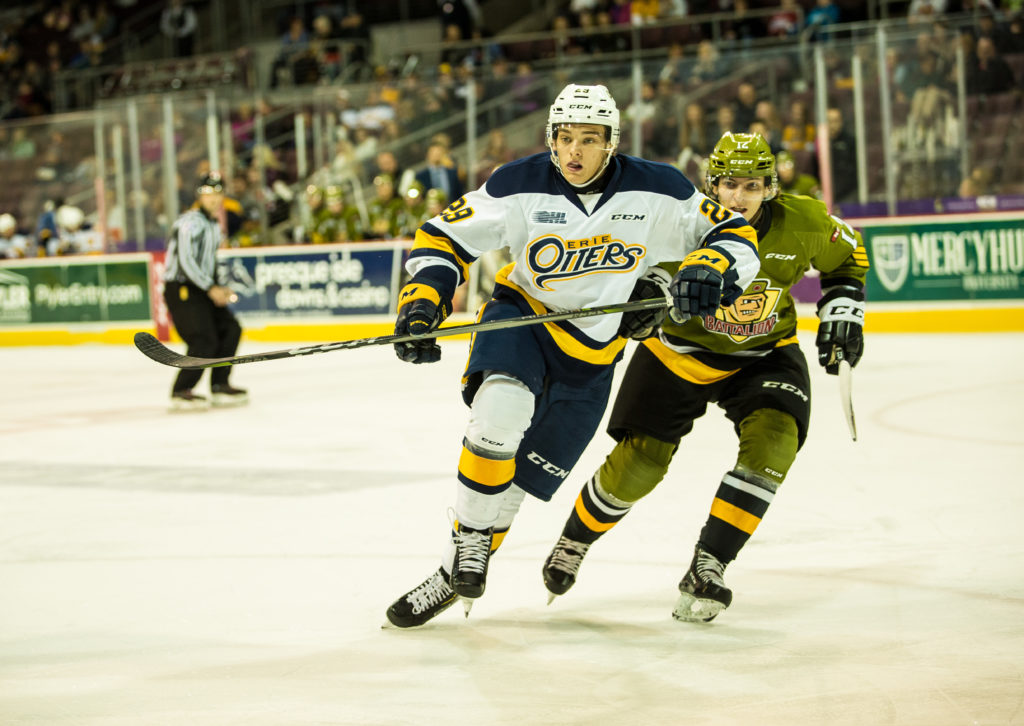 ERIE, PA – The Erie Otters returned home on Saturday night after a road win against the Guelph Storm and hoped to extend their winning streak to five games against the visiting North Bay Battalion. An early first period goal from Matthew Struthers put the Otters behind by one, and the teams traded powerplay chances to round out the opening period.

The second period began with Otters finishing up a powerplay from the first, and the home team was immediately tasked with killing a Kyle Maksimovich penalty upon its completion. On the powerplay, Justin Brazeau scored his league-leading 15th goal of the season, and the Battalion took a two goal lead early in the frame. The Otters found success for themselves on the powerplay when Chad Yetman’s scoring touch came out and pulled the home team within one. Gera Poddubnyi followed this up with a goal of his own, knotting the teams at two. This wouldn’t last long, as the Battalion pulled ahead once again in the final minute of the period when Matthew Struthers found the back of the net, and the teams headed to the locker room separated by a goal.

The final period began much like the two before it, with North Bay finding the back of the net early, this time coming off of the stick of Brandon Coe. The Battalion would add another coating to their lead when Matthew Struthers found the back of the net and completed his hat trick on the evening.  This would prove to be the final dagger for the home team, as the Erie winning streak would come to a halt at four games, losing 5-2.

The Otters will look to end the weekend on a positive note tomorrow when they take on the Mississauga Steelheads at 4PM.