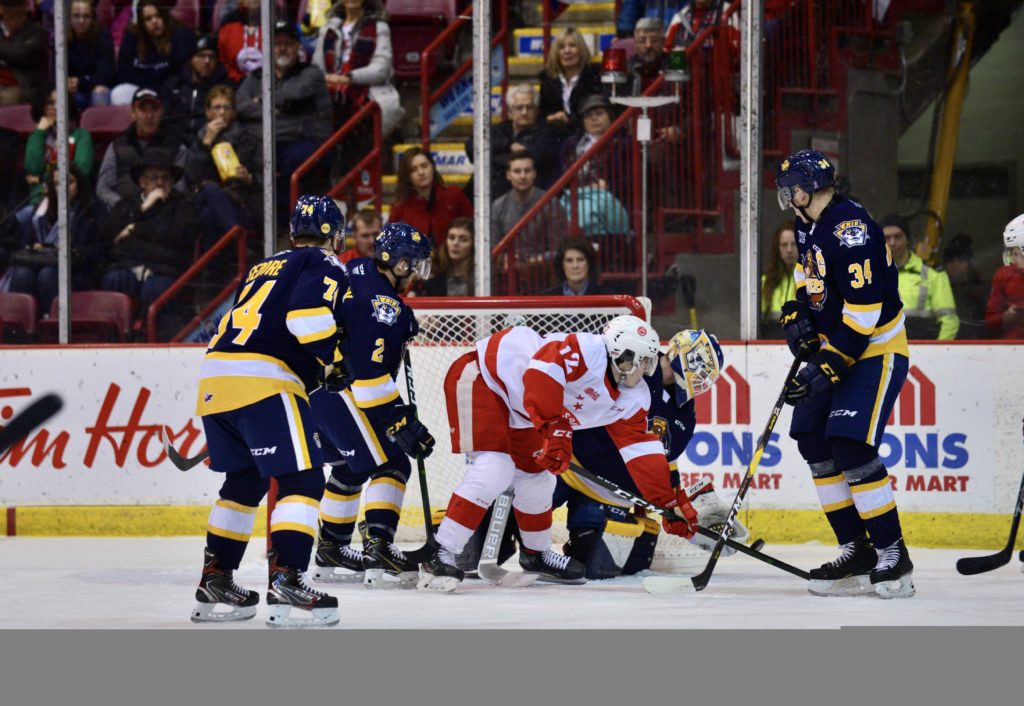 Sault Ste. Marie, Ontario – The Erie Otters won consecutive road games for the first time all season with a 5-2 victory over the Sault Ste. Marie Greyhounds Sunday afternoon to jump back into a playoff spot as they head into the holiday break.

Erie’s penalty kill was put to work early and killed off a Brendan Kischnick interference penalty, which occurred just two minutes and nine seconds into the first period. The penalty-killers were back out for an important kill late in the frame, when a double-minor penalty was assessed to Kischnick at the 16:11 mark. The penalty kill successfully killed the double-minor, which had a carryover time of 11 seconds into the second period. The Otters recorded 10 shots through the first period and Erie netminder Daniel Murphy stopped all seven shots he faced to keep the contest scoreless after 20 minutes of play.

Zack Trott gave the Greyhounds a 1-0 lead just one minute and 31 seconds into the middle period. Minutes later, Noah Sedore and Danial Singer got the puck to Drew Hunter, who scored from the point to tie the game 1-1. Erie took the lead at the 12:53 mark of the second stanza when Singer scored from Emmett Sproule. Maxim Golod set up Elias Cohen for what would eventually stand as the game-winning goal with just 2.8 seconds remaining in the period to give Erie a 3-1 lead at the break.

Erie’s momentum carried through the intermission and Kurtis Henry fed the puck to Golod, who scored a wrap-around goal only 19 seconds into the final frame. Soo began to push back, scoring at the 13:52 mark to make the score 4-2. A pivotal moment arose at the 16:43 mark of the period, when Murphy stopped Trott on a penalty shot, keeping the score 4-2. Greyhounds defenseman Billy Constantinou was called for a double-minor, high-sticking penalty with four minutes and 10 seconds remaining in the game, and Connor Lockhart scored an empty-net, powerplay goal with 49 seconds on the clock. Kischnick and Hayden Fowler assisted on Lockhart’s goal, which further secured the Erie victory to 5-2.

The Erie penalty kill was a perfect five-for-five, and 10 skaters recorded at least one point during Sunday’s contest.

The Otters will head into the holiday break with a record of 13-11-2-6 with 12 days between games when they will host the Niagara IceDogs Saturday, December 28, at the Erie Insurance Arena for Star Wars night to benefit the United Way of Erie’s Imagination Library, featuring Star Wars themed jerseys, costumed characters in attendance and much more.