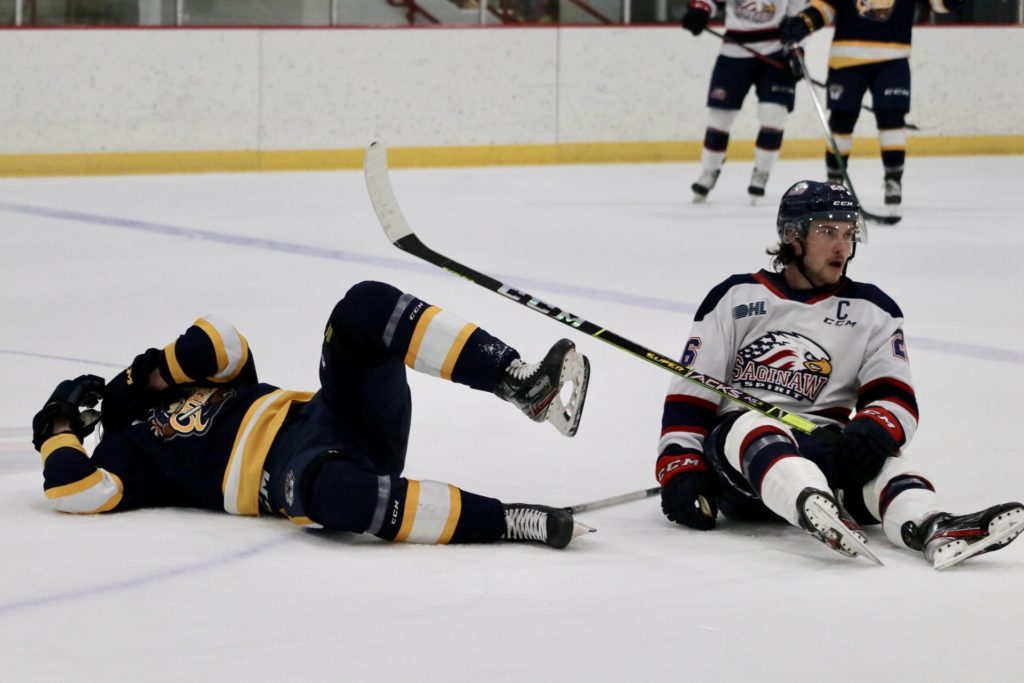 Flint, Michigan – For the first time in the 2021 preseason, the Erie Otters packed the bus and hit the road for exhibition action – arriving in the Vehicle City to do battle with the Saginaw Spirit. After going a perfect 3-0 on home ice for the preseason, the Otters looked to continue their success against Michigan’s teams. Outscoring the Spirit 12-8 in the previous two battles in Erie, the Otters were hoping to remain perfect. Nolan LaLonde would get the start in net for the Otters, opposite Andrew Oke for the Spirit.

Halfway through the first period, with a penalty kill already under their belt, the Otters would head back to the box from a Kaleb Smith delay of game. :41 into the Power Play, the Spirit would strike for the first goal of the game from Dalton Duhart’s second goal of the preseason. Mitchell Smith and Matyas Sapovaliv would get the assists on the 1-0 goal. The Spirit would close out the period on a pair of penalty kills, and successfully kill them off. Despite the Spirit lead, the Otters would outshoot the leading team 12-9.

Scoring would not be the theme of the second period, as both teams would be held scoreless from the netminders work. The story of the middle frame, rather, would be the penalties taken by either side. Ian Phillips of Saginaw would take a pair of high-sticking penalties at the 9:20 and 11:20 marks of the period – both killed off. The second of the two penalties being killed early thanks to a Brendan Hoffmann slash at the 12:46 mark. The Spirit would once again commit – and kill – a pair of penalties, for high-sticking and delay of game. A Ryan Thompson trip for the Otters would give Saginaw a power play to close the period, that would go unconverted. The offense would continue through the special teams units, as Erie would outshoot Saginaw 14-11 in the second, but remain behind 1-0.

Newly-signed goaltender Marshall Nicholls would get the third period start for the Erie Otters, and initially, it looked like the boost that the team would need to get back into it. 7:40 into the frame, not-so-newbie Carey Terrance would score his second goal of the preseason with assists from Owain Johnston and Elias Cohen. With plenty of time left in the period, it looked like Terrance and the Otters were in business to get rolling. However, the game would stand tied for only 66 seconds, as Luke McNamara would find his third goal of the preseason at the 8:46 mark, and make it a 2-1 Saginaw lead. Erie would continue its shooting notoriety, but shoot itself in the foot with three penalties committed in the final nine minutes – including one in the last minute. With seven seconds left, Josh Bloom would earn his first of the preseason on a Power Play empty-netter. Saginaw would overcome a third period tally to take their only win over Erie in the preseason, 3-1.

Erie would outshoot the prevailing Spirit, 37-29, in the losing effort – their first lose of the exhibition schedule. The Otters close out the preseason on Saturday in Flint against the Firebirds at 2 P.M. at the Flint Iceland Arena. The Otters return to Flint on Saturday, October 9 to open the regular season.