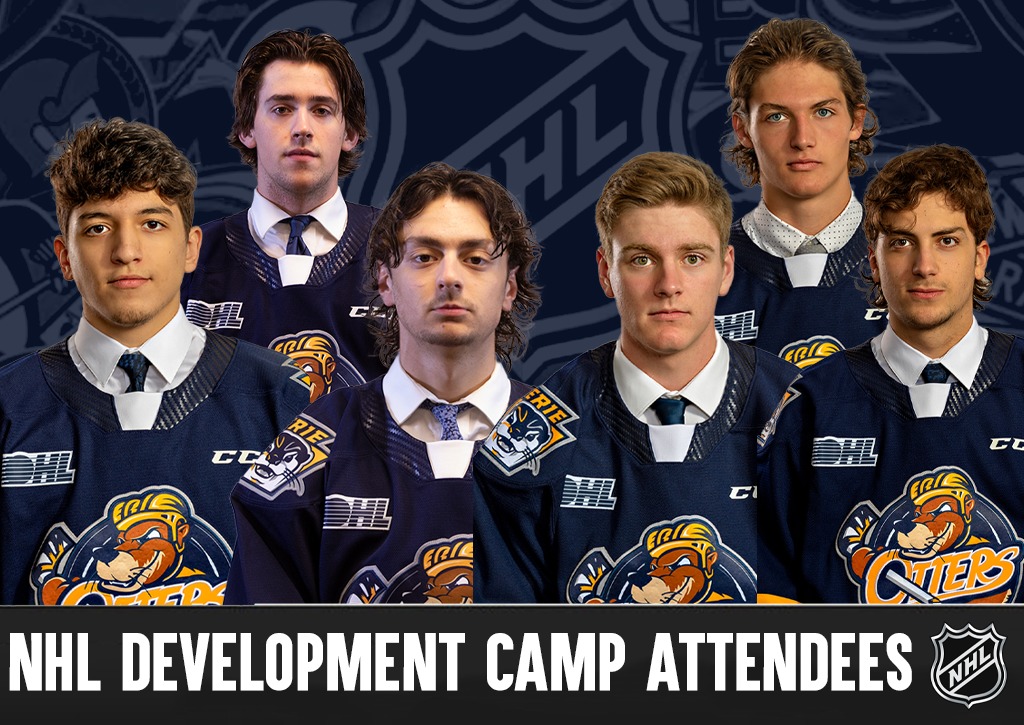 Erie, Pennsylvania – With the newest wave of National Hockey League prospects finding a home through this past weekend’s 2022 NHL Entry Draft, the new season officially kicks off for the league’s 32 teams. For the first time since 2018, the formal start of the new year begins with the NHL’s Development Camps – in which multiple Erie Otters find themselves once again participating. Development Camps began as soon as Sunday, with some beginning later in the week.

“We are thrilled to share in such an exciting moment with the guys. Participating in an NHL Development Camp is an honor they have earned and worked so diligently to attain.” said Brown, “We are happy for the players and their families.”

With different camps taking place from Sunday, July 10 through Saturday, July 16, the Otters will be represented all week long.

The 2021-22 season’s story of tenacity, Christian Kyrou went from an unranked prospect in the preseason, to #179 in North America, to eventually being a top 50 prospect in the NHL Draft – where he would hear his name called 50th overall on Friday morning by the Dallas Stars. Kyrou’s selection would represent the 43rd Otter all-time to be selected in the Draft, and the 16th player to be taken in the top 50.

This wasn’t without cause – Kyrou ranked fourth among OHL defensemen with 60 points (18G+42A) with the Otters in the 2021-22 season, third among league defense in game-winning goals (4), and was voted the Western Conference’s Most Underrated Player in the 2021-22 OHL Coaches Poll. Not bad for a player coming into his Sophomore season with zero points in eight previous career games. Kyrou will also represent the Stars and Otters at Hockey Canada camps to determine the roster for the 2022 World Junior Championship.

Christian Kyrou’s rise from ‘obscurity’ to a top 50 prospect is one that showcases what development and opportunity can do for a young player – and is why he’ll get a chance to learn and grow in the Stars system during this weekend’s Development Camp. A player continuing to come into his own right as a two-way offensive defenseman, Kyrou will look to showcase what made him such a game-changing threat in the 2021-22 season, and bring excitement for the future for both Stars and Otters fans.

Camp for the Dallas Stars begins the afternoon of Monday, July 11 with a Practice, and runs through Friday, July 15.

Connor Lockhart’s time as the only current Otter taken in the NHL Draft came to a close on Friday afternoon, but the sentiment and mark as the 42nd drafted Otter remains his mark. Taken Round 6, #178 overall in the 2021 NHL Entry Draft by the Vancouver Canucks, Lockhart has already had the chance to participate in various developmental opportunities with his NHL club prior to his first Development Camp. During the 2021-22 preseason, Lockhart participated in the Canucks’ Rookie Camp and Training Camp, catching the eyes of scouts and fans alike for his dynamic play and craftiness. The 19-year-old Forward from Kanata, Ontario will be looking to continue to impress his pro coaches this offseason as he pursues a chance in the professional ranks in 2022-23.

While Lockhart didn’t experience the breakout season he expected of himself in 2021-22, the Forward did improve in nearly every offensive category between his rookie and sophomore seasons. In the latest season for Otters’ #73, he played 64 of 68 games with 48 points (23G+25A) – good for fourth on the team – including a team-best four game-winning goals.

There will be a notable fire in the belly of Connor Lockhart as he enters season three of his major junior career, and will continue to push the envelope of being the steal of the 2021 NHL Entry Draft.

Camp for the Vancouver Canucks begins the afternoon of Monday, July 11 with a Practice, and runs through Friday, July 15.

The most ‘tenured pro’ of the Erie Otters’ representatives in Development Camp, 2022 Otters graduate Daniel D’Amato spent a handful of games in the 2021-22 season in the Vegas Golden Knights’ system. During the preseason of 2021-22, D’Amato participated in the Golden Knights’ Rookie Camp and Training Camp, as well as their AHL affiliate Henderson’s Training Camp. After impressing coaches in the latter, D’Amato received a five-game Amateur Tryout (ATO) with Henderson in November 2021. During his five games with the Silver Knights, D’Amato scored a goal and two assists with a positive +/-.

In his final season in Erie, D’Amato was a top 40 scorer in the OHL and the top scorer on the Otters with a point-per-game average in his 63 games (24G+39A). Most notably, ‘Captain Dan’ became the first player in the history of the OHL’s U18 Priority Selection Draft to score 100 career points, surpassing the century mark from a Christian Kyrou goal.

D’Amato will look to continue to catch the eyes of development coaches with the Sin City’s team, eying an Entry Level Contract following his Overage season in the OHL.

“Having experienced a camp like this last year, I’m doing my best to be a leader and share some wisdom with younger guys who haven’t been through it before.” said D’Amato, “In saying that, showcasing what I’ve improved on to the organization on and off the ice is equally as important.”

Baptism by fire was the theme of the rookie season of goaltender Nolan Lalonde, who was put into the position of every-game-starter before the start of the season. From the unexpected opportunity, came an evolution of a goaltender to the top among rookies. The trials and tribulations for the netminder paid off in the end, as the 17-year-old Lalonde will take part in the Pittsburgh Penguins camp.

Lalonde, originally hailing from Kingston, Ontario was the 14th ranked North American goaltender in the NHL Central Scouting’s Final Rankings. The 49th overall pick in the 2020 OHL Priority Selection Draft, Lalonde appeared in 54 of Erie’s 68 games this season, with an .877 SV%, 3.62 GAA, and a 24-25-2-1 record. Lalonde’s 24 wins were top among all rookie goaltenders, t-7th in the OHL, and second all-time amongst Otters rookie netminders. Lalonde earned honors as the OHL’s All-Rookie First Team Goaltender, as well as being named Midwest Division Academic Player of the Month honors from the OHL in November.

Internationally, Lalonde was named a Goaltender for Canada’s National Men’s Under-18 Team at the 2022 IIHF U18 World Championship – playing alongside Otters’ teammate and fellow NHL Development Camp attendee Spencer Sova – starting one game and getting Team Canada’s lone-win in net.

Camp for the Pittsburgh Penguins began on Sunday, July 10 with On-Ice Sessions and a Practice, and runs through Thursday, July 14.

The 80th ranked North American skater in the NHL Central Scouting Final Rankings, Spencer Sova will represent one of the highest-ranked undrafted prospects in Development Camps this year, being part of the Buffalo Sabres’ camp later this week.

Sova was the #8 overall pick by the Erie Otters in the 2020 OHL Priority Selection Draft, and despite missing out on his true rookie year due to the pandemic, made a notable showing as a reliable blueliner in the 2021-22 season. The 17-year-old defenseman appeared in 64 of 68 games this season for the Otters, running the point on the power play. A native of Windsor, Ontario Sova was a top-10 scorer on the team and top-40 scorer amongst all OHL Defensemen with 28 points (9G+19A) including four PPGs.

Internationally, Sova was named an Alternate Captain for Canada’s National Men’s Under-18 Team at the 2022 IIHF U18 World Championship, and was a point-per-game player for Team Canada with three assists in three games.

Camp for the Buffalo Sabres begins the afternoon of Wednesday, July 13, and runs through Saturday, July 16.

The farthest-traveling undrafted prospect for the 2022 NHL Development Camps, Elias Cohen will have the opportunity to showcase to the Calgary Flames what brought him his career-best season.

The Forward from Toronto showcased the scoring threat and quickness that defenders will have to be on high alert for in his Overage season in 2022-23, nearly tripling his career scoring totals in the 2021-22 season. After playing in 63 career games coming into 2021-22, Cohen played in 65 of the 68 games for the Otters this season, and spent nearly the whole year at the top of the scoring totals amongst the team. In his 65 games, Cohen grabbed 61 points (24G+37A), including six power play goals, two shorthanded goals, and two game-winning goals. For his efforts, Cohen was the second-ranked scorer on the Erie Otters, and a top-50 scorer in the entire OHL.

A former late-round pick of the Otters in the 2018 OHL Priority Selection Draft – taken 120th overall – Cohen has been given the opportunity to develop and grow as a player, which was wholly realized this season.

“It’s always been a dream of mine to play in the NHL, and this week’s opportunity with the Flames has only made me more determined to achieve that dream full-time.” said Cohen, “It’s been a first class experience from a first class organization, and I hope to leave a good impression with everyone here.”

Camp for the Calgary Flames begins Tuesday, July 12, and runs through Thursday, July 14.

The Erie Otters organization sends best regards to all six players representing the team from coast-to-coast in the National Hockey League this week, and looks forward to seeing their continued growth and development with top level coaches and talent. 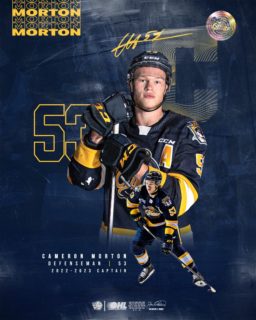 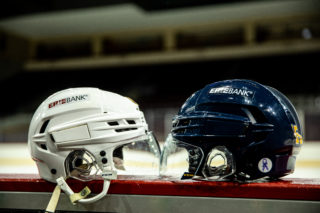 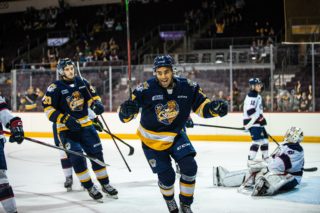 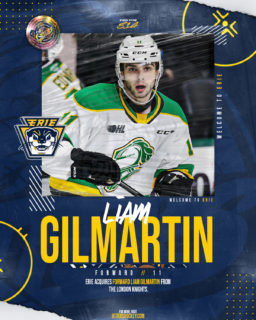