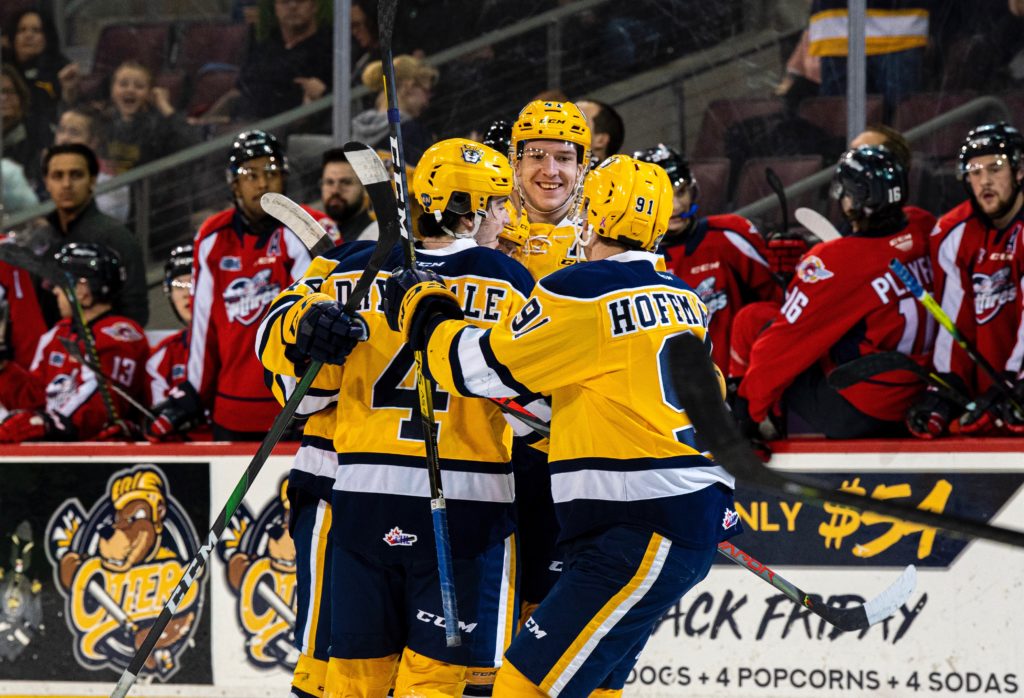 Erie, Pennsylvania – Austen Swankler recorded a career-high, three-point night Friday when the Erie Otters fell to the Windsor Spitfires 7-6 in overtime after a back-and-forth game which saw a seven-goal third period.

Brendan Sellan was set up by Jamie Drysdale and Emmett Sproule for his second goal of the season just five minutes and 51 seconds into the first period, giving the Otters an early lead. The Spitfires responded two power play goals in three minutes from Jean-Luc Foudy and Will Cuylle. After 20 minutes of play, the Otters trailed the Spitfires 2-1.

Daniel D’Amico added to the Windsor lead at the 13:20 mark of the middle stanza but Erie began to push back. Austen Swankler brought the Otters to within a goal, scoring an unassisted, breakaway goal with less than four minutes remaining in the period. Windsor took a 3-2 lead into the third period.

Chad Yetman scored an unassisted goal just 1 minute and 59 seconds into the third period to tie the game 3-3. Connor Corcoran answered minutes later to retake the lead for Windsor. Tyler Angle scored to give the Spitfires their second two-goal lead of the game at the 9:01 mark of the third frame. Erie’s Cameron Morton received a pass from Swankler and took a shot that was deflected into the net by Sproule, making the game 5-4. The Otters went to the power play and Yetman notched his second goal of the game. Drew Hunter and Maxim Golod picked up assists on Yetman’s game-tying goal. Less than two minutes later, Jack Duff broke the 5-5 tie off of a passing play from Swankler and Sproule and gave Erie its second lead of the game with 6 minutes and eight seconds remaining in the third period. Curtis Douglas scored with 22 seconds left in regulation, giving the game its fourth tie, and the seventh goal of the third frame.

Windsor grabbed the extra point off the stick of Corcoran 46 seconds into overtime for the victory.

Erie will look to rebound Saturday, November 16, on the front end of a home and home series against the Mississauga Steelheads as the Otters present Erie SeaWolves night. The Otters will wear baseball themed uniforms for the Detroit Tigers Double-A Affiliate which will be auctioned off following the game with proceeds benefitting the Chace Numata Scholarship. Erie also hosts a Goodwill Collection night Saturday, with donations being accepted throughout the game.