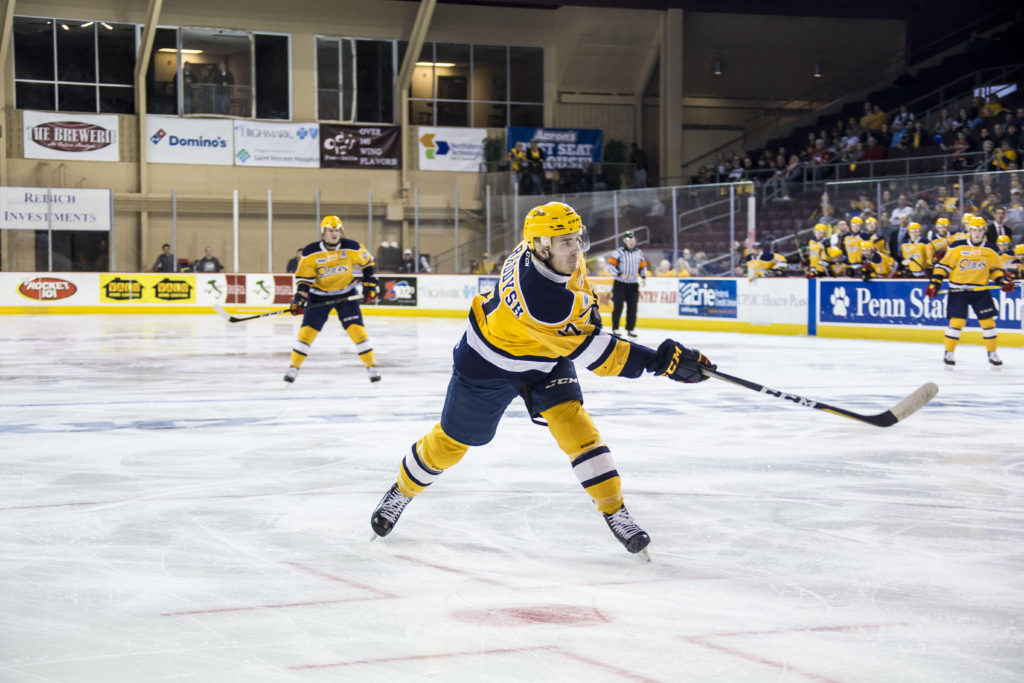 With their Game 7 overtime victory over the London Knights, the Otters progressed to the Western Conference Finals for the fourth season in a row. They face the Owen Sound Attack–who dispatched the favored Sault Ste. Marie Greyhounds in six games–for the first time in the playoffs in OHL history. Led by Lightning prospects Taylor Raddysh and Anthony Cirelli, the Otters defeated the Attack 6-1 in Game 1.

The Otters, who faced one of their biggest tests in the playoffs to date against the Knights–and came out on top–wasted no time getting on the scoreboard. Anthony Cirelli, who scored the tying goal in Game 7, stayed with the play created by Warren Foegele in the Attack’s defensive zone and chipped the puck past Owen Sound goalie Michael McNiven. After the goal, however, both teams turned to a conservative, physical style of play–nobody wanted to make mistakes, and the Otters skated off for the first intermission with the 1-0 lead.

Early in the second period, Taylor Raddysh entered the offensive zone with speed, skated around the Owen Sound defenders, and put the puck over McNiven’s glove to give the Otters a 2-0 lead. Like Cirelli, Taylor Raddysh was drafted by the Tampa Bay Lightning NHL club. Then, Raddysh beat McNiven again just minutes later off the feed from Kyle Maksimovich, giving the Otters a commanding 3-0 lead. Their offense surging, the Otters made it 4-0 before the halfway mark of the second period: Warren Foegele completed a tic-tac-toe play from Kyle Maksimovich and Cirelli, and–on the next shift–Alex DeBrincat snapped a shot through McNiven’s pads to make it 5-0. Owen Sound was unable to regain any momentum and skated off for the second intermission five goals in the hole.

Owen Sound opened the third period with a quick goal off the two-on-one rush, when Chase Campbell roofed the puck over Erie goaltender Joseph Murdaca’s shoulder. The Otters, not about to let their opponent back into the game, however, came right back to score their sixth goal of the night. Dylan Strome tapped the puck past Vella to give Erie their five goal lead again, which would stand as the Attack were defeated 6-1. The Otters took a 1-0 series lead in the Western Conference Finals.

For the Otters, Taylor Raddysh scored two goals and an assist; Alex DeBrincat scored once and added two assists; and Warren Foegele had a goal and notched an assist. Joseph Murdaca 27 saves on 28 shots in the victory.

Chase Campbell scored the Attack’s lone goal. Michael McNiven made 11 saves on 16 shots, then Emanuel Vella stopped 15 of the 16 shots he faced.

The Otters will face the Attack in Erie on Saturday, April 22, where they look to take a 2-0 series lead before heading to Owen Sound.