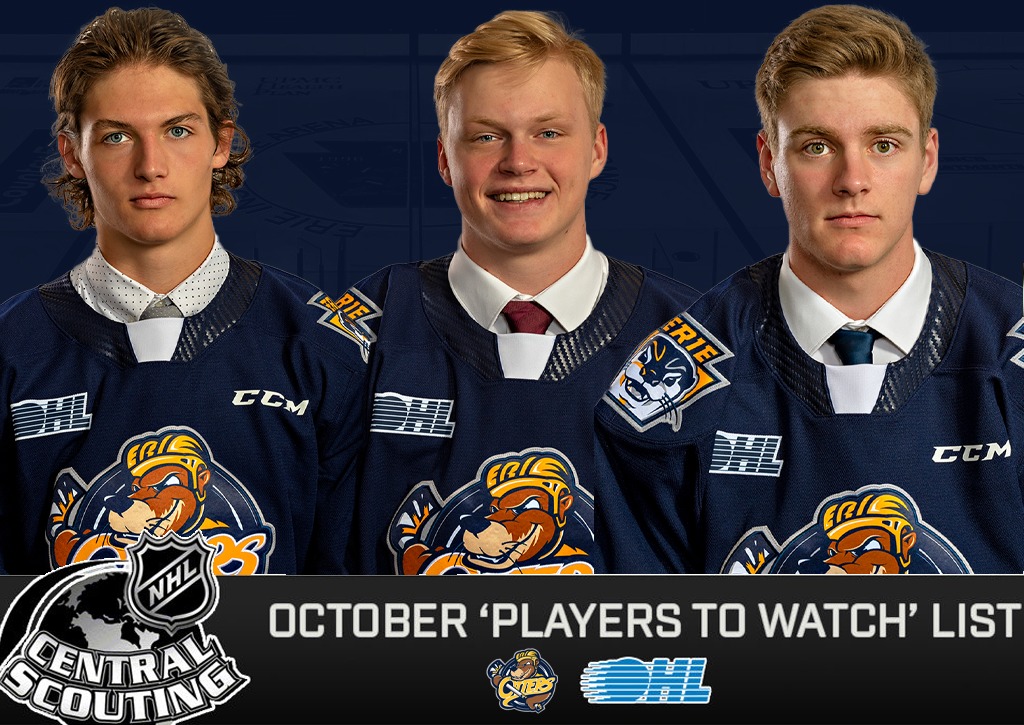 Erie, Pennsylvania – With four games in the books for the Erie Otters, the team readies for its first home games of the young 2021-22 season. Three Otters’ players have impressed National Hockey League scouts in the early season, being named to the league’s ‘Players to Watch’ List for October.

Spencer Sova, the #8 overall pick in the 2020 OHL Priority Selection Draft, was granted a ‘B’ Ranking on the watch list – indicating a second-round candidate for the 2022 NHL Draft. The 17-year-old Windsor, ON native has suited up in all four games for the Otters, most notably recognized for his role running the blue line on the power play. After a six point preseason, the rookie Defenseman has one point (1A) to start the year. Sova was one of 16 defenseman named to the Watch List.

Artyom Kulakov, the #82 overall pick in the 2020 Canadian Hockey League Import Draft, was granted a ‘C’ ranking on the watch list – indicating a fourth-round candidate for the 2022 NHL Draft. The Bolshoy Kamen, RUS native has appeared in all but the opening game of the 2021 season for Erie. At 6’02”, 206 lbs., Kulakov has been notable for his physical prowess and readiness to jump-in to stand up for his teammates in chippy games. The rookie Defenseman has an even +/- to start the year. Kulakov was one of 16 defenseman named to the Watch List.

Nolan Lalonde, the #49 overall pick in the 2020 OHL Priority Selection Draft, was granted a ‘C’ Ranking on the watch list. The native of Kingston, ON has started all but one game for the Otters in his first OHL season, owning a .914 SV% with a 2.68 GAA. Lalonde made 30-saves in his OHL debut, and in his most recent appearance made 29-saves enroute to his first career win. Lalonde was one of just five goaltenders named to the Watch List.

All three of the Otters’ ‘Players to Watch’ are projected to play in the team’s Home Opener on Saturday, October 23 at the Erie Insurance Arena. For a complete list of the OHL’s 66 Players to Watch, head to OntarioHockeyLeague.com.