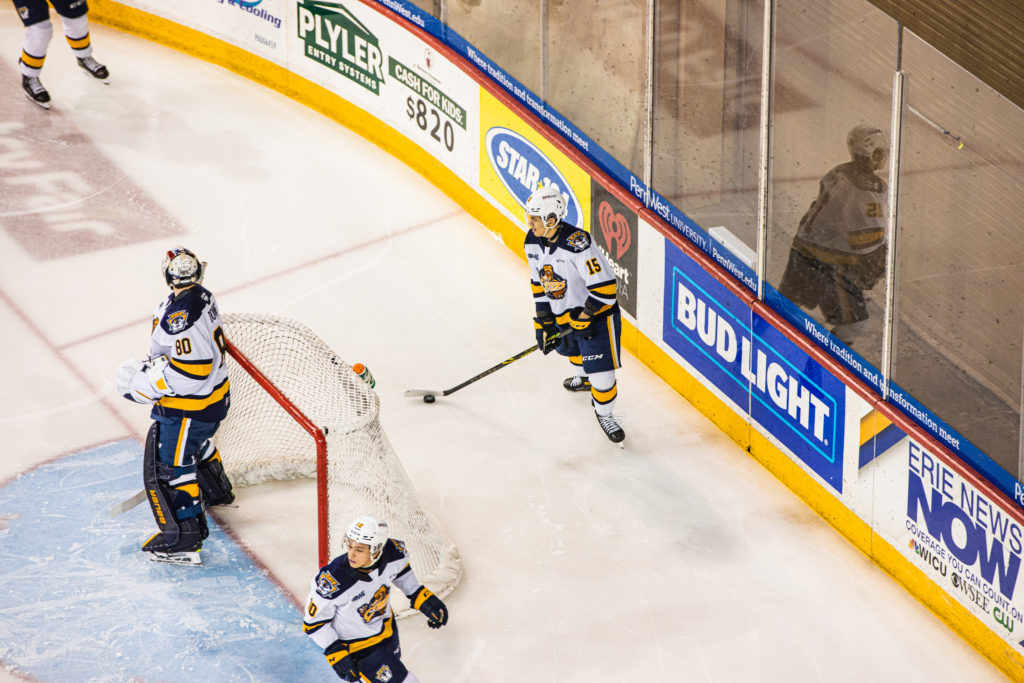 Erie, Pennsylvania – As the cold weather blows into the Ontario Hockey League in the month of December, Erie Otters stars are starting to heat up near the season’s halfway mark.

Erie started the “week” of play off with hosting their rival London Knights on Wednesday, November 30. A late goal would see Erie force the game to an eventual shootout, resulting in a 3-2 Knights victory. Erie would hit the road for their first game against the Guelph Storm on Friday. Erie would start with an early 2-0 lead, but fall to the Storm 4-2. Things would turn themselves around on Saturday as Erie would defeat the Mississauga Steelheads 7-3 on home ice. The final game of this week saw the Otters host the Saginaw Spirit on Tuesday in the final makeup game of the season. The red-hot Spirit were able to defeat the Otters 8-3.

These were the players that impacted the teams play this week.

Sova keeps playing better and better every week for the Otters, as the Windsor, ON, native has scored a point in five of the six games.

#22 would be a big contributor in Wednesday’s game against London, as he would score the game-tying goal to send the game to overtime – assisted by Christian Kyrou and Sam Alfano. Two early Sova goals would be a key factor in Erie’s win on Saturday against Mississauga. The goals would be assisted by Kyrou, Malcom Spence (2) and Brett Bressette. Sova would score one more goal on the week coming in the Saginaw game as he would draw the first goal of the match assisted by Kyrou and Bressette.

Sova is playing sensational hockey and always finding a way to score.

Lets continue the point streak! Kyrou has recorded at least a point in his last eight games, standing at 14 total (1G+13A) in the stretch.

#15 started the scoring on Wednesday against London, and would record an assist off a Spencer Sova goal. Kyrou would get involved in the two goals scored in Guelph helping Sam Alfano and Brett Bressette both score. Saturday would be the same recipe, as Kyrou would help Sova and Carrey Terrance score. Deja Vu all over again would see another two-assist night from Kyrou, helping Sova and Elias Cohen with goals on Tuesday.

The defenseman has really been giving out a helping stick in his last eight games.

Wasting no time in being welcomed back! Sam Alfano is coming off at least point in every game played this week.

Alfano would start on Wednesday recording an assist off a Spencer Sova goal. #33 would then score a goal on Friday in Guelph and Saturday against Mississauga, plus two assists in the latter’s game to give him a multipoint night. Sam Alfano would finish the week off with one more assist, coming off an Elias Cohen goal.

As the big-bodied forward continues to be an offensive threat for Erie, the Otters look ahead to a big weekend on home ice.

Erie welcomes in the Windsor Spitfires on Friday night for Children’s Grief Awareness Night (pres. by Highmark Caring Place), and Night of Champions against Kingston on Saturday night.