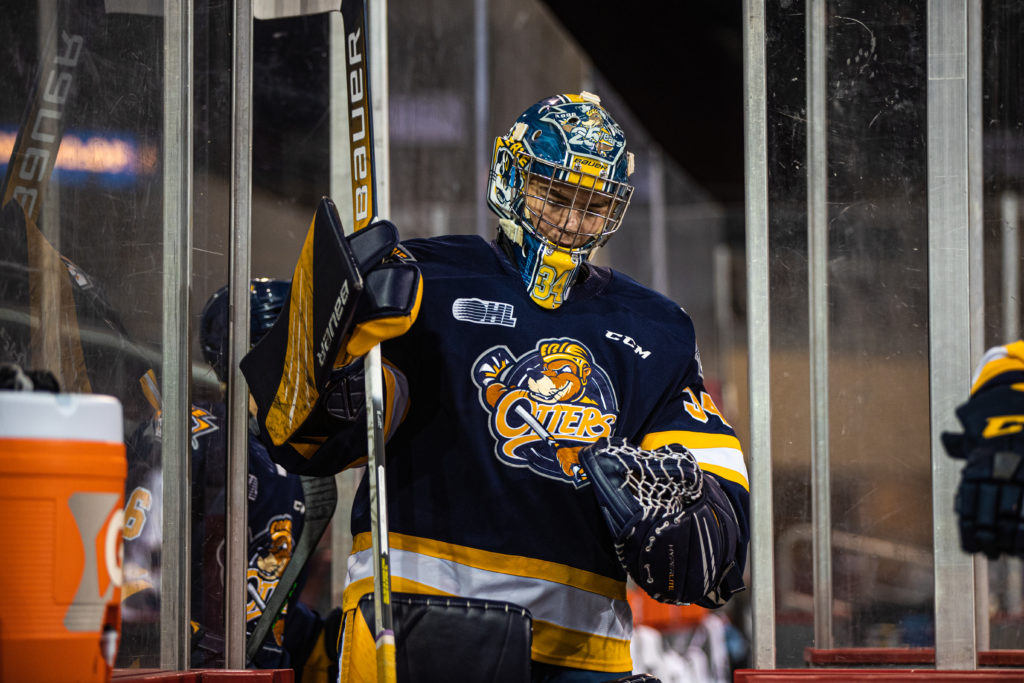 Erie, Pennsylvania – It was the return to hockey for Erie Otters, as the team started their campaign with a long-weekend road trip in Eastern Ontario.

Up against formidable foes in the Ontario Hockey League’s Eastern Conference, the Otters would come away with a point. The season would open on Thursday night as the Otters would enter the Peterborough Memorial Centre to battle the Petes. After grabbing 2-0 and 4-2 leads in the game, Erie would settle for a point in a 5-4 shootout loss. Erie would head east to Kingston for Friday night against the Frontenacs, and would be stonewalled by a fantastic goaltending performance from the home team in a 3-1 loss. After an off day for travel, the Otters would battle the Ottawa 67’s in the Canadian capital on Sunday, dropping a 4-2 decision.

After a tough eastern swing to start 2022, we spotlight three stars from the weekend road trip.

Averaging four penalty kills per-game over the course of the weekend, Erie’s undermanned unit didn’t miss a beat in the first three games. Lead by second-year Forward Carey Terrance, the penalty kill was called upon in five-on-four and a couple five-on-three situations, and masterfully killed off every shorthanded minute. Included in these kills were multiple high-quality scoring chances shorthanded – a sure-sign of things to come for the special teams group.

However, the red herring in this celebration is the high-quantity of kills the team was forced to go on. The ability to reliably kill off penalties can be a gamechanger in close games. If the Otters can maintain the same strict-standard of penalty killing this season, they’ll be a tough test for power playing teams.

After playing a teens-worth of games in his debut 2021-22 season, the talents of second-year Goaltender Marshall Nicholls would be called upon heavily to kick off the new year. For Nicholls, it would be three busy nights of shot-blocking – with statistical improvements made every night.

His debut in Peterborough would see the Waterloo, ON native stop 21/25 in regulation, and stop 2/3 in the shootout. He’d follow-up this performance with a 2.03 GAA in Kingston on Friday night, stopping 15/17 in a 3-1 loss.

In what could be described as his most impressive game yet as an Otter, Nicholls was relied upon in a major way on Sunday’s matinee against Ottawa. Pitching a shutout first period after recording 16 saves on a relentless 67’s offense, Nicholls would go on to make another 18 stops in the game – including a major penalty kill save in the late third. Despite stopping 34/37, Erie would fall 4-2. Nicholls would record a .919 SV% in the loss.

Nicholls has showed signs of what could be a very solid Sophomore season. After his debut weekend, there’s a lot to like from #34.

The Breeze is Back.

Looking to build off of a breakout 2021-22 season, Brett Bressette would find at least a point in every game of opening weekend. In the first game of the new year, Bressette would find a goal on the power play and an assist in the Otters shootout loss. He would continue to gather assists in the ensuing two games, getting one on Friday in Kingston and Sunday in Ottawa.

Just like the start of last season, Bressette is the current team-leader in points with four, and will look to continue to be an offensive asset into the new weekend.

Erie will get back to work on Tuesday afternoon, as the team prepares for a final season-opening road stop in Mississauga before home opening against the rival London Knights on Saturday, October 8.