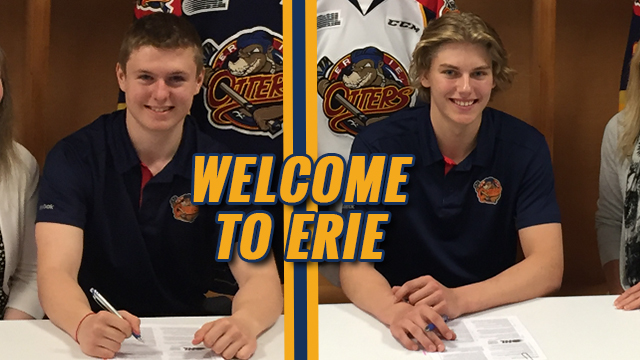 “I’m thrilled and excited to have the opportunity to sign two very quality individuals,” General Manager Dave Brown announced. “We look forward to watching the development and growth of both Allan and Jack as they grow as hockey players and young men.  We are confident that they will assist us in our continued pursuit of excellence and eventually become leaders within the Otters organization where they will carry on our tradition and culture.”

McShane, selected by the Otters 19th overall in the first round this past April, captained the Toronto Marlboros to an OHL Cup Final berth and finished the year with 33 goals and 63 points in 62 games played throughout 2015-16. The 5’11”, 183-pound forward hails from Barrie, Ontario and won a silver medal with Canada at the Lillehammer 2016 Youth Olympics, where he recorded four goals and six points in six games played.

“It’s amazing,” McShane said, “the reality of that moment to sign with everyone and my family around me is something I’ll keep with me. I’m an Erie Otter.”

Duff, drafted 57th overall by Erie in the third round, appeared in 34 games on the blue line for the Greater Kingston Frontenacs in 2015-16, posting two goals and 26 assists while recording 26 PIM. The Kingston, Ontario native stands at 6’1”, 177-pounds, and played in all five games for Team OMHA Black at the 2016 OHL Gold Cup.

“I’m very honored and excited to be a part of the Otters organization,” Duff stated. “My experiences with the organization so far have been unforgettable. I’m looking forward to being back in Erie for the main camp.”