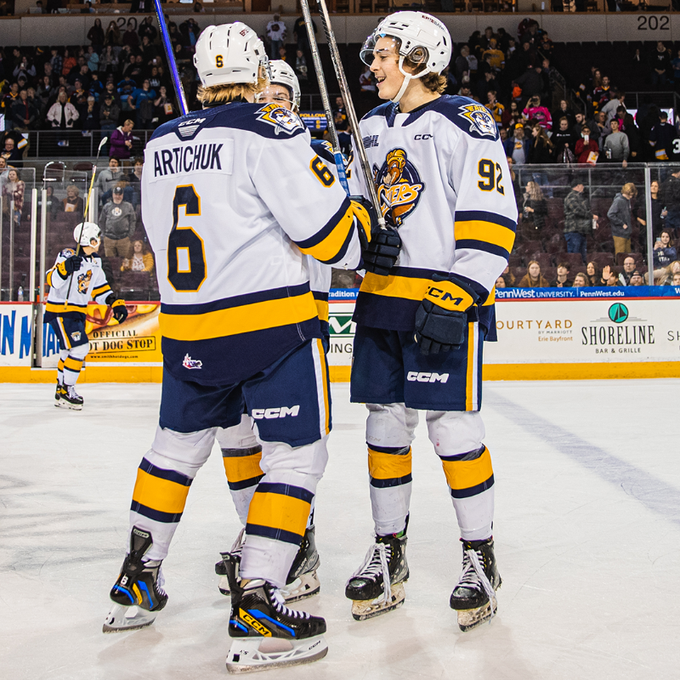 Erie, Pennsylvania – An Erie Otters team that looks to build off their positive play of late will put their talents to the test in three road games against top teams in the OHL Western Conference.

Erie will get things going Thursday night in Windsor for the last meeting of the season between the star-crossed foes. The team will transition to Sarnia for their third matchup of the season against the Sting on Friday night. An off-day Saturday will see the Otters travel back to the States for a Sunday mid-afternoon game in their second matchup against the Flint Firebirds.

A solid weekend of hockey was played by the guys in navy and gold as Erie was able to grab 3/6 points against teams above them in the standings.

Erie started things off against the Owen Sound Attack on Thursday evening. In a game that saw Erie down 4-0 early, the comeback kids were able to tie the game in the third period and then once again in the period’s final minutes to force overtime. Erie would fall short in OT, 6-5, but grab its first point of 2023. Erie would welcome in the Oshawa Generals for the first time in nearly three years, but fall short 4-1.

The Erie faithful as well as the team knew that it was important to get a victory in the home weekend, and Monday would be the answer. Erie would defeat Mississauga 2-1 to get their first win of 2023, as well as first wins for interim head coaches Vince Laise and Wes Wolfe.

Erie moves their record 13-21-1-3, still outside looking in at the OHL Western Conference playoff picture. If there is anything we saw from the previous weekend, it’s that this team will compete, and no task is too big for them. The team also has a chip on their shoulder to continue grabbing points, especially in games against the league’s toughest conference foes.

The tandem duo of Bruce McDonald and Taeo Artichuk were the players to beat last weekend, playing heroics with a bevy of points. Artichuk and McDonald would get the two goal in Monday’s victory against the Steelheads – part of a four point (2G+2A) weekend for Artichuk,, while rookie McDonald would have three points (2G+1A). Their depth-scoring contributions were critical for Erie’s weekend-closing success.

The top team in the OHL Western Conference are first up for the Otters. With a record of 26-9-3-1, the Windsor Spitfires are on a four-game win streak – soundly defeating Flint, London, and two against the Saginaw Spirit, who are all top six teams in the Western Conference.

Windsor added top-level talent in the week before the trade deadline, as NHL fourth-overall pick and ex-Kingston Frontenac Shane Wright (Seattle) was acquired by the team. He joined the OHL’s leading goal-scorer (30), and Spitfires leader in assists (25) and points (55) Matthew Maggio (New York Islanders). In net look for the hot-gloved Joey Costanzo, second in the OHL with a .911 SV%. Windsor’s week starts at home against the Otters before heading to Barrie and Oshawa for the weekend.

The recently-familiar Sarnia Sting are up next to the Otters – a team Erie has struggled against in their previous two matchups. Sarnia has been on the up-and-up since the trade deadline, adding a couple of highly-touted Mississauga Steelheads in Luca Del Bel Belluz and Ethan Del Mastro, as well as former Otter Christian Kyrou (Dallas). OHL points-leader (62) Ty Voit leads the team offensively. Sarnia sits in fifth place in the Western Conference with a 19-14-4-2 record. The Sting play in one other game this week, a Saturday game versus the Kitchener Rangers.

The weekend ends back Stateside for the Otters, as the 19-18-2-1 Flint Firebirds host a Sunday 4:00 P.M. puck drop for the second meeting of the season. Gavin Hayes (Chicago) and Amadeus Lombardi (Detroit) lead team goal-scoring with 23 each. Lombardi also leads the team in points with 51, while defenseman Dmitry Kuzmin (Winnipeg) leads in assists with 29. Flint will travel to Sault Ste. Marie on Friday before playing both Saginaw on Saturday, and Erie on Sunday. 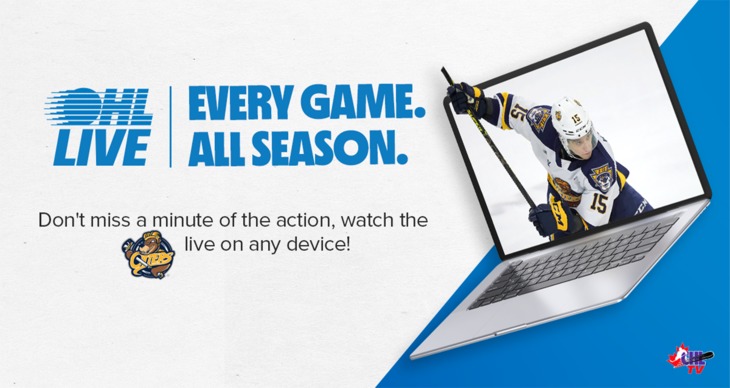 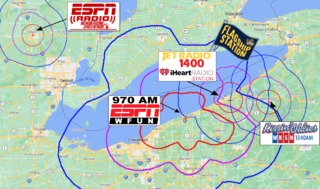 The four-game road trip comes to an end on Thursday, January 26 in St. Catharine’s against the Niagara IceDogs. Erie will then come back home for UPMC Health Plan Member Appreciation Weekend, as the team hosts the Kitchener Rangers on Saturday, January 28 for Hockey Fights Cancer (pres. by UPMC Health Plan & UPMC Hamot) with specialty HFC jerseys. The weekend comes to a close on Sunday, January 29 for Sunday Family Funday against the Niagara IceDogs – with fans invited to a post-game skate on the ice. 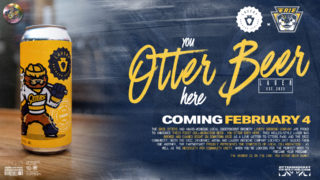