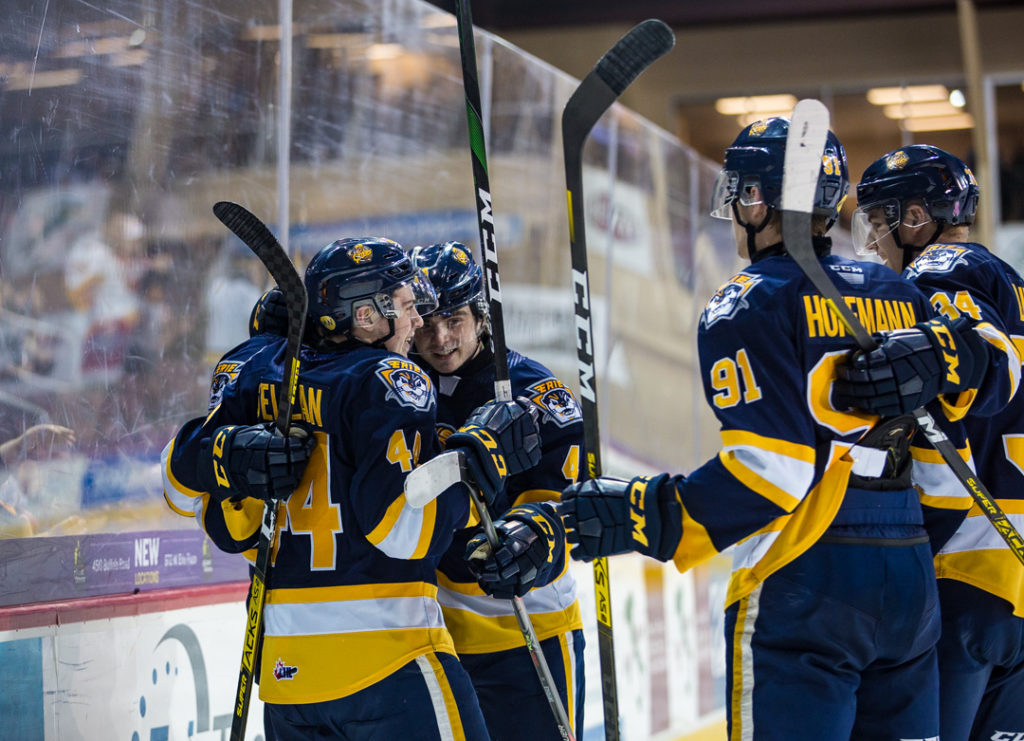 Erie, Pennsylvania – The Erie Otters downed the Guelph Storm 4-3 at the Erie Insurance Arena Wednesday night to extend their playoff cushion over the Soo Greyhounds to five points.

Erie took a 1-0 lead four minutes and 37 seconds into the game when Chad Yetman sidestepped Fedor Gordeev at the blueline and skated up the right side of the ice before netting his 40th of the season, marking the 16th time an Erie Otter scored 40 goals in a season. Guelph would get a great chance to tie the game nearly ten minutes later, but Daniel Murphy stopped Jacob Roach on the play. Roach turned on the jets and skated behind the Erie defense before cutting in front of the net and trying to get Murphy moving. The goaltender read Roach perfectly and didn’t budge, giving no room to shoot at. Both teams traded possessions, and on an ensuing play, Yetman denied a 2-on-1 chance by stealing the puck on an impressive back-check. Despite Erie’s defense by committee during the opening frame, Guelph tied the game at the 15:48 mark. Keegan Stevenson carried the puck from the right circle to the slot, where he was turned around and lost control. Daniil Chayka grabbed the loose puck and roofed it from in tight while Murphy was screened by Stevenson to tie the game 1-1. Determined to finish the first tied, Jacob Golden made a diving recovery to stop a breakaway chance with the final seconds running off the clock.

The action picked up past the halfway point of the middle period when Murphy made a solid glove grab to stop Guelph pressure off a turnover. Murphy followed up the previous play by following a point-shot through traffic and once again, plucking it out of the air for a stoppage in play. After steady work by their netminder, the Otters offense went back to work and Erie took a 2-1 lead off Yetman’s second of the night. Maxim Golod set up Yetman for a far-out shot that found the twine at 14:25. The Storm did not shy away, and Pavel Gogolev wristed home a shot from the right faceoff dot to tie the game 2-2, 69 seconds later. Once again, the clubs went to the intermission even on the scoreboard.

The Otters wasted no time in the third period, scoring 48 ticks into the final stanza. Daniel D’Amato entered the zone off the hop, circled the left side of the ice and finished the play with a wraparound goal to take control of the game 3-2. Erie extended its lead to two goals just minutes later when Brendan Hoffmann slid the puck across the ice to Brendan Sellan who tapped in his tenth of the year. Guelph flirted with a comeback and Gogolev scored with the extra-attacker on the ice with 45 remaining, but Erie held on to gain two points.

The Erie Otters visit the Niagara IceDogs Saturday, March 7, for a 7 p.m. matchup at the Meridian Centre.