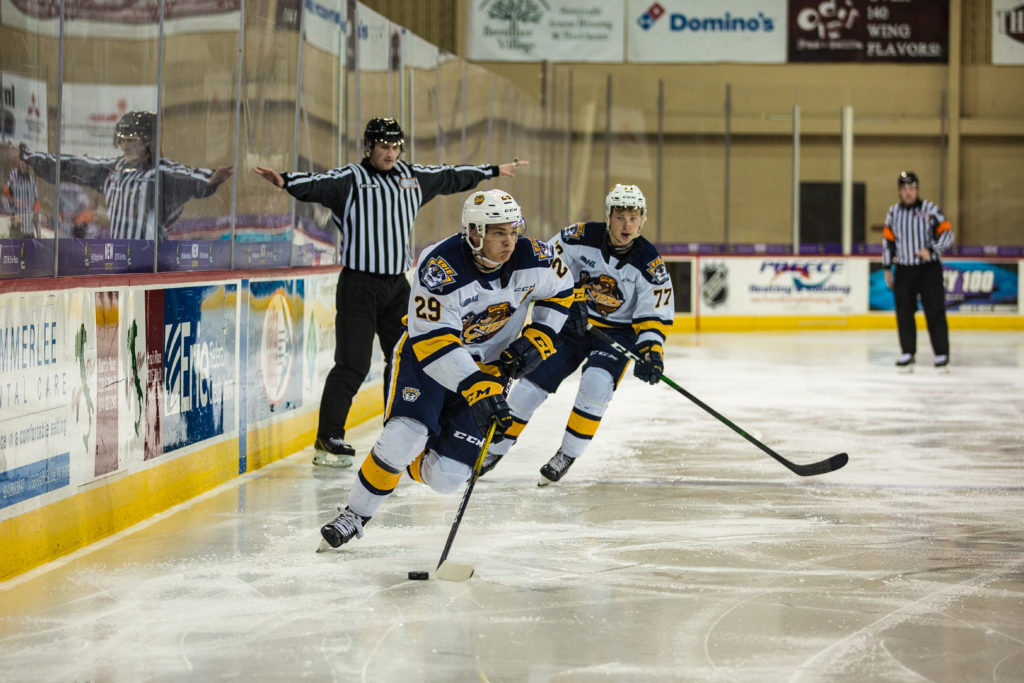 Oshawa, Ontario – The Erie Otters defeated the Oshawa Generals 4-2 in Oshawa Friday thanks to a hat-trick from Chad Yetman and a four-assist performance by Jamie Drysdale.

Erie goaltender Daniel Murphy fought off an Oshawa breakaway chance in the latter half of the first period to keep the game scoreless after one frame. The Otters dominated the Generals in the shot column through 20 minutes of play and took a 18-8 shot advantage into the first intermission in the 0-0 game.

Yetman broke the ice just 27 seconds into the second period with a powerplay goal assisted by Drysdale and Maxim Golod. Less than two minutes later, Brendan Sellan added to the Erie lead with a goal from Drysdale and Elias Cohen. Yetman notched his second goal of the game at the 7:35 mark of the middle stanza. The goal resulted from sound puck movement between Golod, Drysdale and Yetman on the powerplay, giving Erie a 3-0 lead. Oshawa’s Brett Neumann got the Generals on the board less than five minutes later, but the Otters went into the intermission ahead 3-1.

Oliver Suni scored just one minute and 46 seconds into the final frame, cutting the Otters lead to one goal. Oshawa defenseman Nico Gross tied the game at three, but the goal was immediately challenged for goaltender interference by Erie head coach Chris Hartsburg. The Otters won their first challenge attempt of the season as Serron Noel of the Generals interfered with Murphy as the shot went through. Just seconds after the puck was dropped following the overturned Oshawa goal, Yetman completed his hat-trick from Jack Duff. Drysdale earned his fourth assist of the game on Yetman’s breakaway goal at the 12:53 mark of the third period, which was Yetman’s 100th career OHL point.

The Erie Otters are back in action Sunday, November 24, when they host the London Knights at the Erie Insurance Arena for a 2:00 p.m. matinee.