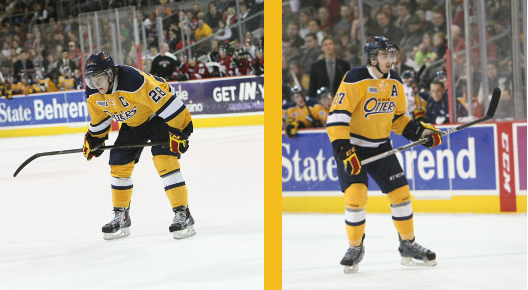 Connor Brown of the Erie Otters is the OHL’s Player of the Month for January after leading the league in scoring with 29 points in 12 games with a league-high 13 goals along with 16 assists and a plus-minus rating of plus-8.  The Toronto Maple Leafs prospect becomes the third Otters’ forward to claim the award this season following Connor McDavid in October, and Dane Fox in November.  Brown recorded a point in 10 of his 12 games played including eight multi-point performances and became the first player in the OHL to reach the 100-point mark this season.  He produced a career-high six points on January 12 with two goals and four assists as second star of a 9-0 win over the Windsor Spitfires, and also recorded two hat-tricks as part of two four-point games last month including January 17 as first star of a 6-3 win over the Kingston Frontenacs, and January 26 as first star of a 5-4 win over the Oshawa Generals.

Brown, a 20-year-old from Etobicoke, ON, is playing in his third OHL season with the Otters.  Erie’s captain has been signed to an entry-level contract by the Maple Leafs after being selected in the sixth round of the 2012 NHL Draft.  The OHL’s Top Scorer so far this season, Brown has 37 goals and 66 assists for 103 points in 51 games and now holds the Otters’ record for points in a single season surpassing Cory Pecker’s franchise mark of 99 points recorded in 56 games played in 2001-02.

Adam Pelech of the Erie Otters is the OHL’s Defenceman of the Month for January after leading all blueliners in scoring with 17 points, all of them assists, in 10 games played while recording the league’s fourth highest plus-minus rating at plus-13.  The New York Islanders prospect returned from representing Canada at the 2014 IIHF World Junior Championship and helped the Otters earn eight victories in their final 10 games played last month to maintain the league’s second best record.  Pelech recorded seven multi-point games in January including a career-high four assists on January 12 as part of a 9-0 win over the Windsor Spitfires.

Pelech, a 19-year-old from Toronto, ON, is playing in his fourth OHL season with the Otters.  He was selected by the Islanders in the third round of the 2012 NHL Draft after earning OHL Scholastic Player of the Year and Top High School Student Awards that season.  Currently tied for third in scoring among defencemen, Pelech has already achieved a career-high with 41 points in 43 games played this season.