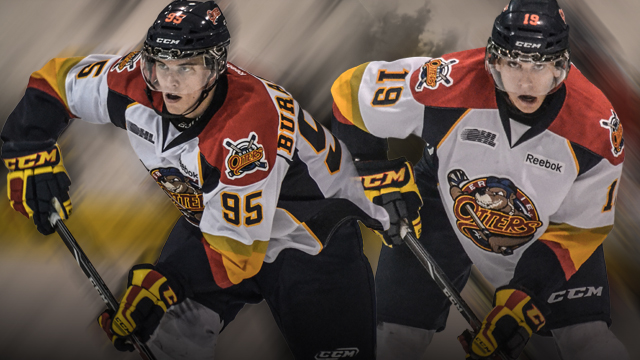 The Ontario Hockey league announced today their top performers for the month of March, which included two Erie Otters. Andre Burakovsky was named OHL Player of the Month while Dylan Strome collected OHL Rookie of the Month for their performances during March.

Andre Burakovsky is the OHL’s Player of the Month for March becoming the fourth different Erie Otters’ forward to earn the award this season following teammates Connor Brown, Dane Fox, and Connor McDavid.  The Washington Capitals prospect averaged two points per game last month with 24 points in 12 games including a league-high 14 goals to go along with 10 assists while also recording a league-high plus-minus rating of plus-22.  He produced a seven-game point streak including five multi-point games to finish the regular season highlighted by a five-point performance in their final game on March 15 matching a career-high with two goals and three assists as second star of an 8-4 win over the Sarnia Sting.  His offensive contributions helped lead the Otters to their best record in franchise history including 52 wins and 106 points, while his seven points including six goals in five playoff games against the Saginaw Spirit helped the Otters advance to the Western Conference Semi-Finals.

Burakovsky, a 19-year-old from Malmo, Sweden, is playing in his first career OHL season with the Otters.  Selected by the Capitals in the first round of the 2013 NHL Draft, the 23rd overall pick tied for 14th in OHL scoring this season with 87 points in 57 games scoring 41 goals and 46 assists.

Dylan Strome of the Erie Otters is the OHL Rookie of the Month for March after leading all rookies in scoring with 15 points in 12 games including two goals and 13 assists while posting an impressive plus-minus rating of plus-17.  Last month the former GTHL Player of the Year set a pair of personal bests including his first career three-point game with three helpers March 5 in an 11-2 win over the Plymouth Whalers followed by his first two-goal game March 7 as second star of a 6-1 win over the Windsor Spitfires.  Strome also finished the first round of OHL Playoffs second in rookie scoring with five assists in five games against the Saginaw Spirit helping the Otters advance to the Western Conference Semi-Finals.

Strome, a 17-year-old from Mississauga, ON, was selected second overall by the Otters in the 2013 OHL Priority Selection.  The Toronto Marlboros grad finished the regular season sixth in rookie scoring with 10 goals and 29 assists for 39 points in 60 games played.

In all, the Erie Otters have represented eight of the 24 total players recognized by the OHL in their monthly honors.