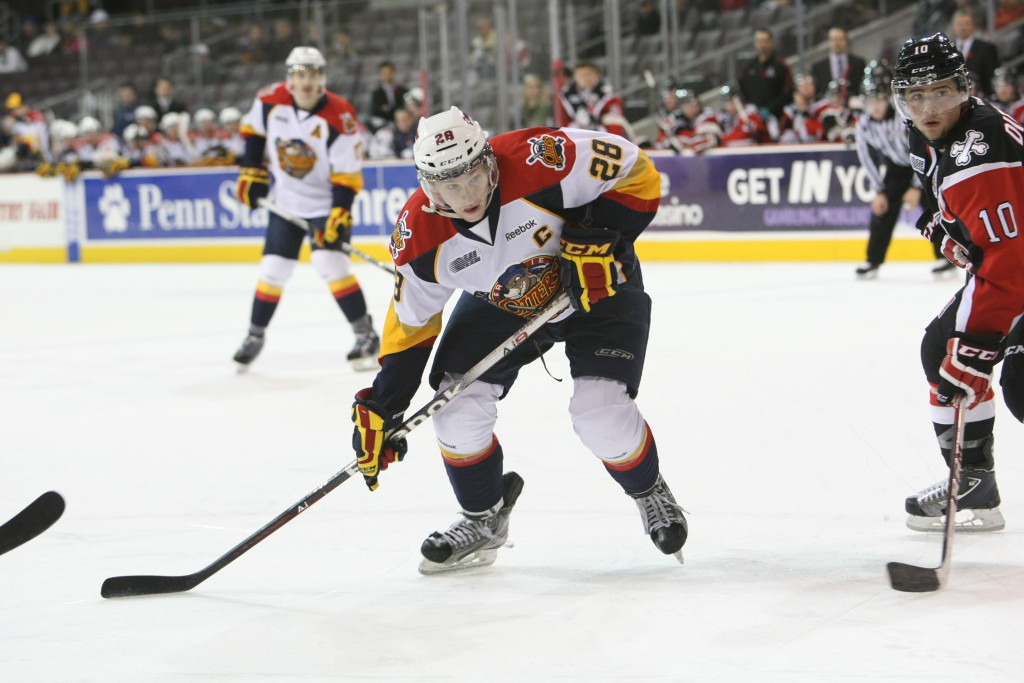 Belleville, Ontario – Connor Brown made Erie Otters history Monday night, as he recorded his 100th point of the season on an empty net goal in the final minute of the Otters 4-1 win over the Belleville Bulls.

Monday’s matchup between the Otters and the Bulls was the make-up date decided on after the game was postponed from its originally schedule date of Saturday, January 25. The extra day in Oshawa did not bother the Otters as they leave Belleville with the two points.

Belleville kept the game close with some help from goaltender Michael Giugovaz, who made a few key stops early in the game. Giugovaz stopped Dane Fox three times in tight, and also denied Andre Burakovsky in the first frame.

With some momentum from their net minder, and a power play opportunity, the Bulls struck first in the second period when Aaron Berisha backhanded a rebound off the end boards past Erie goalkeeper Devin Williams. The Otters answered with a power play tally of their own, with Dane Fox netting his first goal in four games. Dylan Strome blasted another one past Giugovaz 1:46 later to give the Otters a 2-1 lead into the second intermission.

Erie continued on the offensive in the third period, when Andre Burakovsky banged home a rebound for his 27th goal of the season. It all led to an empty net late in the third where Connor Brown would make franchise history. Picking up the clearing attempt in the neutral zone, Brown fired home the empty net goal for his 36th of the season and notched his 100th point of the year sending the Otters to a 4-1 final.

Erie continues on the their five game road swing with a trip to St. Catharines, Ontario to take on the Niagara IceDogs Thursday night.