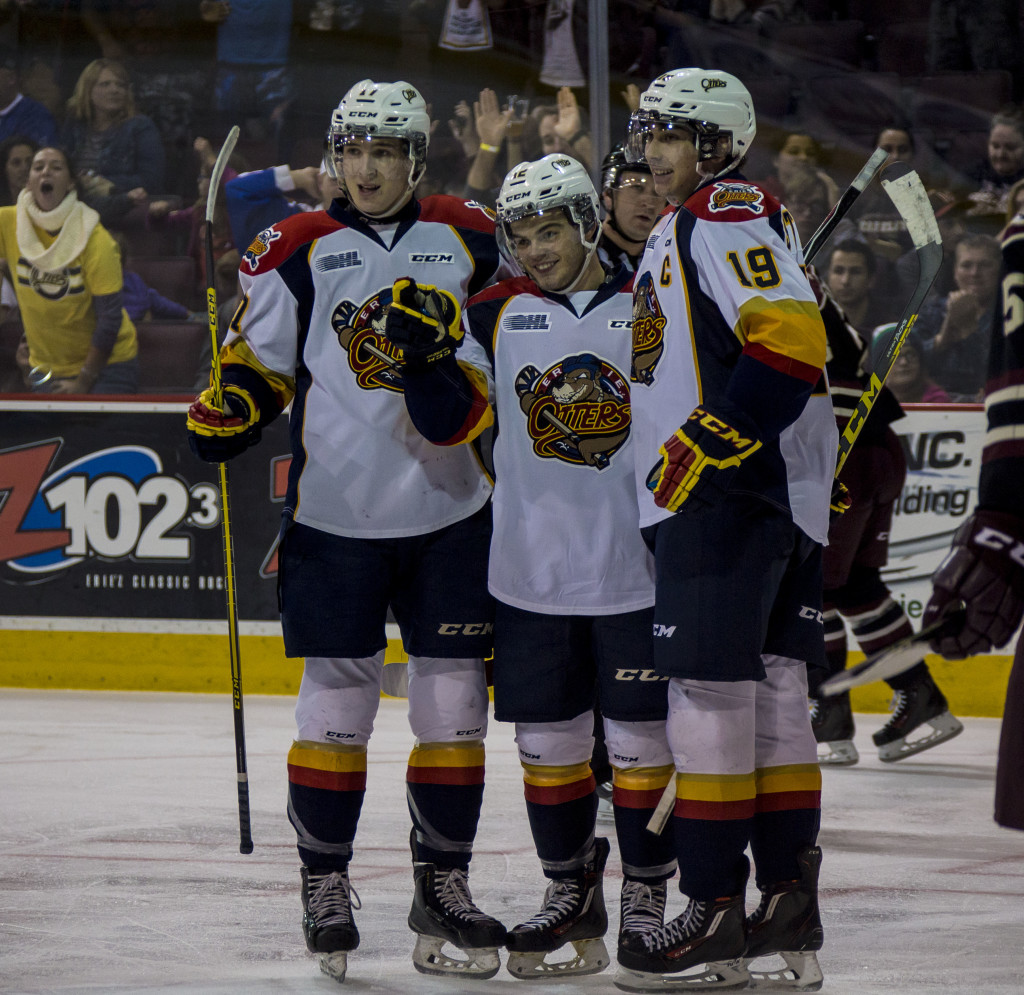 The Erie Otters got a monster night of production from its first line trio consisting of Alex DeBrincat, Dylan Strome, and Taylor Raddysh on their way to a 7-2 rout of the Peterborough Petes at Erie Insurance Arena Friday night.

While the first meeting between these two teams went to a shootout before determining a winner, tonight’s game was dominated by the Otters from beginning to end. Less than 30 seconds into the game, Jake Marchment stuffed in a loose puck to give the early advantage. It took 50 seconds for Erie to double its lead courtesy of Dylan Strome. His goal at 1:17 made it 2-0 Erie. Strome’s scoring touch was on display again in the period when he netted his sixth of the season at 4:16. Both of Strome’s goals were assisted by line mates Alex DeBrincat and Taylor Raddysh. The Otters power play would cash in next. Alex DeBrincat’s third goal on the man-advantage this season extended the Erie lead to four with 3:09 remaining in the period.

In the second period, Taylor Raddysh put one another puck past Dylan Wells, but the referees determined the Otters were offsides prior to the goal. Shortly after the referee’s review, Peterborough’s top point man Hunter Garlent scored his seventh of the season unassisted, cutting Erie’s lead to three at 6:22. Erie gained the momentum right back two minutes later. The Pete’s Jonathan Ang was called for cross-checking and Taylor Raddysh netted one on the man-advantage to score the Otters second power play goal of the night and make it 5-1.

Erie’s penalty kill went to work for the third time when Erik Cernak was called for holding at 17:49 in the second. Not only would the Otters kill their third penalty of the night, but they would get their first shorthanded goal of the season. The second goal of the game for Alex DeBrincat came on the penalty kill and made the score 6-1 entering the second intermission.

After the eleventh goal of the season by Peterborough’s Greg Betzold made it 6-2 early in the third, DeBrincat completed his goal trifecta. He buried his OHL-leading 20th of the campaign and tallied his third hat trick of 2015-2016 and made the score 7-2 halfway through the final period all the way until the final horn. The trio of DeBrincat, Strome, and Raddysh combined for 14 points in the contest.

The second game of the Otters five-game home stand will be tomorrow night beginning at 7 p.m. against the Windsor Spitfires.