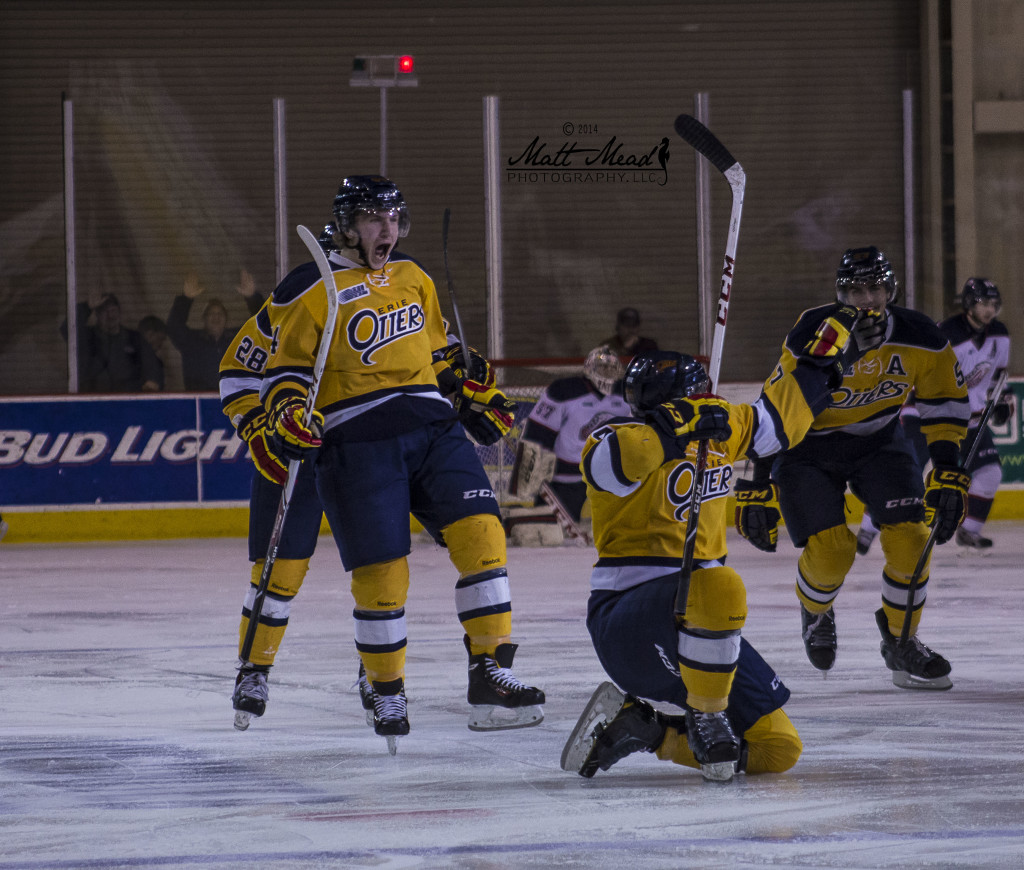 Erie, Pennsylvania – Dane Fox is the hero for the second straight night for the Erie Otters as his overtime goal gives Erie the game 4-3, sending them to Saginaw with a 2-0 series lead over the Spirit.

The extra period was needed after the late rally in the third that saw Saginaw tie the game at three with 2:41 to play in regulation. Fox’s overtime heroics give the Otters their first win in a game two of a series since March 25, 2005.

Andre Burakovsky picked up right where he left off Friday night, opening the scoring midway through the first with a laser beam of a wrist shot that beat Saginaw goaltender Jake Paterson. Burakovsky’s third goal of the playoffs is tied for the lead league. Erie led 1-0 after the first period.

Dane Fox also continued his game one production by notching his second of the postseason early in the first period to give Erie a two goal lead. Justin Sefton got Saginaw on the board when his point shot found its way through traffic to beat Devin Williams. The Otters stormed back to retake their two goal lead. Connor Brown set up Adam Pelech, who was entering the offensive zone on an odd-man rush, for a one-timer that blew past Paterson. Erie led 3-1 after two periods.

Saginaw fired back in the third in attempt to avoid trailing in the series two games to none. Former Otter Luke Cairns beat Williams to bring the Spirit within one. Then with 2:41 left in regulation, Cody Payne worked his way into enough open space to wire a shot past Williams, knotting the score at three.

In the overtime period, the Erie Otters top line was called upon in the early going to end the game. Dane Fox was set up in tight by Connor McDavid but the shot caught the crossbar and popped out of play. McDavid would find Fox one more time later in their shift, and this time Fox would not miss the mark. The CHL’s regular season goal scoring champion beat Paterson for his second of the night giving the Otters a 4-3 decision and a 2-0 lead in their Western Conference Quarterfinal series.

Devin Williams stopped 22 shots on the way to his second playoff victory. Connor McDavid recorded three primary assists after being held scoreless in game one. The Erie Otters will travel to Saginaw Sunday afternoon in anticipation of Monday night’s game three at the Dow Event Center.