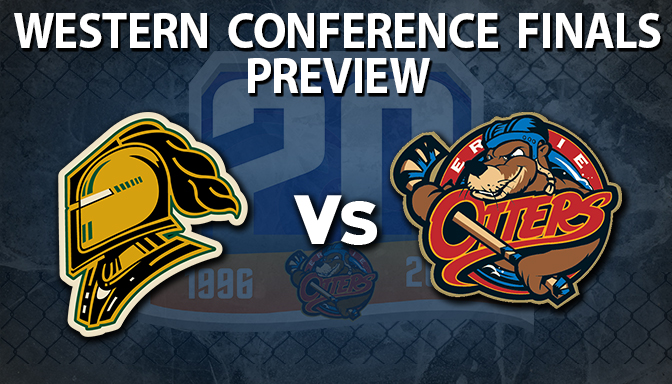 The Otters and Knights not only split the season series at three games apiece, but both teams finished with 105 points at the conclusion of the regular season, reassuring how evenly matched both teams are with each other. London forced a winner-take-all season finale for the OHL’s top overall seed in the postseason by defeating Erie at the Budweiser Gardens on March 18. The Otters bounced back a day later in game 68 to clinch the regular season title and the OHL’s top overall seed for the postseason. Dylan Strome was Erie’s top scorer in the season series with 11 points (2 G, 9 A). The Knights were led by Mitch Marner, who had 9 points (1 G, 8 A).

2015: Erie defeated London four games to none in the Western Conference Semifinals

The Otters road to the Western Conference Finals went through the eighth-seeded Saginaw Spirit and the seventh-seeded Sault Ste. Marie Greyhounds. Erie was the only team in the OHL playoffs to complete a sweep in the first round, dispatching the Spirit four games to none. The Otters ran into a tougher test in round two in the Sault Ste. Marie Greyhounds who were fresh off their upset of the West Division champion Sarnia Sting. After Erie won games 1 and 2 at home, the Soo handed the Otters their first loss of the postseason in Game 3. The Otters wouldn’t drop a game after that, however, and ended the series in five games. Dylan Strome leads the way for Erie in the postseason with 10 goals and 18 points in 9 games. Alex DeBrincat is currently riding a league leading nine-game point streak this postseason with 16 points.

London earned the third seed in the Western Conference and matched up against the sixth-seeded Owen Sound Attack in the first round. Despite dropping games 2 and 5 at home, London ended Owen Sound’s season in six games to move on to the Western Conference semifinals. There, the Knights would matchup against the fourth-seeded Kitchener Rangers. London had a much smoother time against Kitchener, winning the series in four straight games. Mitch Marner and Matthew Tkachuk are tops in the OHL postseason with 24 and 22 points apiece.

The second-year forward from North York, Ontario is the X-factor for the Knights. It is undeniable that the first line of Marner, Tkachuk and Dvorak is going to produce goals, but for London to have a chance in the series they are going to need depth scoring. Throughout the playoffs Pu has provided that depth scoring with seven goals. Pu did not impact much in the regular season series between the two sides with two assists, but has the potential to be a game changer in the Western Conference Finals. A big reason the 17-year-old has stepped into the limelight is due to the loss of rookie Max Jones, who will not be back untill game seven.

The experienced third line has been producing points for the Otters in the postseason, however they will not be relied on for their offensive production this round. Betz, Fellows and Pettit will be tasked with marking the Knights first line throughout the series. While the third line may not have the wheels like London’s trio has, but they are extremely sound and disciplined defensively. It is key for Betz and his line mates to be physical on Marner, Tkachuk and Dvorak as well as containing them to the outside in Erie’s zone. If they can limit odd man breaks and not allow the Knights top line space and time, they will be more effective then any team who has attempted to controlling the dynamic trio of London.

Williams leads all playoff goalies with a 2.16 GAA, however his SV% ranks last out of all four remaining goalies in the OHL playoffs. A major reason the OA goalies SV% is at the bottom of the barrel among active net minders is the fact that he has over 100 less shots faced than the three remaining goaltenders. It should put people at ease that argued Williams’s heavy payload in the regular season would have him exhausted come playoff time.

London has received grade-A goaltending from second-year goalie Tyler Parsons. He is second among all playoff goalies with a .919 SV% and clocks in at third with 282 total saves in 10 games played. Parsons has the most incomplete resume among active met minders due to being a relatively new goalie but has competed all season like an elite tender. The 18-year-olds success has translated to him moving up the NHL Central Scouting North American goaltender rankings from sixth to third.