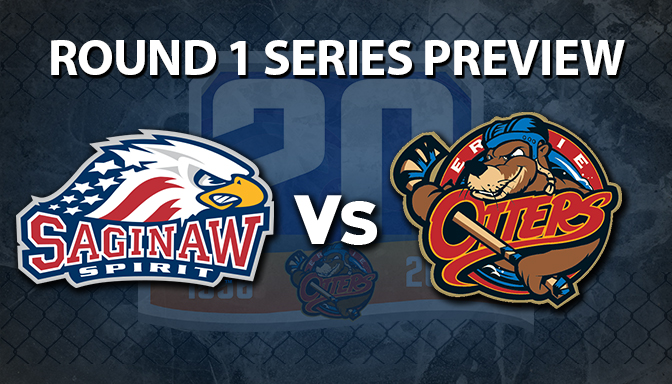 The Otters enter the 2016 postseason as the number one seed for just the second time in team history. Their first round matchup will be against the eighth-seeded Saginaw Spirit of the West Division. This series marks the first meeting between these two squads in the playoffs since the 2013-14 season, where the Otters won the series in five games.

The Otters have had their hands full when playing the Spirit this season. Saginaw managed two wins in four matchups against Erie this season, including a 6-3 win at Erie Insurance Arena back in October. Saginaw also had a better goal differential versus the Otters in their regular season series, netting 13 goals to Erie’s 11. So while the Otters more than doubled the Spirit’s win total for the regular season, Saginaw proved to be a tough matchup head-to-head against Erie throughout the year.

Erie enters the postseason winning six of its last ten games, including a crucial win in the season finale against the London Knights to earn the OHL’s Hamilton Spectator Trophy as the league’s best regular season team. A 5-4-0-0 record in the month of March was not as dominant as the past two seasons when they went undefeated with 16 wins. However, the Otters have been much better at home with three straight wins at the Erie Insurance Arena. Due to injuries and suspensions on the blue line, Erie leaned heavily on its star players late in the season. Leading scorers Dylan Strome and Alex DeBrincat saw March as a productive month, tallying 19 points each in nine games.

Saginaw stumbled down the stretch with a 2-6-2-0 record in its last ten games in addition to winning just one of its last eight regular season tilts. The Spirit have been outshot in the past five games and allowed opposing clubs 27 power play chances in that span. Mitchell Stephens enters the postseason with the hot hand for Saginaw, totaling five goals and 11 points in eight March contests. 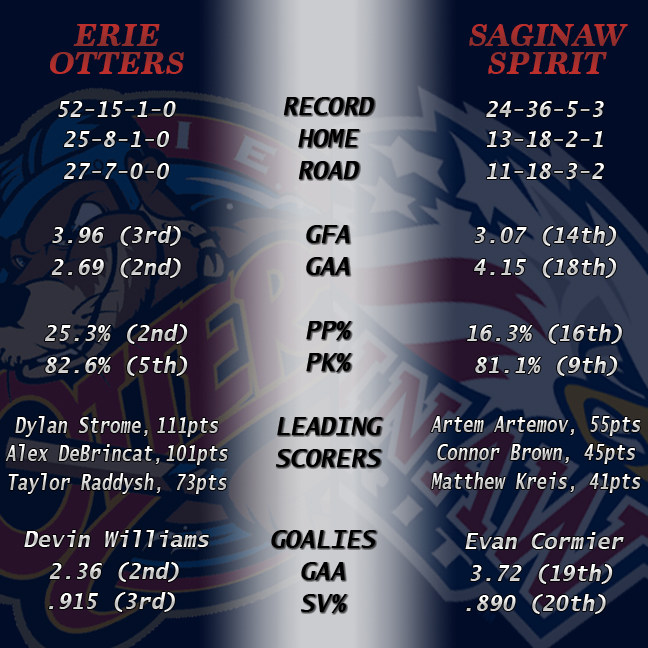 Arguably the Otters top performer of the season, Williams has been consistent at an elite level in his over-age season. He enters the postseason after a record-breaking year, setting an Otters franchise record with an OHL-leading 41 wins and finishing third in the league in save percentage and minutes played. In addition to setting the franchise season wins mark, Williams holds the team record for career regular season wins with 106.

One of just two goalies to play in more games this season than Devin Williams was Evan Cormier. While Cormier was second in the league in total saves and minutes played, his 27 losses are also the most in the OHL. This series will be the second playoff series of Cormier’s three-year OHL career. He suffered four straight losses and gave up 5.3 goals per game in Sault Ste. Marie’s sweep of the Spirit in round one a year ago. This season versus the Otters Cormier has faired very well, allowing just 10 goals in four starts and averaging 35 saves per game.

With 55 points in 67 games the 19-year-old has led the Spirit’s attack this season. Artemov has been a playmaker in the offensive zone for Saginaw with 36 assists. Despite leading the team in assists the Russian is not afraid to fire the puck on net with 228 shots on goals. While he is a creative player in the opposition’s zone, Artemov is a quality two-way forward that provides support in the defensive zone. Last year, in his first season with the Spirit Artemov recorded 32 points and an additional three points in his three playoff appearances.

The Otters have an overabundance of top end forwards with the likes of Dylan Strome, Alex DeBrincat, Taylor Raddysh and Kyle Maksimovich. However, a young forward like Vanya Lodnia can be a game changer, like we saw on the game-winning goal against the London Knights. The rookie can provide depth scoring that is crucial for the Otters to winning hard fought games. Lodnia has been a spark plug for the Otters when their challengers key on the top guns or head coach Kris Knoblauch needs to switch up the line combinations.