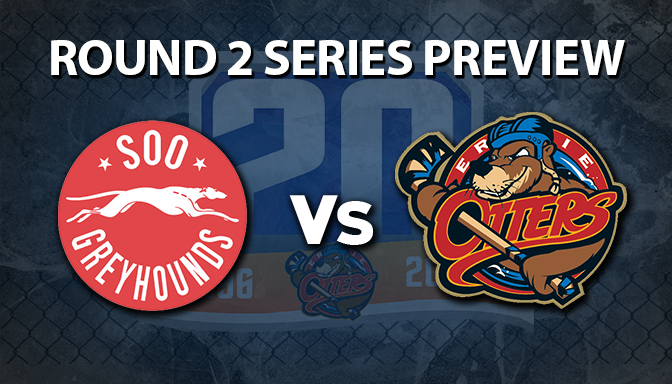 In a season series sweep, Dylan Strome led the scoring with a total of two goals and four assists, five of his six points came in the November contest in Erie. Travis Dermott has also performed well against the Sault Ste. Marie Greyhounds scoring both goals including the overtime winner in the 2-1 win early January. Both goaltenders for each side have played a game against the opposition. Devin Williams got the win over Joseph Raaymaker in the Erie Insurance Arena; while Jake Lawr snagged the overtime win against Brandon Halverson in the Soo. The Erie Otters and the Greyhounds penalty kill against one another has been exceptional, Erie logged a PK% of 90% in the two games and the Soo posted a respectable 80% on the PK.

The Otters cruised through their round one series against the Saginaw Spirit knocking them off in just four games. Erie recorded the second best goal differential in the league of plus 13 and were the only OHL club to sweep their series. The typical point collectors Dylan Strome and Alex DeBrincat led the charge for the Otters with nine points. Travis Dermott emerged from the shadows of the blue line to gather eight points and led all defensemen with two points per game. Despite losing starting goaltender Devin Williams for a game and a half the Otters were still able to post the third best goals against average of 2.75. Great special teams assisted the goalies. Erie ranked third in power play percentage with a 35% mark and led the league with a 90% PK, while only conceding one goal when down a man.

The seventh ranked Greyhounds took on the second ranked Sarnia Sting in a seven game series in which they came out victorious. Soo leaned heavily on the goaltending of New York Rangers prospect Brandon Halverson who recorded a .904 save percentage, which checks in at fifth in the OHL. The hounds won three of their four games in Sarnia including their 4-3 win in game seven. Boris Katchouk is tied for the most goals on the team with four and clocks in at third among rookies with six points. 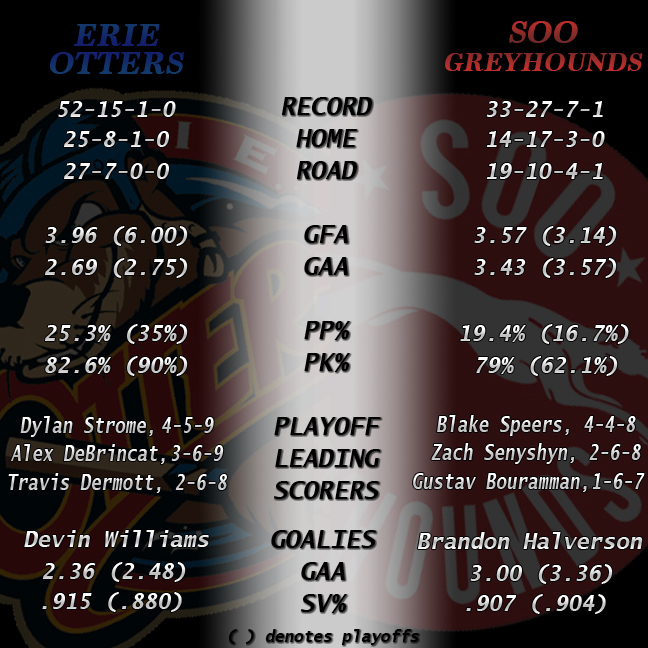 Maksimovich scored a goal in each of the Otters four conference quarterfinal games and his four game goal streak is the second longest in the OHL playoffs entering the second round. His scoring touch has been valuable to the Otters all season long. Maksimovich has shown flexibility playing with several different line mates all season without hindering his production. The 2016 NHL draft prospect has a knack for finding the soft spots in the defense and taking full advantage of his scoring chances, scoring on 33.3% of his shot attempts in the postseason.

The 2015 1st round pick of the Boston Bruins is tied for the Sault Ste. Marie team led with eight points in this postseason. Senyshyn was one of the OHL’s top goal scorers in the regular season with 45 goals, and his skill set allows him to impact the game in multiple ways. His solid skating puts him in advantageous positions on the ice where he can use his vision to dissect the defense. He isn’t afraid to get physical either, allowing him to thrive in the playoff environment. The Soo winger leads the team in plus/minus with a +5 rating in the postseason.

Before an early exit in Game 3 against Saginaw, Williams was a steady presence in net for Erie. The Otters did a good job keeping the Spirit away from Williams and faced the least amount of shots among qualifying playoff goalies. Williams did leave Game 3 due to injury and was not seen for the remainder of the series, but Jake Lawr adequately stepped in for Williams in Game 3 and earned the series-clinching victory in his first career playoff start in Game 4. Williams is expected to be ready to go for Western Conference semifinals against the Soo. He won his only start against the Greyhounds this season, a 6-3 victory on Nov. 28 at Erie Insurance Arena.

The primary reason Sault Ste. Marie was able to upset the West Division champion Sarnia Sting was the stellar play of Halverson. Halverson had no less than 33 saves in each of the four Soo wins over the Sting. Halverson was especially sharp in Game 4 where stopped 40 of 42 shots, including 12 in the overtime periods to secure the win. Halverson is a seasoned playoff goalie who has won 14 of 21 playoff starts. His only playoff series loss was the Otters in the 2015 Western Conference Finals. He lost his lone appearance against the Otters this season 2-1 in overtime in Sault Ste. Marie.