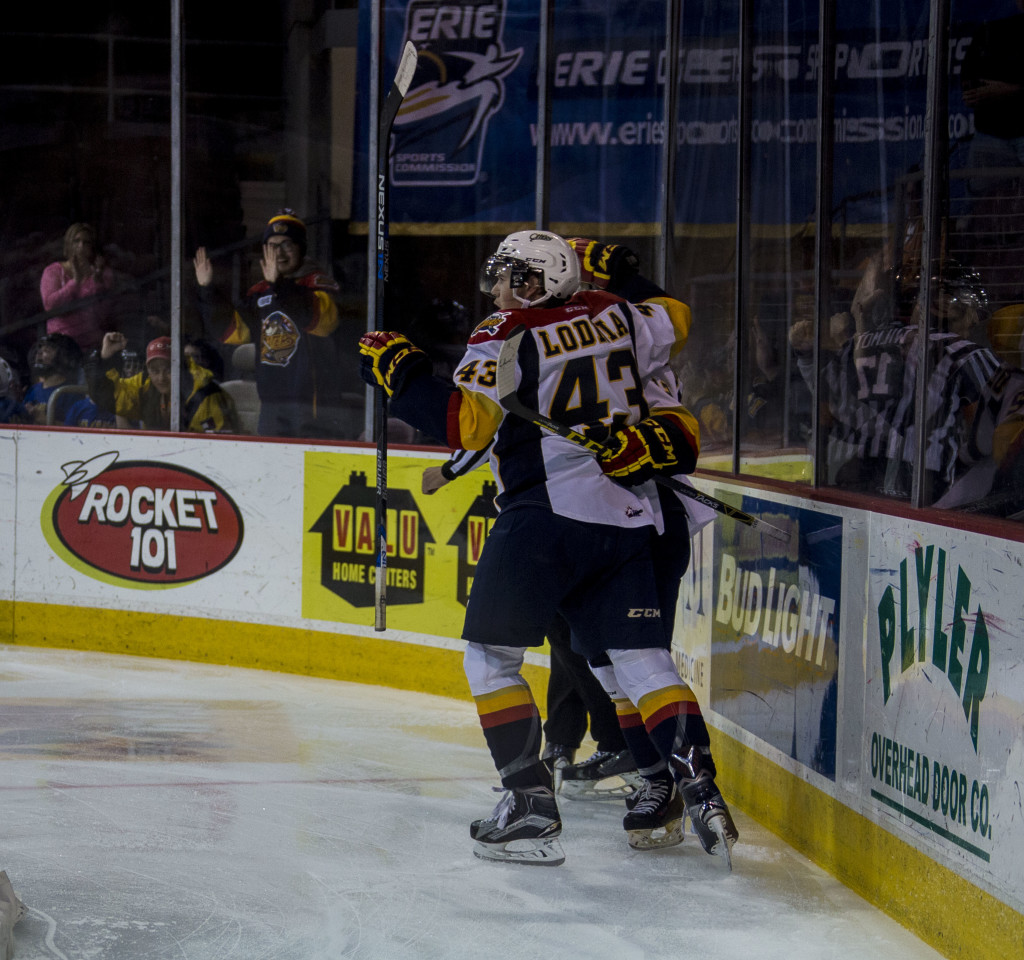 After a strong first two periods that included a first-period hat trick from Alex DeBrincat, the Erie Otters rolled to a 5-2 win over the Mississauga Steelheads at Erie Insurance Arena on Tuesday night. The first period would prove to be an impressive one from the Otters, espeically in DeBrincat’s case. Less than a minute in, Dylan Strome and Taylor Raddysh assisted DeBrincat’s first goal of the game to give Erie the early goal-advantage. At the 3:38 mark, DeBrincat got his second of the game after creating a turnover in the neutral zone followed by a nice passing series between he and Vanya Lodnia. Mississauga forward and former Otter Thomas Lattavo cut Erie’s lead in half on a shot from the point at 16:41, but the one-goal lead would soon go back to two courtesy of DeBrincat. After the Steelhead’s Jason Smith went the box for a slashing penalty, DeBrincat netted his third of the game at 18:41 on the power play, giving the Otters a commanding 3-1 lead heading into the intermission.In the second period, the Otters continued to dominate puck possession and it resulted in a goal for Erie’s fourth line. Lodnia put in a rebound for his third of the season and extended the Otters lead to 4-1 close to halfway through the period. The Steelheads scored their second goal with 5:44 on the clock on a wrist shot by Nathan Bastian. Erie would get the goal right back at 17:25 when Kyle Pettit fought his way in front of the net to finish the loose puck. The Otters led 5-2 at the break and outshot the Steelheads 39-16 through two periods. The third period would see no goals as Devin Williams saved all ten Mississauga shots in the period. At 12:39 in the period, Nicolas Hague received a match penalty for a slew foot on Vanya Lodnia. Erik Cernak and Everett Clark received minors for roughing proceeding the Hague penalty. Erie outshot Mississauga 50-29 for the game, improved its record to 14-2-1-0, and increased their point total to 29 with the win.The Otters are scheduled to play two more home games before heading on the road Sunday. They host the Oshawa Generals on Friday, November 13, with showdown with the London Knights to follow on Saturday, November 14. Both games are scheduled for 7 p.m.Your Iron Workers Local Union No. 3 Ironmen of the game:1) Alex DeBrincat – 3 G2) Vanya Lodnia – 1 G, 1 A3) Dylan Strome – 2 A