Knights Storm Back to Stun Otters 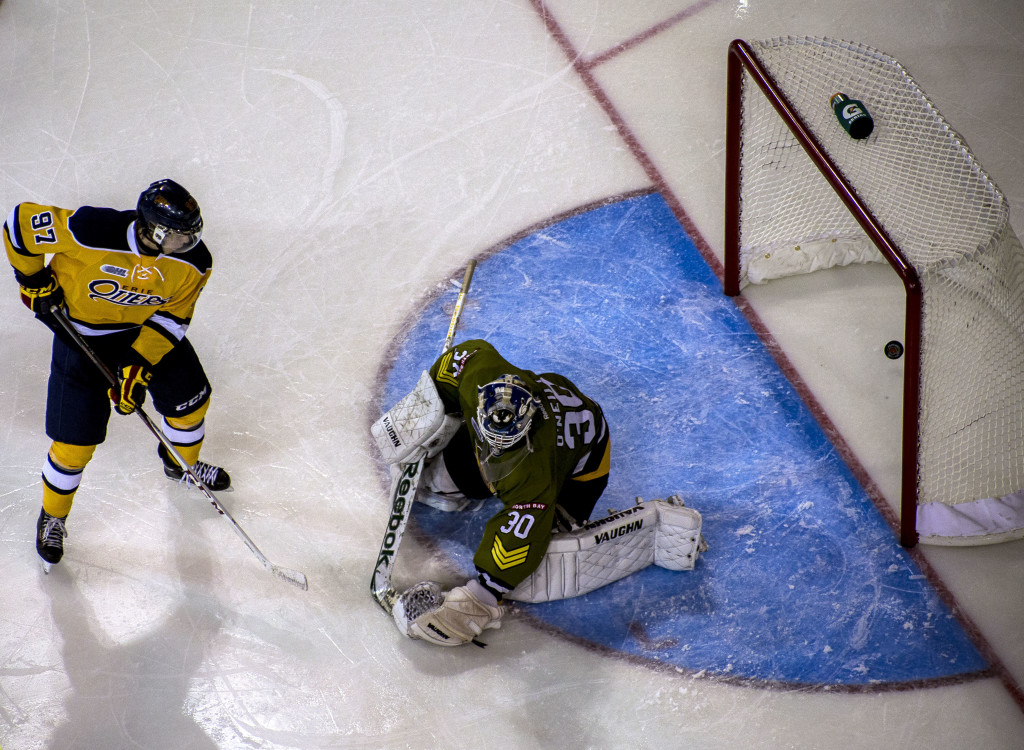 The third spot in the Western Conference was on the line, as only one point separated the two teams in the standings. Erie was looking to tie their franchise record for wins in a season while setting new record for home wins in a season.

Erie controlled the game early on. Andre Burakovsky netted his 33rd of the year when he gathered his own rebound in the slot and beat Knights goaltender Jake Patterson. Spencer Abraham’s seventh of the year on the power play at 7:55 of the first period gave the Otters a 2-0 lead. After killing a power play midway through the period, Connor McDavid was sprung through the neutral zone on a pass from Darren Raddysh. McDavid entered the offensive zone, turned defenseman Brady Austin inside out, and beat Patterson on the phenomenal individual effort to give Erie a three goal lead.

With a god lead already in hand, the Otters headed to the power play again late in the first period. The Otters, in a four-on-three situation, set up in the offensive zone. However, London’s Chris Tierney was able to break out through the neutral zone for a partial breakaway. McDavid’s back checking forced him off the puck, but Dakota Mermis followed up to beat Devin Williams and get the Knights on the board with 59 seconds left in the period.

The second period started with chances on both sides. Erie was unable to extend their lead despite power play opportunities. London held on down two, and got a break when Michael McCarron’s sharp angle shot snuck by Williams. Matt Rupert finished off a net front scramble to tie the game at three just 1:05 later.

In the final period, it seemed like overtime was imminent with both teams holding defensively. A late Erie power play gave the Otters a chance for the win before regulation time expired. The Otters ended up taking a penalty of their own, which neutralized their opportunity and handed London a chance to win it. Tierney found open space between the circles and wired home the game winner with 1:37 to play in regulation. Erie pulled Williams but could not find the tying goal as Josh Anderson netted the empty net goal.

The Otters head back on the road for a pair of games, starting with the Sarnia Sting Friday night.