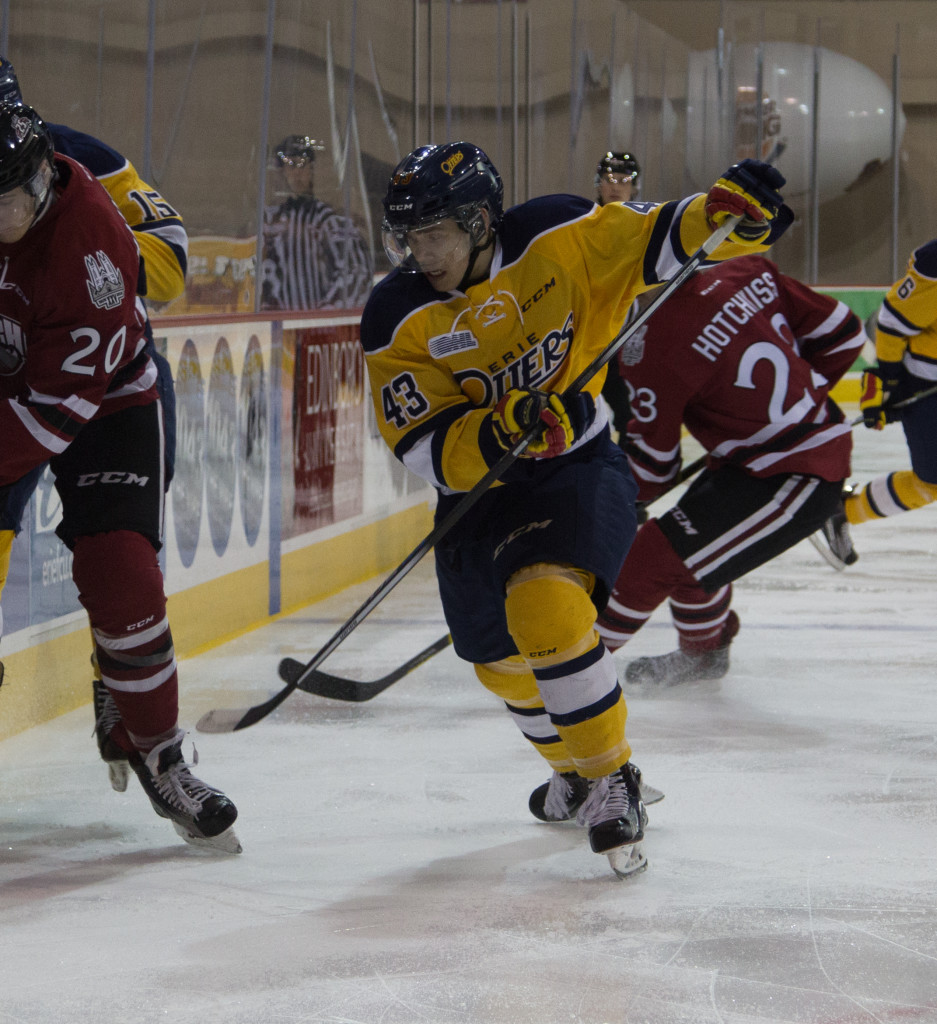 The Otters found themselves in a back-and-forth battle all night long with the Niagara Ice Dogs, but ultimately pulled out their ninth-straight road victory in overtime by a 4-3 score in St. Catharines, Ontario.

Niagara made the first move in this one by taking the early-advantage. The Ice Dog’s top scorer Jordan Maletta tallied his 11th of the season just over three minutes into the game. Scoring chances were few for Erie to begin the game, but they finally broke through at 17:45 in the period. Dylan Strome and TJ Fergus got assists on Taylor Raddysh’s tenth goal of the season, which tied the score up at 1 apiece before the end of the period.

Much like Niagara scored just over three minutes into the first period, the Otters scored 3:23 into the second period to take the lead. Erik Cernak powered his way around the net and went for a wrap around try that was initially stopped by Brent Moran, but Strome was right in front to finish the rebound. Strome’s second point of the night and tenth goal of the season put Erie up 2-1. Niagara was able to respond at 7:13 courtesy of Brendan Perlini’s unassisted effort. 2-2 was the score entering the third period.

Both penalty kills were strong in this game, but the Ice Dogs would cash in on a power play for the only special teams goal of the night. Mikkel Aagaard netted his third of the year at 11:43 putting Niagara ahead 3-2. Once again, the Otters were quick to respond, with Kyle Maksimovich scoring his sixth of the season less than a minute later to knot the score up once again. Devin Williams made a few key saves down the stretch to force overtime in St. Catharines.

In the overtime, it was another great play by Maksimovich that set up the Otters game-winning goal. His blue line-to-blue line pass connected was on the tape for Vanya Lodnia, who was all alone on the breakaway. He finished five-hole on Moran to give the Otters the golden goal and the 4-3 road victory. With their ninth straight road win, the Otters set a new franchise record for consecutive wins away from Erie, a record previously set in 2001.

Erie’s road trip will continue with a Saturday night showdown in Saginaw against the Spirit beginning at 7 p.m.

The Iron Workers Local Union No. 3 Iron-men of the game: