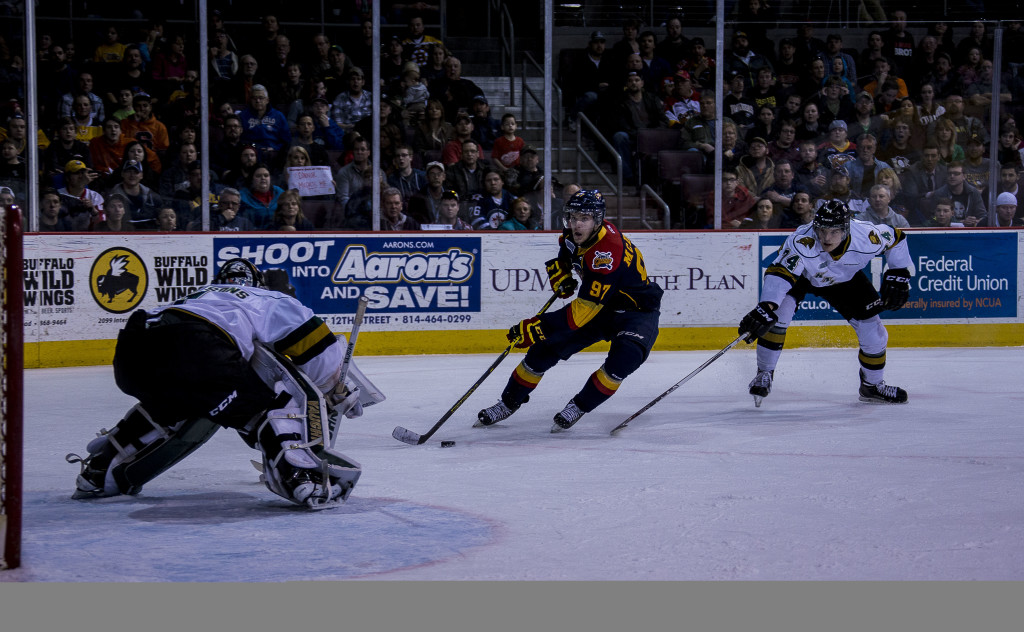 Erie, Pennsylvania – The Otters took a 2-0 lead on the series Friday night with a 7-3 win over London. Connor McDavid led Erie with five goals on the night, with Jake Marchment and Taylor Raddysh adding the other two.

Game two started out better for the home team than game one. The Otters killed an early penalty to McDavid and, as the captain left the box, he was able to find an opening behind Tyler Parsons to give Erie the early lead. Chances went back and forth with shots going high and wide for the Otters.

Devin Williams picked up where he left off in game one, making three big saves in a row to deny the Knights a place on the scoreboard. The Otters had a chance with a power play, but it was four-on-four that gave McDavid the open ice to fly down the right wing and beat Parsons, putting Erie up 2-0 to close the first.

The Knights gave Michael Giugovaz the nod in net to start the second period. McDavid and Dylan Strome both came close, but it was McDavid picking up the natural hat trick to give the Otters a three-goal lead. It didn’t take Marchment long to extend the lead for four goals, with Patrick Murphy picking up an assist on both goals.

Williams continued to deny the Knights, keeping London off the board with big saves including a pad save on Tait Seguin. Marchment nearly picked up his second, but McDavid flew into the zone and, the puck bouncing off a defender’s stick, found his fourth of the night.

Strome nearly scored early in the third but was robbed by Giugovaz. Chances continued to go back and forth with both goalies coming up big. Chandler Yakimowicz was sent to the box for interference after putting Kyle Maksimovich into the net, but on his way out of the box was able to put London on the board. The Knights scored again two minutes later, this one from Aaron Berisha. It took another two minutes for Jack Hidi to bring the Knights within two.

With just over four minutes to go, McDavid passed to Remi Elie in front of the net, but Elie was unable to capitalize. McDavid wrapped around the back of the net and put the puck in off Giugovaz for his fifth of the game. With Giugovaz on the bench, Williams made a big save to keep the Knights from notching a fourth, but Raddysh put his second of the playoffs into the empty net to solidify the Otters 7-3 win.

McDavid becomes the first player in Otters history to score five goals in a game, playoffs or otherwise. His seven goals are two short of the Otters record of nine in a single series, reached twice by Cory Pecker in 2001 and 2002. Elie netted three assists, while Murphy and Marchment both picked up two points.

The Otters travel to London for game three Sunday and game four Tuesday.