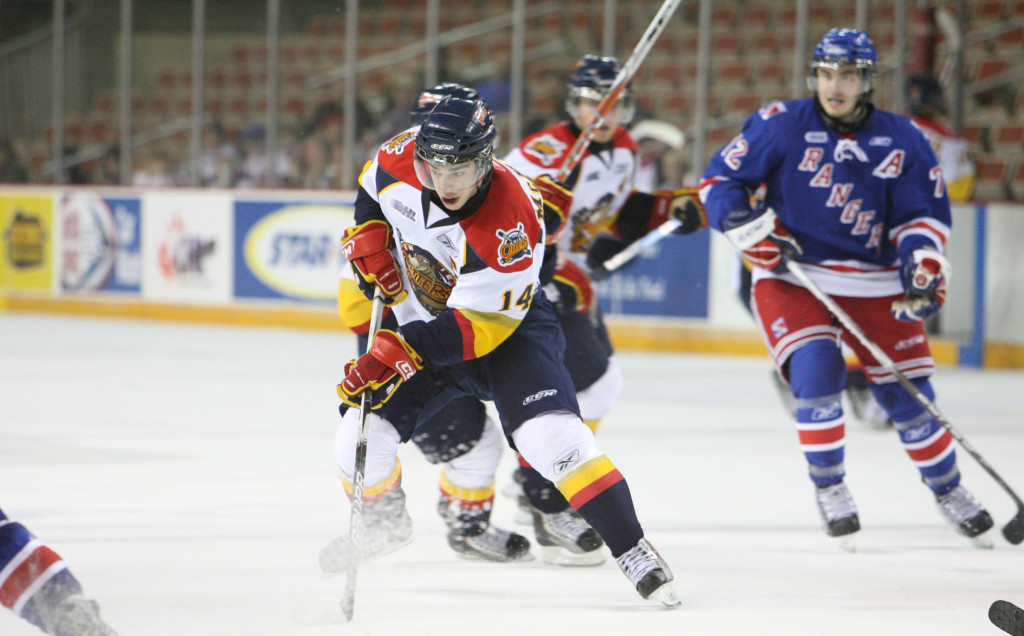 After seemingly having their names etched in stone on the Otters’ score sheet, the red hot line of Anothony Luciani, Brett Thompson and Phil Varone was held to only two points in Wednesday’s contest after combining for 42 points in the previous five games.

Erie was still able to pull out a 6-2 victory over the Western Conference leading Owen Sound Attack on the back of forward Greg McKegg, as the third-round NHL draft pick of the Toronto Maple Leafs was able to bust out of his slump in a big way.

McKegg, after going goalless in seven games, netted four goals in the Otters’ dominating victory. The strikes were the captain’s first goals since he scored a hat trick against the London Knights Jan. 28.

“It’s nice to have one of those nights where everything is going in,” said McKegg, who became the only Otter in franchise history to record two four-goal games in the same season. “It’s good to get two points. Wins are the most important thing.”

McKegg’s fourth hat trick of the season propelled his goal total to 38.  McKegg and winger Brett Thompson, who also lighted the lamp in the victory, are now tied for fifth in goals in the Ontario Hockey League.

It wasn’t only the sharpshooting that pulled McKegg from the slump – advice from coach Robbie Ftorek helped the Toronto prospect relax on the ice.

“It’s nice to talk to someone who has played the game,” McKegg said. “He knew what I was going through. You could tell I was gripping the stick too tight and wasn’t having fun out there. He told me to get back to basics.”

Winger Shawn Szydlowski was the catalyst for the offense as he assisted on all of McKegg’s goals. Szydlowski, who extended his point streak to 14 games, is the second Otter to join the 30-goal, 30-assist club this season.

Although only putting together one goal, Varone and Thompson were both able to prolong their season-high streaks. Varone now has a point in 14 straight games while Thompson has found the twine in each of his past six games.

According to Ftorek, for Erie to continue to be successful, the goals must be coming from both scoring lines.

“Everyone needs to chip in,” he said. “We’re fortunate to have a lot of guys that can step up.”

The six goals against the Sound point to a larger picture that the Otters have been painting – they aren’t intimidated to score in bunches against the OHL’s top teams.

“We have two of the best lines in the league,” Szydlowski said. “It’s getting close to playoffs so we’ve been focused and patient.”

According to McKegg, the success has come because of how many skaters have found their scoring touch.

“If you want to be successful you have to have depth,” McKegg said. “You have to be confident in the guys.”

The sixth-place Otters, who have scored 38 goals in the past six games, have received a boost from an effective power play. After going six games without a tally on the man advantage, Erie has averaged nearly two power-play goals per game over the last two-and-a-half weeks.

Despite their success on the power play, the Otters needed no such advantage to jump on the Attack early.

After maintaining offensive possession for the entire first minute in the game, forward Brett Appio began the goal-fest as his blind wrist shot from the half wall found its way past Owen Sound goalie Michael Zador, who lost his first game since Jan. 9.

The Otters never looked back as they held the Attack to only five first-period shots.

“Our guys played hard all night,” Ftorek said. “There are some nights where everything seems to be working. We were moving the puck and skating really well.”

The Otters will host the Niagara IceDogs Friday night at 7:00 p.m. Students that show a valid student ID at the Box Office can get into Friday’s game for $5.00. Saturday night, the Guelph Storm visit Erie for Greg McKegg Lithograph Night, presented by the “e”. For tickets, call 814-452-4857 or log on to ottershockey.com.