Otters Clinch Third in West in Win Over Sting 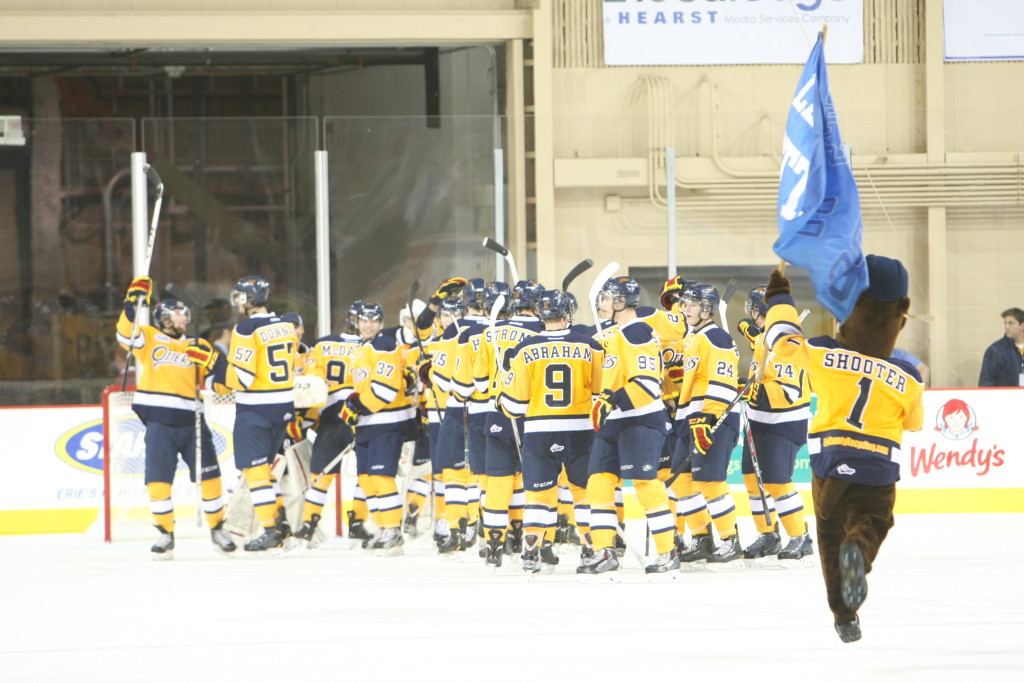 The Otters will have to wait until Monday to learn who their playoff opponent will be, as the Owen Sound Attack claimed the sixth seed with a shootout win over the Guelph Storm Saturday. The Saginaw Spirit can reclaim the sixth spot with a point in their final game of the regular season against the Sault Ste. Marie Greyhounds Monday night.

The Otters looked to finish their season on an eight game winning streak, and looked to be rolling early when Michael Curtis opened the scoring midway through the first burying and Andre Burakovsky pass over the blocker of Sing starter Taylor Dupuis. Nick Latta would tie the game at one with a one timer that beat Oscar Dansk 1:37 later. Brendan Gaunce gave Erie the lead back on his 30th of the season with 91 seconds left in the period. Erie led 2-1 after the first period.

Sarnia struck back with a three goal second period. Nikita Korostelev tied the game at two at 12:26 on the power play. Michael Curtis handed the Otters the lead back with his second of the night, his second two goal game in as many nights, at 14:55. Nick Latta would tie the game for the third time of the night fooling Dansk with a shot from the left wing circle. That would be all for Dansk in the night as he would exit the game with Devin Williams coming in as relief. Dansk allowed three goals on 11 shots.

Andre Burakovsky needed only eight seconds to give Erie their fourth one goal lead of the game, when he rifled a shot past Dupuis from the top of the left wing circle. The Otters one goal lead would not last long as Nikolay Goldobin would draw a penalty shot after being denied a breakaway scoring chance on a slash from Cory Genovese. Goldobin would beat Williams, tucking the puck in on the backhand to tie the game at four entering the intermission. That was the first successful opposition penalty shot since December 12, 2012, when Barclay Goodrow of the Brampton Battalion beat Oscar Dansk.

The final 20 minutes would determine the Otters playoff fate as Erie needed a point to clinch third in the Western Conference. Erie started the period determined, scoring two goals in the first 1:11 of the period. Brendan Gaunce buried the eventual game winner from Joel Wigle and Travis Wood to give Erie a 5-4 lead. Connor McDavid would follow that up with a beauty as he dangled his way through the Sting defense and beat Dupuis to give the Otters a two goal lead.

Erie was rolling from then on as they tallied two more goals to take the game 8-4. Andre Burakovsky would rip home his second of the night and fifth point of the game. Dane Fox added one in with under five minutes to go to finish his regular season tally at 64.

The Otters will wait for official word on their first round playoff opponent and schedule from the OHL. The league’s postseason is schedule to begin Thursday, March 20.