Otters close out road trip with 7-4 loss in Kitchener 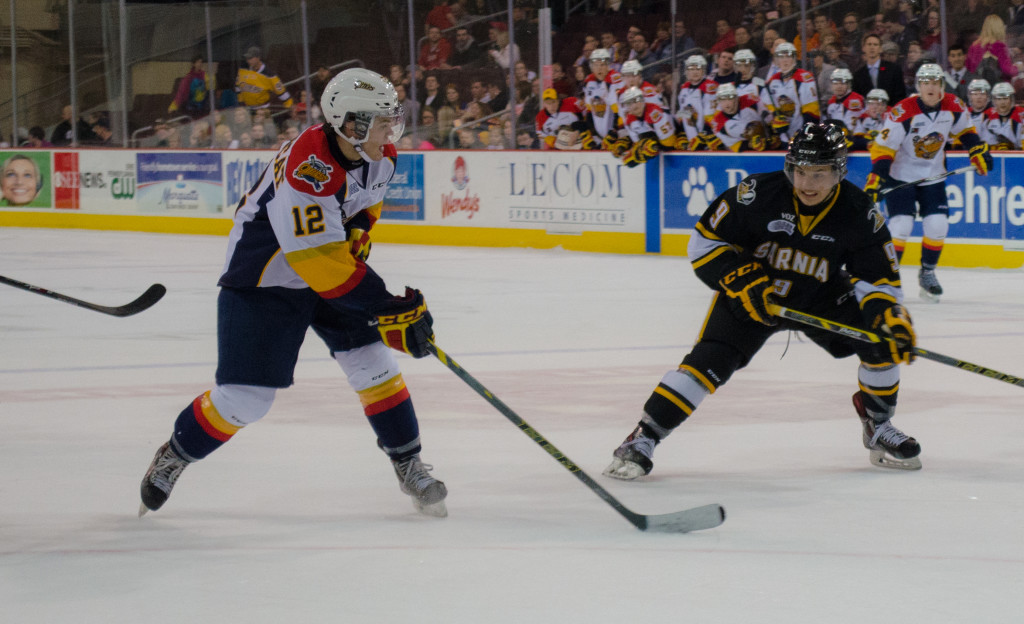 The Rangers got their Teddy Bear Toss over with quickly. Liam Maaskant put the puck in the net 1:12 into the game, making the fur fly. After a ten-minute clean up, Kitchener scored again, this time on the power play from Brett Pedersen.

Kitchener ran into penalty trouble late in the first. Max Iafrate and Curtis Meighan both heading into the penalty box, giving Erie a full 5-on-3. Alex DeBrincat scored his 24th of the season­–and 11th on the power play–to cut the Rangers’ lead in half. But with 32 seconds left, Brandon Robinson gave Kitchener their two-goal lead back.

Kurtis MacDermid was the one to pick up a quick goal to start the second period. His goal 52 seconds in once again brought the Otters within one. But Kitchener didn’t back down, and Adam Mascherin made it 4-2, before Pedersen scored his second of the game for the three-goal lead.

Nick Betz jumped into the scoring just after the halfway point of the period, making it 5-3 from Troy Donnay and Patrick Murphy. Donnay and Pedersen dropped the gloves after a hit on Travis Dermott, and after a short scuffle, the two were sent to the box for five minutes a piece. Justin Bailey and Ryan MacInnis extended the Rangers’ lead to 7-3 a minute and a half apart to finish the period.

Tempers flared to start the third. Pedersen, Cory Genovese, Gustaf Franzen, and MacDermid all spent time in the penalty box. The next goal (and the only one of the third period) went to Patrick Fellows who beat Dawson Carty–his third of the season–from Donnay. The Otters got a late power play opportunity, but the Rangers held the offense off the score sheet, and the horn sounded on the 7-4 final.

The loss is the third in a row for the Otters – and the first in regulation for Daniel Dekoning – after falling to Belleville and Oshawa over the weekend. The Otters head home Friday night to host the Saginaw Spirit before welcoming the Oshawa Generals Saturday.