Otters come back to defeat Knights, 5-2 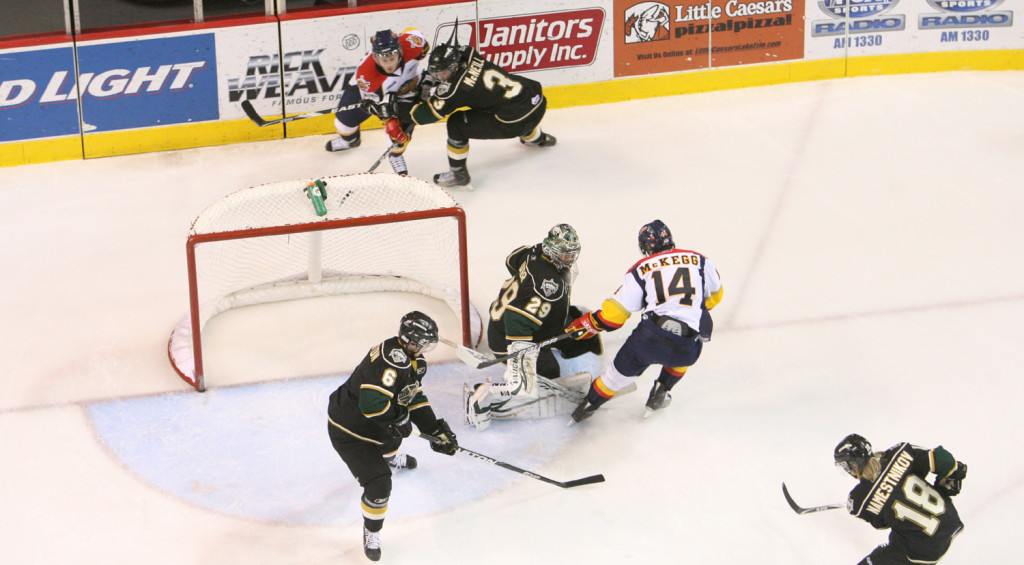 One day after Friday’s 12-3 demolition of the Barrie Colts, the Otters’ offense morphed from a unit clicking on all cylinders to one just going through the motions against the London Knights.

That is, until center Phil Varone had his say.

The former London Knight’s goal, his 18th of the season, cut the score to 2-1 and served as a wake-up call for a team that lay dormant for over one period.

Coach Robbie Ftorek said that the Otters spent the first twenty minutes showing the crowd how not to play hockey.

“They didn’t do anything in the first [period],” Ftorek said. “[The Knights] took the play to us. They were getting quality shots. “

However, according to right wing Anthony Luciani, Varone’s goal was just what was needed to shake the Otters from their sluggish start.

“It gave us momentum,” said Luciani, Varone’s linemate, about the goal. “That goal and the fans really got us going. It makes you go hard.”

The Otters took advantage of the momentum as defenseman David Shields notched his fourth goal of the season only two minutes later at the 16:44 mark.

Varone would later go on to tally two assists in the Otters’ 5-2 win, including one on Luciani’s game-winning goal only two-and-a-half minutes into the third period. Luciani batted in Varone’s cross-ice pass out of midair for his 16th goal of the season.

Luciani said that plays like his batted goal, which looked more like an A-Rod homerun blast than a hockey move, is the result of playing on a “lethal line.”

Varone said that the game-winner was result of familiarity between line mates.

“We saw how the defense was playing,” said Varone, a San Jose prospect. “We have pretty good chemistry, so when he looked at me I knew what he was going to do. I just tried to throw it in his direction.”

The eight minutes of outstanding Otters offense was an exception, not the norm, for the first forty minutes as London gained control of the game from the opening faceoff.

The Knights tallied goals at the 1:51 and 19:41 mark of the first period as leading scorer Jared Knight helped power the team to a two-goal advantage.

However, the Otters’ second and third period offensive explosion was enough to cause a London implosion as the Knights took four penalties in as many minutes to round up the final twenty minutes.

“We just kept playing hard,” Luciani said. “They eventually just got frustrated with themselves.”

It was during the game’s final power plays that the Otters clinched their victory.

Center Greg McKegg, who is ranked third in the Ontario Hockey League in goals, slammed home his 31st score while winger and alternate captain Shawn Szydlowski tallied his 22nd of the season and capped the Otters’ scoring.

It was the first time in a decade that the Otters claimed the season series over the Knights.

The 5-2 decision also helped leapfrog the Otters over the Knights in the Midwest Division and Western Conference as their points now total 46 – one more than the Knights.

The Otters are now in sole possession of the sixth spot in the conference and third place in the division and according to Ftorek, as long as the Otters keep playing their brand of hockey, they’ll make more moves up the standings.

The Otters complete their homestand Thursday night at 7:00 p.m. against the top team in the Ontario Hockey League, the Mississauga St. Michael Majors. It’s a Buck Night, with dollar Smith’s hot dogs, Coca Cola products, beer and popcorn. Tickets can be purchased through Ticketmaster, ottershockey.com or by calling 814-452-4857.