Otters come back to defeat Storm in OT, 7-6 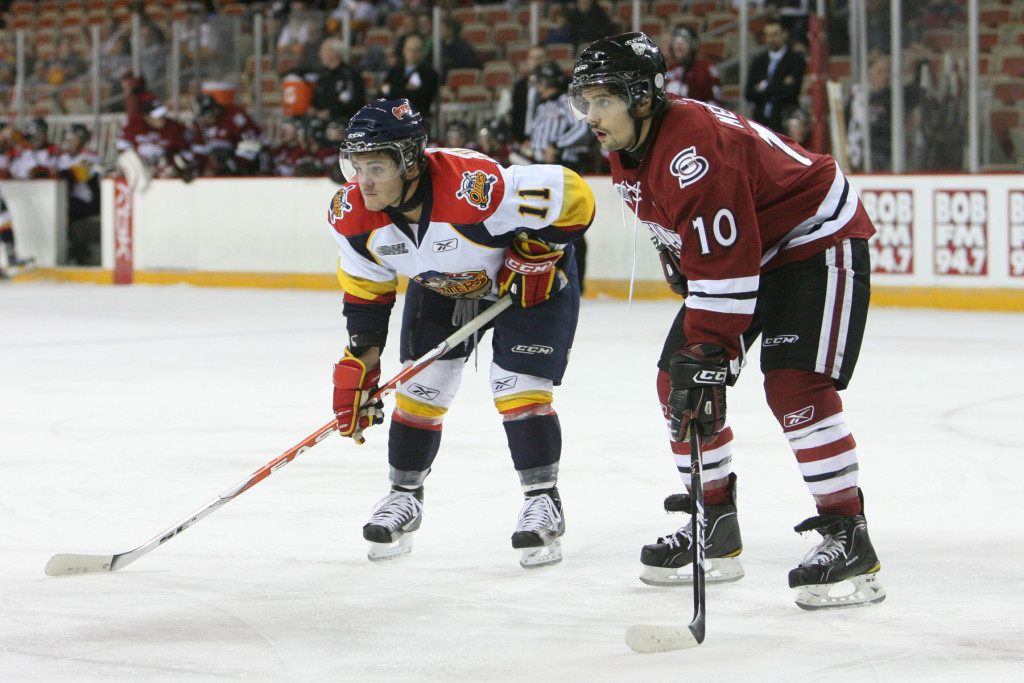 A determined effort by the Erie Otters and a hat trick by Greg McKegg (16-15-1-1) propelled the squad from a late two-goal deficit and into an overtime victory over the Guelph Storm, 7-6, at Sleeman Centre Sunday afternoon. The win was the Otters’ ninth in the last 12 games.

The Otters burst out of the gate with a strong start as they outshot the Storm, 12-6, in the first 12 minutes of play, but Brandon Foote was exceptional in net for the Storm in keeping the Otters off the scoreboard. The Storm then responded with a pair of power play goals by Peter Holland to open up a 2-0 lead.

Greg McKegg picked up a power play goal for the Otters in the final minute of play after a perfect feed by David Broll in front of the net, but Richard Panik made a sensational move for the Storm seven seconds later to regain the Storm’s two-goal lead heading into the intermission.

McKegg picked up his second goal of the game 1:09 into the second period during a 4-on-4. Szydlowski started a two-on-one into Guelph territory and found McKegg at the left circle, where the captain deposited his 23rd goal of the season over the left shoulder of Brandon Foote.

Panik picked up his second goal of the game at 7:14 to make it a 4-2 Guelph lead, but the Otters clawed back to within a goal at 16:26 after a great effort by Phil Varone. The overager streaked down the right wing of the Storm zone and put the puck around the right pad of Foote as his own teammate, Matt Paton, collided with him in the crease after what was a hard-working 12th goal of the season for Varone.

The third period started with a Storm power play goal by Holland, who picked up the hat trick 5:32 into the frame. Brett Appio converted on a breakaway at 7:11 for his second goal in as many games, putting the Otters within one. Once again, the Storm had an answer as Tyler Carroll scored 29 seconds later to make it 6-4.

A parade to the penalty by the Storm gave the Otters new life. Chris Van Laren took a tripping penalty at 12:25, followed by a double minor by Cody McNaugton for checking from behind 18 seconds later, setting up a long two-man advantage.

The Otters made sure to take advantage, as Anthony Luciani potted home his first goal of the game at 14:19 after tapping home a pass from McKegg.

The Storm had an answer for each Otters goal until the Otters were able to tie it up at 15:42, thanks to McKegg’s hat trick goal. The captain fired a shot from the slot through traffic to knot the game at six.

Luciani put home the game winner after taking a great pass from Phil Varone on a rush into the Guelph zone at the right circle, streaking towards the net and shoveling a backhander through the short side of Foote 32 seconds into the extra frame to seal the win for the Otters.

The Otters return home for two games before the Christmas break. Friday night at 7:00 p.m. the Brampton Battalion come into town for a $5 Friday, in which high school and college students can get into the game for $5 when they show their student ID. Saturday night is Guns and Hoses Night when the Otters host the Sudbury Wolves. Before the Otters game at 7:00 p.m. is a special hockey match between local police, fire and EMS units starting at 4:00 p.m. Mention Guns and Hoses Night and receive a $10 ticket good for both games, which proceeds going back to the Children’s Advocacy Center. Tickets are available for both home games through Ticketmaster, the Civic Center Box Office or by calling 814-452-4857.