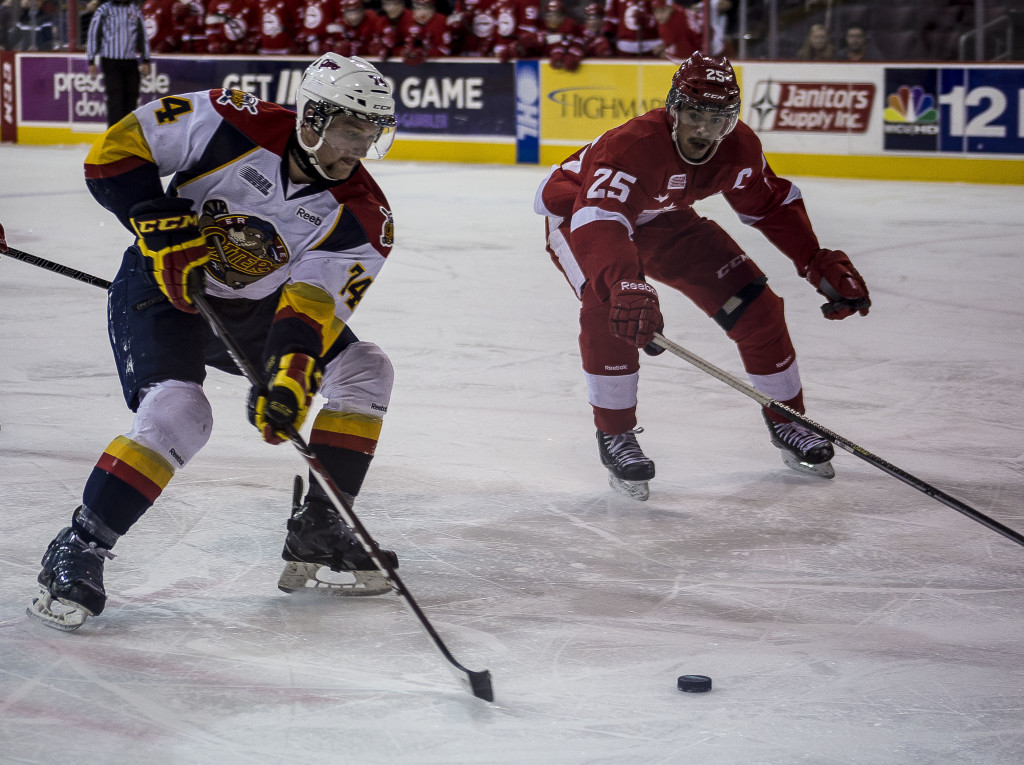 Erie, PA – The Erie Otters offense put on a show Sunday afternoon in front of a crowd of 6,286 as the team steamrolled the Windsor Spitfires 9-0 for their tenth shutout of the season.

The Otters offense scored nine goals in a game for the third time this season and recorded their largest margin of victory since January 14, 2011, when the Otters beat the Barrie Colts12-3. Oscar Dansk picked up his second shutout in a row and sixth of the season, tying the franchise record J.F. Peras set in 1999-2000.

The Otters jumped to it early with Dane Fox opening the scoring 3:33 into the first. Andre Burakovsky netted his 24th of the year on the power play at 6:04 to give Erie a two goal lead and chased starting goaltender Dalen Kuchmey out of the game.

Shortly after scoring, Burakovsky would take a hit to the head in the neutral zone from Cristiano DiGiacinto and would leave the game. DiGiacinto was assessed a five minute major and a game misconduct for the check to the head. Burakovsky was held out of the remainder of the game for precautionary reasons, but was said to be doing well post-game.

Alex Fotinos entered the game in goal as relief, but would not fare much better. Patrick Murphy would notch his third of the season late in the first period to give the Otters a three goal lead into the intermission.

Even with a three goal lead, the Otters did not take their foot off the gas as they would notch another four goals in the period. Connor Brown picked up his first of the night on the power play, with assists from Connor McDavid and Adam Pelech. Dane Fox fired home his 50th goal of the year at 13:13 of the second period. Spencer Abraham picked up a power play goal at 15:41 before Dane Fox completed his fourth hat trick of the season, scoring just 1:43 later.

With a commanding 7-0 lead after two periods, the Otters added some more gravy to their score, picking up two more goals in the third. Dalen Kuchmey would enter back in to the game, tagging out Alex Fotinos after allowing five goals in a period and a half. Connor Brown notched his 28th of the season two minutes into the third period. Then Connor McDavid scored a highlight reel breakaway goal, tucking the puck in past the outstretched pad of Dalen Kuchmey on the backhand with one hand on his stick.

Oscar Dansk stopped 26 shots in the effort, and has only allowed one goal in 154:12 minutes played since returning from the World Junior Championship. Dane Fox became just the second player in Erie Otters history to score 50 goals in a season, and is just two goals away from tying Cory Pecker’s single season record for goals scored set at 53. Connor Brown recorded a six points on the afternoon, while fellow forward Connor McDavid picked up a five point night. Adam Pelech had four helpers on the day and has eight assists in his last three games. The Otters are next out against the Kingston Frontenacs Friday at the Erie Insurance Arena with faceoff scheduled for 7 p.m.