Otters lock down Knights in 3-1 win 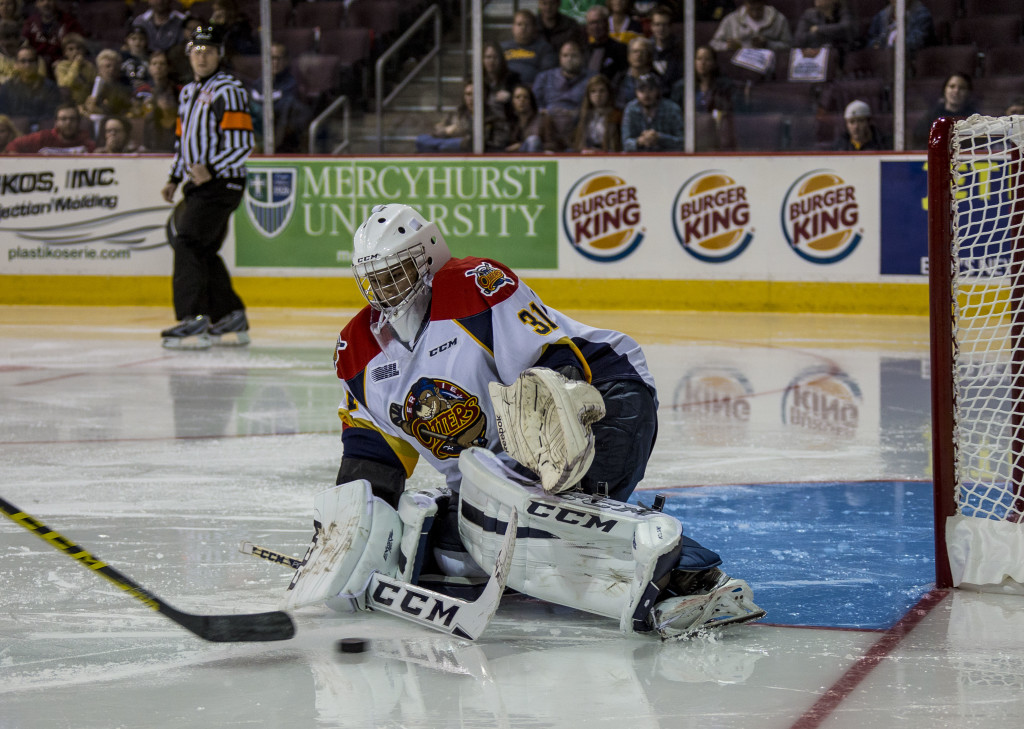 It was supposed to be a high-scoring  game between two of the OHL’s most potent offensives. Instead, the Erie Otters defeated the London Knights 3-1 in a well-played, defensive hockey game featuring two solid nights from the goaltenders.

Play early on in this game dictated a high-speed, physical, and entertaining match. After a big hit by Nick Betz on Ryan Valentini, Chandler Yakimowicz instigated and dropped the gloves with Betz. Yakimowicz received a minor penalty for instigating, a major for fighting, and a ten-minute misconduct while Betz received five minutes for fighting. The game’s first goal would go to London’s Christain Dvorak. After Devin Williams made the initial leg pad save, Dvorak chipped in the puck to make it 1-0 Knights at 17:06 in the first period.

Midway through the second period was when the Otters were able to strike back. Erik Cernak tallied his second goal in two nights and third of the season at 7:56 to tie the score up at one apiece. Betz and Vanya Lodnia picked up assists on the score.

Play would enter the third period still tied at one. Both teams had excellent goaltending, with Tyler Parsons doing his part for the Knights and Williams continuing to come up with big saves in key moments. Entering the game, London sported the best power play in the OHL with the Otters right behind them in second place. It turned out that the game-winning goal was scored on the power play in favor of Erie. Mitch Marner took a hooking penalty at 10:07 which gave Erie a prime opportunity they needed. Travis Dermott fired a shot from the point which was deflected in by Taylor Raddysh and put the Otters up 2-1. Dermott’s goal was his thrid goal in two nights and his second game-winning goal in a row.

From then on out, Erie continued to pressure and possess the puck in the offensive zone which in turn kept  the dangerous London attack away from Devin Williams on the other end of the rink. The Otters out shot the Knights 19-4 in the final frame on their way to victory. Alex DeBrincat put the exclamation point on the evening for Erie with an empty net goal, making the final score at 3-1.

The Otters will wrap up their three-in-three weekend in Kitchener tomorrow when they battle the Rangers beginning at 6 p.m.