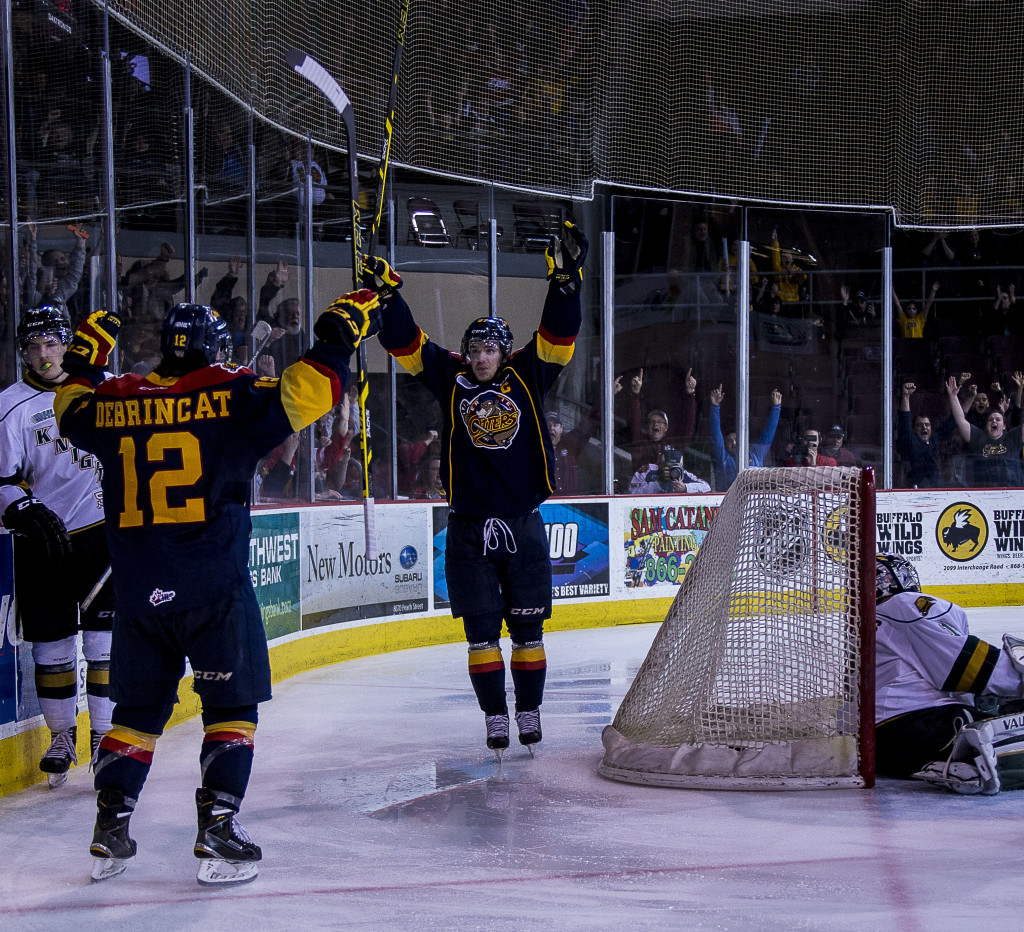 Erie, Pennsylvania – The Otters scored five unanswered goals to top the London Knights 5-2 in game one of the Western Conference semi-finals Thursday night. Erie outshot London 46-18 and Connor McDavid finished with four points on the night.

The Knights took an early lead shorthanded. A bounce sent the puck into the neutral zone where Mitchell Marner was able to pick it up and skate in on a breakaway, making it 1-0 five minutes into the period. Tyler Parsons stood on his head, keeping shot after shot from the Otters out of the net. Penalties went back and forth, but neither team was able to capitalize by the end of a period that had the home team out-shooting the Knights 21-3.

Max Domi started the Knights off 28 seconds into the period by giving his team a 2-0 lead. It looked as though London had made it 3-0, but after a review of the play, the officials decided the puck had been batted in with a hand and called back.

The Knights were called for delay of game and, after a flurry of activity in front of Parsons, McDavid lured him to the left side of his net, passed the puck to Dylan Strome, and Strome fired the puck into the open cage to put the Otters on the board. The Otters continued to have chances with Parsons denying Kyle Maksimovich, Travis Dermott and Nick Baptiste.

A hit in open ice in the Otters zone on Domi sent Kurtis MacDermid to the locker room with a five-minute major and game misconduct for checking to the head. Undeterred, Baptiste carried the puck in on a huge breakaway and tied the game at two shorthanded. McDavid had a chance of his own on the penalty kill, but Parsons turned it away. Baptiste nearly had another, but Betz and McDavid came streaking into the zone, Betz passed to McDavid, and the captain gave the Otters the lead with their second shorthanded goal of the major to end the period.

The Otters continued to pressure Parsons to start the third with Mason Marchment nearly scoring on a wraparound early on, and another shot going just wide. Josh Sterk hit the post and Devin Williams made the first of many big third period saves. At the other end of the ice, McDavid and Alex DeBrincat skated in on a two-on-one. McDavid passed to DeBrincat right in front of Parsons and DeBrincat was able to capitalize, making it 4-2 in favor of the Otters.

Williams and Parsons continued to stop chances from both sides. London used their timeout with just over three minutes to go and, not long after, called Parsons to the bench for an extra attacker. Remi Elie found McDavid in the London zone and McDavid flipped the puck into the empty net for the 5-2 final.

In addition to McDavid’s four points, Elie, Jake Marchment, and Baptiste all picked up two points in the win. Williams made 16 saves.

The Knights return to Erie Friday night for game two before the teams travel to London for game three on Sunday.