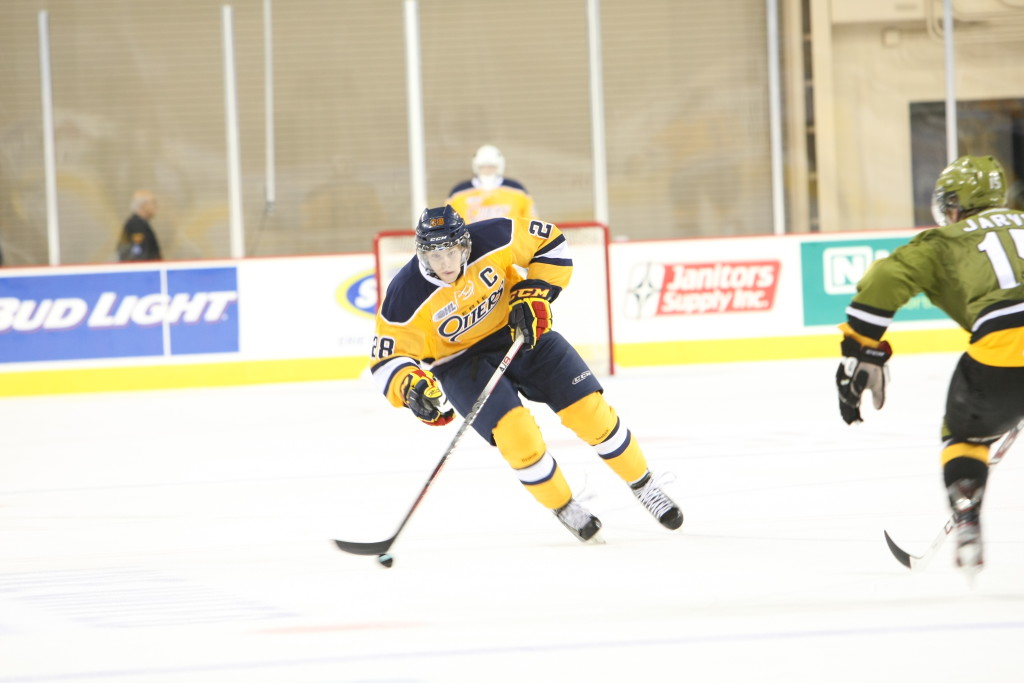 Erie, PA – The Erie Otters powered back from a two goal deficit by scoring six straight goals of their own to down the Kingston Frontenacs 6-3 at the Erie Insurance Arena Friday night.

Connor Brown’s hat trick would help lead the way for the Otters, as the captain recorded a four point night adding a late assist. Dansk won his twentieth game of the season stopping 26 shots.

Kingston took the first lead of the game when Samuel Schutt was able to trickle one by Dansk on the power play at 13:35 of the first. The lead quickly jumped to two when Robert Polesello notched his eighth of the season one minute and forty seconds later. Connor Brown then took over the game, banging home two power play goals in under two minutes of each other to tie the game at two entering the intermission.

Dane Fox experienced a scary moment midway through the first period when a skate cut him in the face. Fox put a hit on Kingston forward Mack Lemmon, knocking Lemmon down to the ice. In the fall Lemmon’s skate came up and caught Fox across the face. Fox left the game immediately with trainer Scott McLay. Fox would miss the remainder of the period, but would return for the second period and remainder of the game after receiving stitches.

Erie was given the chance to take their first lead of the game on the power play in the second period. Connor McDavid would find Brown to complete the hat trick and give the Otters a 3-2 lead. Quentin Maksimovich notched his second of the season at 9:08 of the second to give the Otters a 4-2 lead.

The Otters would pad their lead in the third period with another pair of goals early on in the final frame. Brendan Gaunce scored his 21st of the season, while Michael Curtis tallied his 18th on the year. Mikko Vainonen ended the Otters run with a power play goal on a five-on-three advantage late in the third. It was too little, too late for the Frontenacs as the Otters went on to the 6-3 victory.

The Otters are undefeated against the Eastern Conference this season, winning all 18 matchups with teams from the other conference. Connor McDavid picked up four primary assists on the night, while Adam Pelech recorded a three assist night. Gaunce recorded his second straight multi-point night with a goal and an assist. The Otters will receive a visit from the Guelph Storm Saturday night for the final matchup of the season between the two divisional foes.