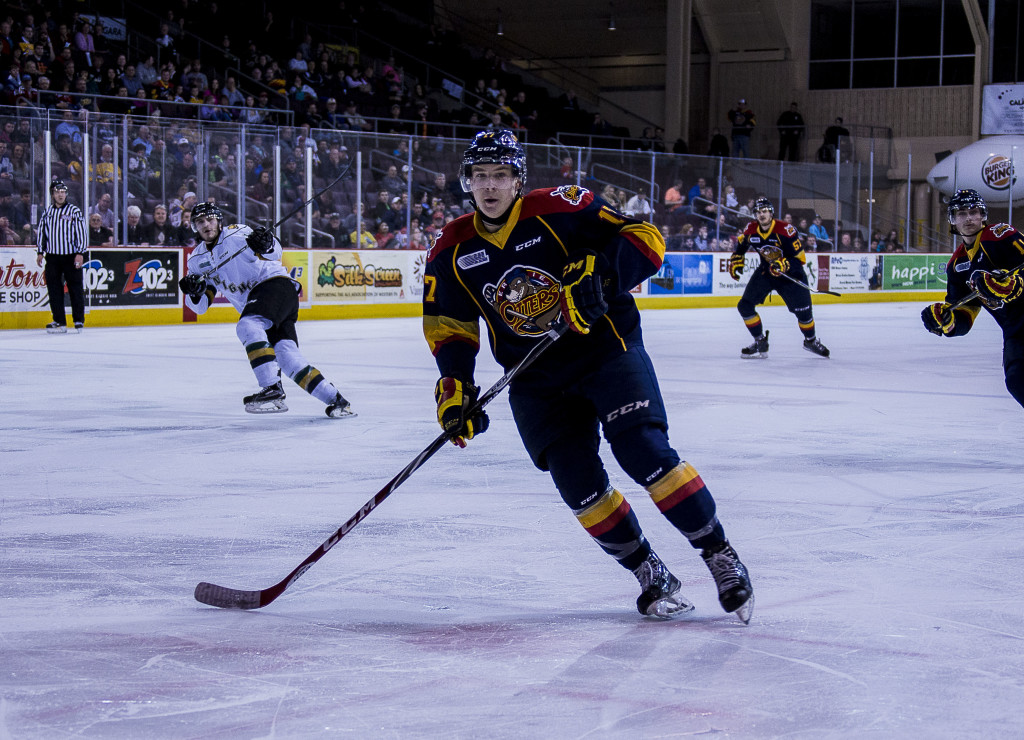 London, Ontario – A goal from Taylor Raddysh late in the third period gave the Otters the lead before Travis Dermott and Connor McDavid added an empty net goal each for a 5-2 victory over the London Knights Tuesday night, sweeping the series 4-0. Goaltender Devin Williams made 35 saves against London.

Special teams and goaltending made up the first period of game four. The teams traded penalties with both penalty kill units coming up big, keeping the opposing team off the board. Michael Giugovaz and Williams stopped the puck at both ends of the ice. Williams made two big saves in a row during the last ten seconds with London on a four-on-three power play after McDavid, Max Domi, and Alex DeBrincat were all sent to the penalty box.

Floodgates opened in the second period. As the penalty to DeBrincat expired to end the London power play, Julius Bergman snatched up a rebound and put a slap shot behind Williams only feet from the net. Domi looked like he would give the Knights a 2-0 lead, but Williams made the save before the Otters skated the other way. McDavid put a shot on net but, as Giugovaz closed the door with a poke check, the puck went to Dylan Strome who was able to elevate the puck into the open net above Giugovaz.

Domi carried the puck into the Otters zone not even a minute later to put the Knights back in the lead.   The Otters were able to come up with another set of good chances, but with 2:20 to go, Kyle Maksimovich picked up a rebound, took the shot, skated in next to the post and poked his own rebound between the post and Giugovaz’s pad to tie the game.

Owen MacDonald took a shot at Strome as Maksimovich scored, causing a pileup in the corner that ended with the Otters on the power play. Domi had another big chance shorthanded, but Nick Baptiste and Williams were able to break up the play, keeping the score tied at two to close the second.

During a scrum at the horn, DeBrincat was called for slashing, putting the Otters on the penalty kill to begin the third. Travis Dermott sat for interference 33 seconds later, leaving Erie with 1:27 of five-on-three to kill. Williams continued to rob the Knights of chances before the Otters killed both minors. The teams went back and forth from there with big saves and near chances at both ends.

With just under four minutes to play, Troy Donnay took a shot from the point that was redirected by Raddysh into the net, beating Giugovaz for the first Otters lead of the night. The goal was reviewed, but ultimately stood. Williams stopped Domi twice before the Knights used their time out. Giugovaz was called to the bench and the Knights began to swarm around the Otters zone. Dermott’s clearing attempt turned into an insurance goal for the Otters as he put the puck into the empty net from deep in the Erie end with 2:02 remaining. The Knights kept the extra attacker out and, with eight seconds to go, McDavid skated in and flipped the puck into the empty cage for the 5-2 final.

Erie outshot London 46-37, only being outshot in the third period. The Otters and Knights are now 3-3 in a series in team history. The Otters also become the first team to sweep the London Knights since the Peterborough Petes did it in 2006. The sweep is the second in Otters history, with the first coming over Sault Ste. Marie in last year’s semi-final. McDavid’s goal and assist on the night puts him at 14 points in the series for the new Otters record.

The Otters will face off against the Sault Ste. Marie Greyhounds in the Western Conference Final after the Greyhounds sweep of the Guelph Storm concluded Tuesday night.