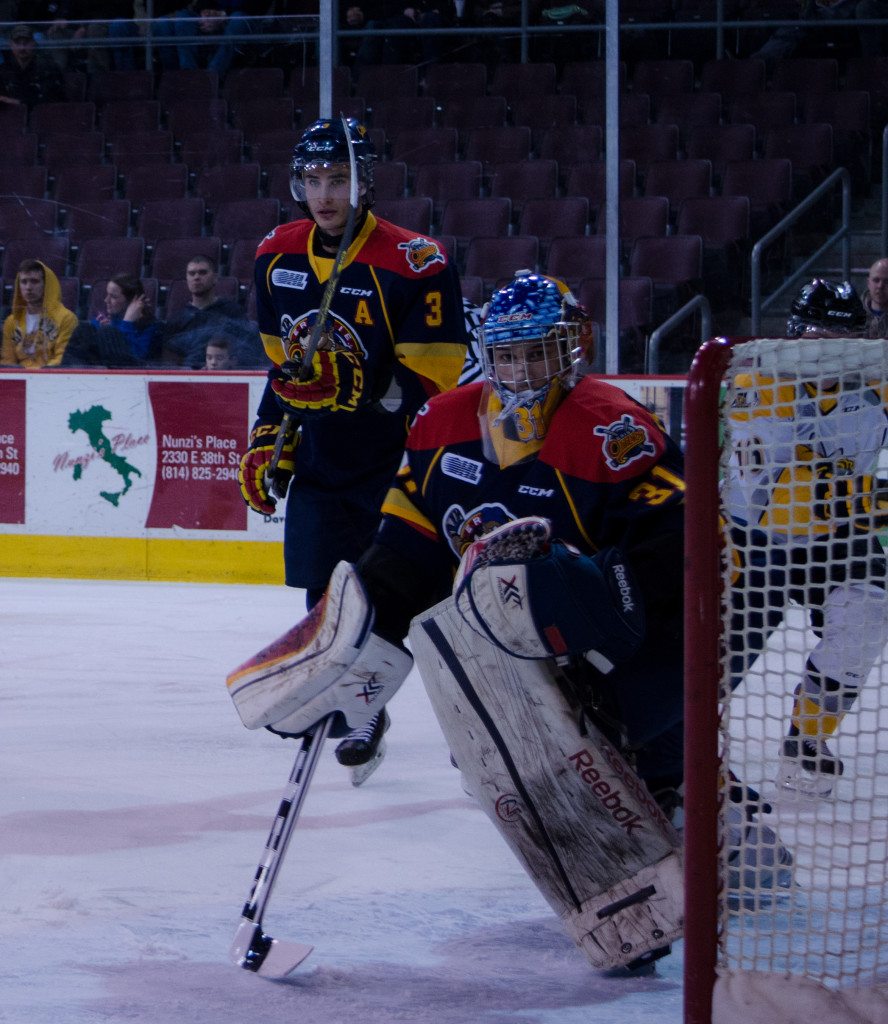 Erie, Pennsylvania – The Otters clinched their spot in the Western Conference semi-finals Friday night with a 7-0 shutout win over the Sarnia Sting in game five. Devin Williams made 26 saves in front of 6,103 fans.

Taylor Dupuis picked up where he left off, stopping Connor McDavid early. With Patrick Fellows in the box for hooking, the Otters went to work on the penalty kill, preventing the Sting from getting any shots to the net while controlling play in the Sarnia zone. WIlliams stayed in control at the other end of the ice, turning away a few chances on a flurry of shots.

McDavid went just high and wide before the Otters went to the power play. It took Travis Dermott six seconds to put a shot on net from the slot, Dylan Strome deflecting it for the opening tally. The Otters went back on the power play to close out the period, with 44 seconds carrying into the second.

Nick Baptiste needed 27 seconds to put a rocket behind Dupuis from the circle, giving the Otters a 2-0 lead. Quentin Maksimovich and Shaun Bily skated in on Dupuis, who skated out to meet them at the hashmarks, narrowly beating them to the puck to keep the Otters up by two. Not long after, Baptiste picked up his second of the night from the top of the circle off the face off, putting the Otters up 3-0.

The Sting killed a penalty to Pavel Zacha, but it didn’t stop the Otters. After killing a penalty to McDavid – on which Fellows had a chance shorthanded – Jake Marchment skated alone to the right of Dupuis from a pileup along the boards and gave the Otters a four-goal lead. McDavid narrowly missed for a fifth before DeBrincat was called for a check from behind with 37.2 seconds left in the second.

Kurtis MacDermid was called for slashing 25 seconds into the third, putting the Sting on a five-on-three.  The Otters killed the penalties and Dermott went from assists to a goal of his own, making it 5-0. DeBrincat had two chances, both of which were denied by Dupuis.

MacDermid was sent back to the box with an unsportsmanlike minor, but that didn’t stop the Otters offense. McDavid skated in all alone and blasted the puck behind Dupuis shorthanded. The Sting went back on the power play, but Williams continued to stop the puck. The Otters killed the penalty before getting a power play of their own. With three seconds to go on the man advantage, Patrick Murphy found an opening and put the Otters up 7-0, sealing their 4-1 series victory.

The Otters tilted the shots 49-26 and went 3/5 on the power play. McDavid, Dermott and Strome all finished with three points on the night, with 13 Otters landing on the scoresheet.

The Otters will next face the winner of the series between the London Knights and the Kitchener Rangers.