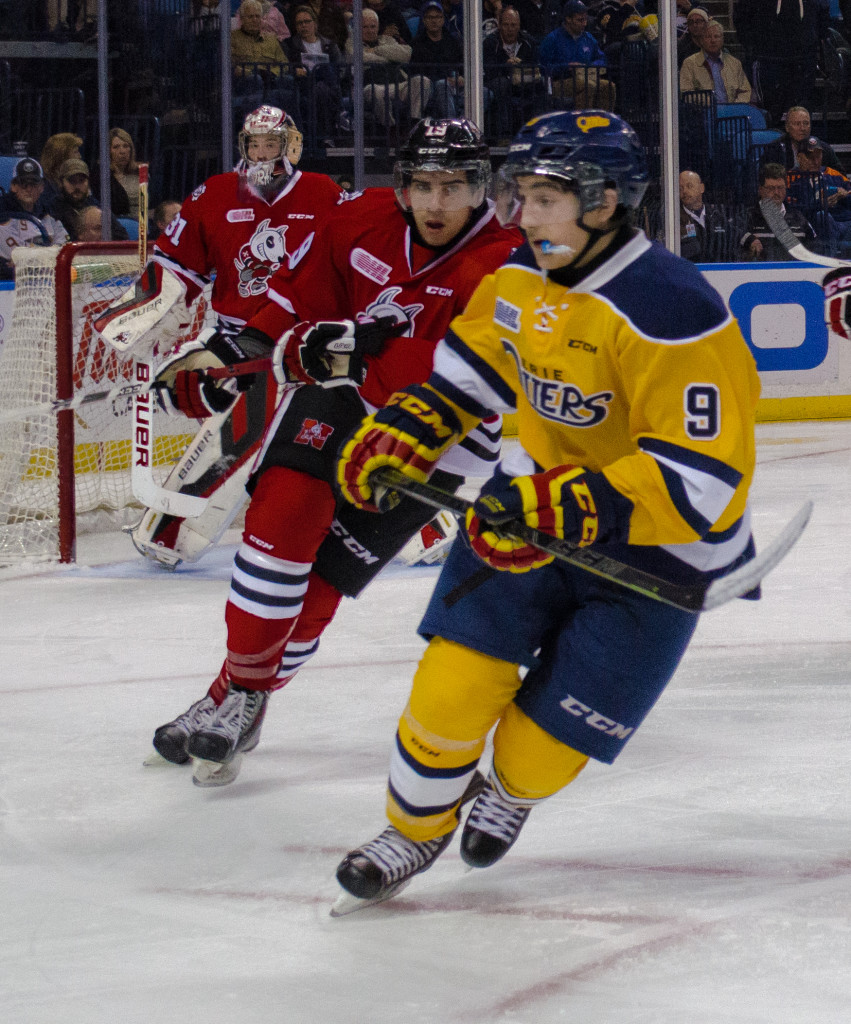 Sarnia, Ontario – The Otters came back from a 3-0 deficit with a goal in the second and two quick goals in the third to force overtime and defeat the Sting 4-3, taking a 3-1 lead in the series. Dylan Strome scored the overtime winner from Cory Genovese and Alex DeBrincat.

A familiar scene played out in Sarnia Tuesday night with the Sting taking a 2-0 lead early on in the first period. Hayden Hodgson gave Sarnia a 1-0 lead 42 seconds in, before Kevin Spinozzi added a second just over two minutes later. Jordan Kyrou made it 3-0 Sarnia nearly 13 minutes in, and the Otters called Devin Williams to the bench in favor of Daniel Dekoning. Dekoning made a couple of solid, early saves before the horn sounded on the first.

The Otters came out faster in the second with Mason Marchment getting a chance right away, but was denied by Taylor Dupuis. On the other end, Dekoning stood tall against Nikita Korostelev, keeping the Sting from pulling farther away. Strome had a chance on the power play and was stopped by Dupuis before hitting the post, but Kyle Maksimovich made a big hit along the boards, picked up the puck, and beat Dupuis to get the Otters on the board.

DeBrincat was the next to be stopped by Dupuis right in front, but at the other end of the ice, Hodgson hit Travis Dermott from behind and Troy Donnay made him answer, the two dropping the gloves. Hodgson was assessed a minor for checking from behind and a major for the fight, while Donnay received an instigator minor, a fighting major, and a 10-minute misconduct for instigating. Taylor Raddysh and DeBrincat put up a big effort in front of the net, but were turned away by Dupuis before Nick Baptiste went just high at the horn.

Where Sarnia started the first, Erie started the third. Dermott skated coast to coast and fired the puck past Dupuis 46 seconds in to bring the Otters within one. Twenty five seconds later, Raddysh skated in, crashed the net, and put the puck home behind Dupuis from right in front to tie the game. The Otters continued to push through the period, with near misses from several Otters and Dupuis stealing others.

The third period wound down with a flurry of activity in front of Dupuis, with the Sarnia netminder freezing the puck. Masimovich hit the post and, just after, the Otters went to the power play with 1:19 to go. While the Otters came close, they weren’t able to beat Dupuis, forcing overtime for the first time in the series.

The Otters started overtime on the power play but, despite big chances, the Sting were able to kill the penalty. Dekoning and Dupuis went back and forth with huge saves, including Dupuis robbing Strome on a breakaway and Dekoning stopping a flurry of shots from the Sting. Dupuis denied Connor McDavid, but couldn’t stop Strome, who put the puck behind the Sting netminder halfway through the overtime period for the 4-3 Otters victory.

Maksimovich, Dermott and Raddysh all scored their first goals of the playoffs while Strome’s was his third tally. The Otters outshot the Sting 44-22, with Dekoning making 16 of 16 saves.

The series goes back to Erie Friday night for game five at 7 p.m.