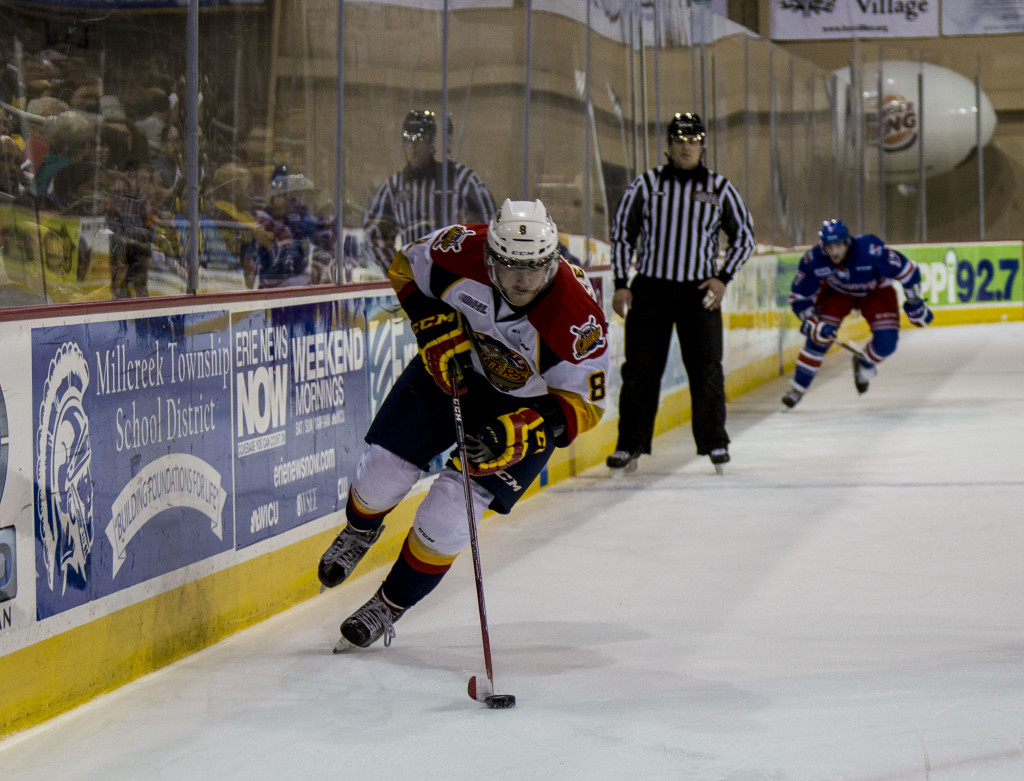 In a battle between two of the OHL’s elite, the Erie Otters defeated the Kitchener Rangers 3-2 at Erie Insurance Arena to earn their 20th win of the season. This was the second meeting between the Otters and Rangers this season when both were ranked first and second respectively in the CHL rankings. The opening period saw both teams playing stout defensive hockey. It wasn’t until there were just seconds remaining in the period when the game’s first goal was scored. Kitchener got on the board first when Ranger’s leading scorer Ryan MacInnis scored his 18th of the year at 19:28. The score remained 1-0 entering the first intermission. The second period was the Otters turn to get on the offensive. First, Kyle Maksimovich buried his eighth on a rebound try to knot the game up at one apiece with 11:44 on the clock. Then, at 15:44, Jakob Mayenschein tipped in Erik Cernak’s shot from the point to give Erie the 2-1 lead. The score was Mayenschein’s second of the campaign. The Otters held their one-goal advantage entering the final period of regulation.In the third period, Devin Williams stood tall between the pipes and the Otters made it difficult for Kitchener to mount any sort of comeback. The Rangers pulled Luke Opilka with over two minutes remaining, but the Otters made them pay. Alex DeBrincat netted his 29th in the empty net to extend the Erie lead 3-1. Kitchener’s Adam Mascherin scored with just over a minute remaining, but the Otters held on to win 3-2. The Otters will go on the road tomorrow, Friday the 22nd, to face the Mississauga Steelheads before returning home for a tilt against the Sault Ste. Marie Greyhounds on Saturday the 28th. The Iron Workers Local Union No. 3 Iron-men of the game:1) Alex DeBrincat- 1 G, 1 A2) Luke Opilka- 36 saves3) Kyle Maksimovich – 1 G