Otters Stay Perfect in the Shootout 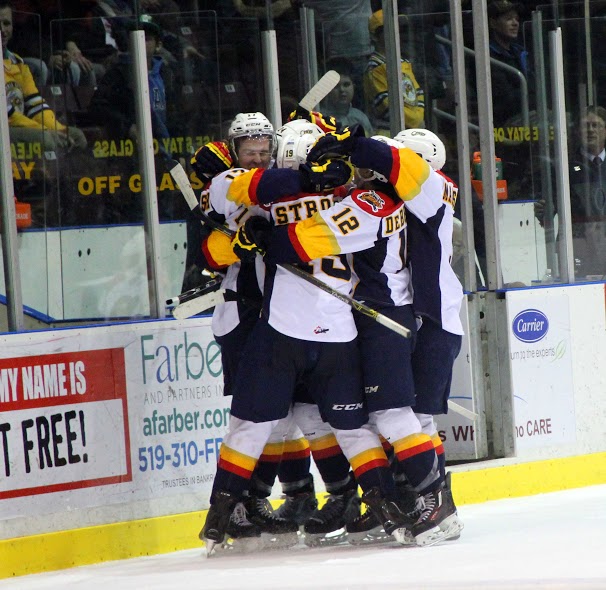 Devin Williams was excellent in net recording 39 saves and was crucial in the Erie Otters 3-2 win against the Sarnia Sting. The Raddysh brothers also played a key role in the victory. Darren Raddysh had the game-tying goal in the second period and Taylor Raddysh scored the game winner in the fifth round of the shootout.

Sarnia broke the deadlock just over two minutes into the first period when Troy Lajeunesse scored on a quick feed from Devon Paliani. The Otters were plagued by penalties in the first but stood strong killing off all four Sting power plays. Erie even found the back of the net while being a man down. Jake Marchment snuck a puck past Charlie Graham to score his fourth goal in four straight games to knot the game at one.

The Otters presented the Sting with a power play with five minutes left in the middle period and paid for it. Travis Konecny set up Jakob Chychrun with a cross-ice pass that Chychrun buried in the back of the Otters net to go up one. With under a minute left Darren Raddysh scored his fifth goal of the season to level the contest at two heading into the final period.

Neither team could convert on power play opportunities in the third period so the game headed to extra time.

Williams made some miraculous saves in the overtime to force a shootout. Williams and Graham were both perfect through the first four rounds of shooters. Following a clutch save by Williams against Sarnia captain Sam Studnicka, Taylor Raddysh came flying down the ice and made a quick move, then quickly went top shelf to win the game for the Otters.

Erie is back in action tomorrow at 7:05 for a tilt in Windsor against the Spitfire.