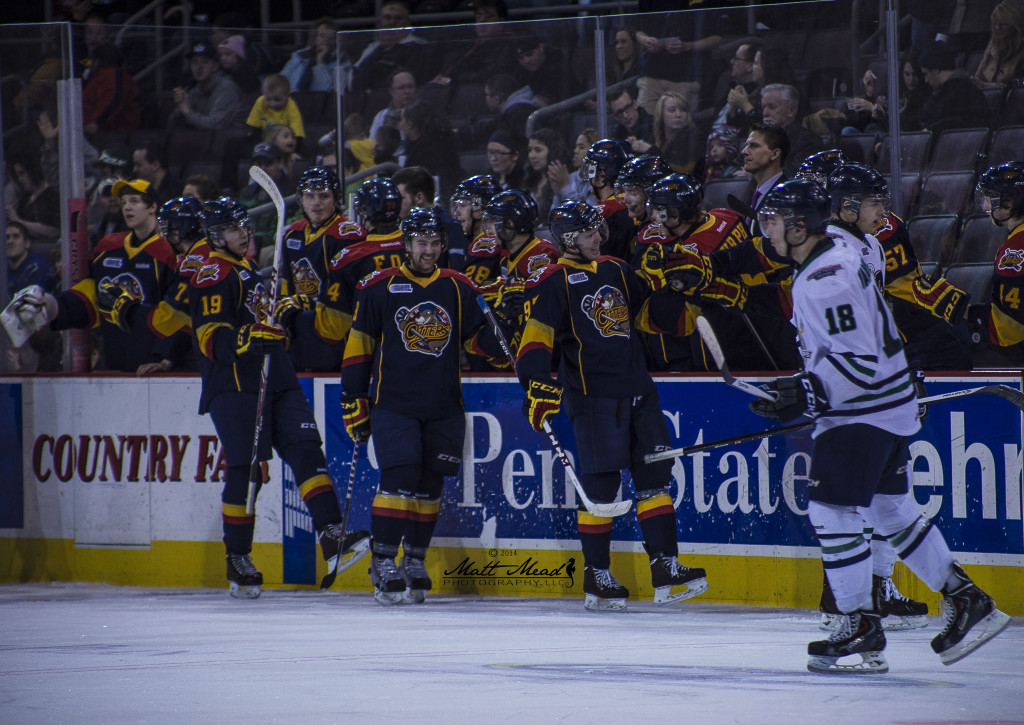 Plymouth, Michigan – The Erie Otters handled the Plymouth Whalers Friday night 10-1 at the Compuware Arena to hold onto the third spot in the Western Conference while setting the franchise record for points in a season with 104.

The Otters picked up where they left off against the Whalers last Wednesday jumping out to a 1-0 lead when Andre Burakovsky ripped a shot over Plymouth starting goaltender Zack Bowman. The Whalers would tie the game when Zach Lorentz banged home a rebound past Devin Williams midway through the period. The Whalers were swarming after that until Michael Curtis deflected a Troy Donnay point shot up over the glove of Bowman, sending the Otters into the intermission with a 2-1 lead.

The flood gates opened up from there as the Otters took over the game with a five goal second period. Brendan Gaunce put the Otters up by two goals just two minutes 50 seconds into the period. Erie’s special teams stepped up midway through the period. Connor McDavid scored his first of the night shorthanded midway through the second. McDavid would score again two minutes and 20 seconds later on a five-on-three power play. During the second penalty Spencer Abraham would finish off an Andre Burakovsky pass from in tight. Brendan Gaunce finished off his second of the night from Travis Wood sending the Otters into the intermission with a 7-1 lead.

Erie would finish off Plymouth, padding the stats with goals from Dane Fox, Michael Curtis and Jake Evans for a 10-1 decision. Williams picked up his 22nd win of the season. The line of Michael Curtis, Dylan Strome and Andre Burakovsky combined for three goals and eight points. Brendan Gaunce tallied two goals and a three point night.

The Erie Otters travel back to the Erie Insurance Arena for their final game of the regular season against the Sarnia Sting.