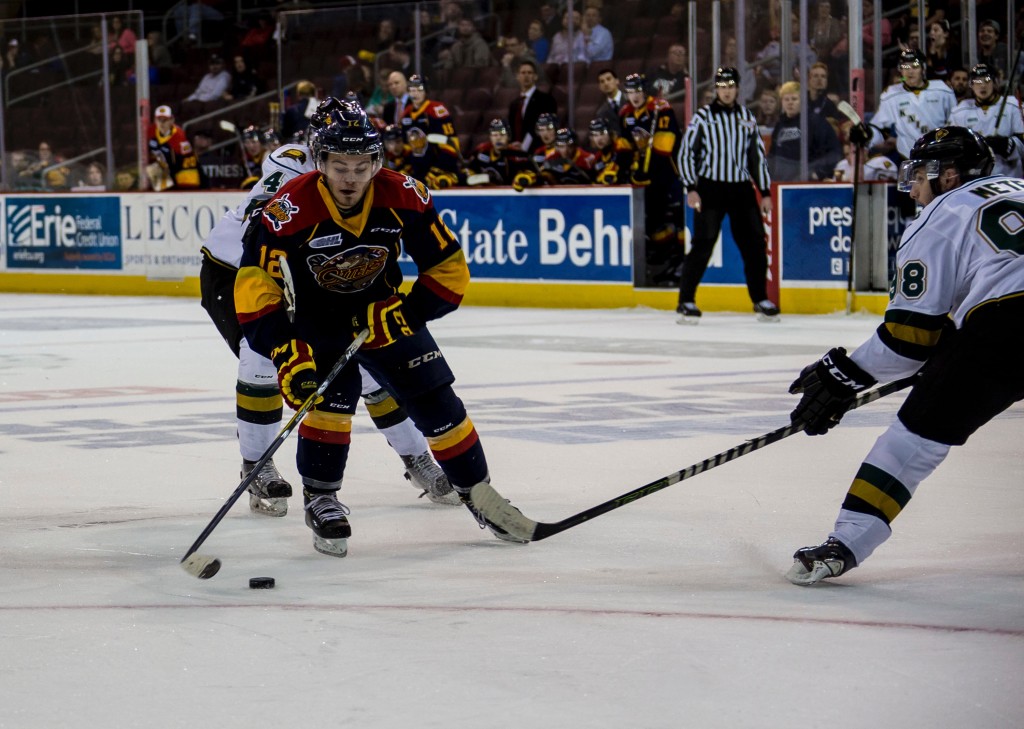 The London Knights first line overwhelmed the Erie Otters as they combined for six for the seven Knights goals in their 7-4 road win. Alex DeBrincat was the glimmer of hope for the Otters as he scored his second career playoff hat trick.

The Otters struck first when Kyle Maksimovich snapped a wrist shot by Tyler Parsons to jump to an early 1-0 lead. The Knights dominated the rest of the period with four unanswered goals. Christian Dvorak scored his seventh of the playoffs on the power play to level the game. Following another Erie penalty Matthew Thachuk scored after some tic-tac-toe passing from Mitchell Marner and Dvorak. The Knights took a two-goal advantage when Marner scored a third power play goal for London. The visitors took at 4-1 lead when Dvorak potted his second of the game off of a feed from Tkachuk.

London wasted no time to expanding the lead in the second period when Tkachuk hooked up with Dvorak and Marner to make it 5-1. The Otters shrunk the deficit to three goals when DeBrincat buried a puck into the Knights net after receiving a pass from Erik Cernak. With under two minutes remaining in the second frame DeBrincat scored his second of the game with the assists being awarded too Dylan Strome and Taylor Raddysh.

Nearly eight minutes into the final period defensemen Olli Juolevi made it a 6-3 contest with a goal off of a wrist shot. Minutes later DeBrincat scored a goal to secure his hat trick and to make the score 6-4. With under a minute left Tkachuk tallied the empty net goal to lock up and hat trick for himself and a Knights victory.

The Otters have time to recover from the game one defeat with game two being set for Sunday at 7:00 p.m.