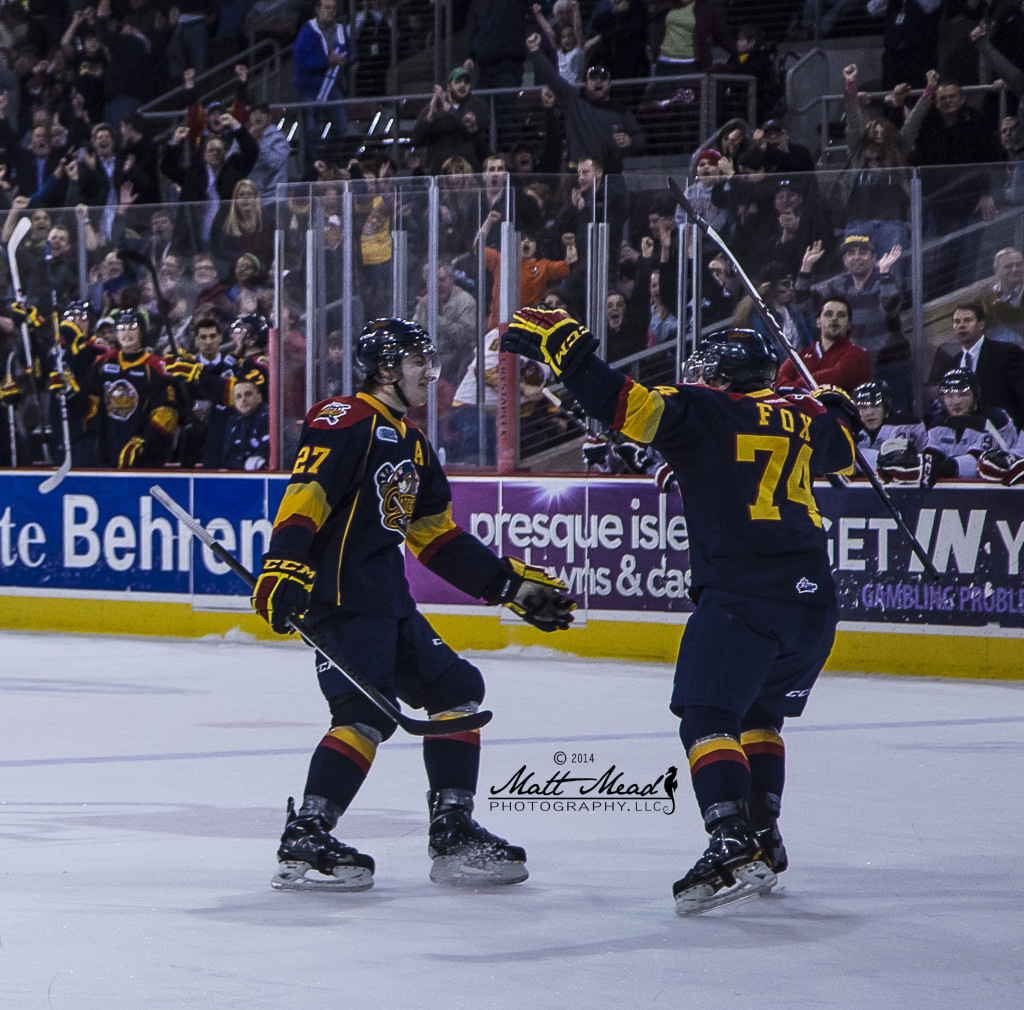 Erie, Pennsylvania – The Erie Otters Hockey Club opened their Western Conference Quarterfinals matchup with the Saginaw Spirit Friday night, in a game that saw the Otters rally back from two deficits to take game one 4-3.

Erie, playing in the playoffs for the first time since 2011, entered the game with many on their roster seeing their first OHL playoff action of their careers. Saginaw looked to take advantage of the lack of playoff experience as they opened the scoring just 66 seconds into the game. A faceoff win after an icing call found the puck on the tape of Eric Locke, who then rifled the puck past Devin Williams. Former Otter Luke Cairns picked up from there extending the Saginaw lead to two at 6:18 of the first.

The Otters would find their opportunity to get on the board when Justin Sefton and Dylan Sadowy took penalties eight seconds apart. With the two-man advantage, the Otters power play went to work. A pass in front of the goal was poked by Spirit net minder Jake Paterson loose in the crease where Connor Brown found the loose puck and threw it into the back of the net. Saginaw took a 2-1 lead into the first intermission.

The regular season’s top rated power play found its way onto the ice again in the second period. Erie, with the second unit out, worked the puck around the perimeter where Travis Dermott set up Andre Burakovsky. The Swedish winger’s shot bounced off defenseman Sefton, redirecting the puck past Paterson to tie the game at two. A four-on-four situation opened enough room for the Spirit to reclaim the lead. Kristoff Kontos redirected a Jacob Ringuette point shot through the legs of Williams. Saginaw led 3-2 after two period.

The regular season’s third best scoring offence was not finished yet as Andre Burakovsky sniped his second of the night from the left wing circle, to tie the game at three. The game seemed to come down to who would make the next mistake, and unfortunately for Saginaw they put the hot Erie power play back on the ice late in regulation.

The regular season’s leading goal scorer was not to be denied when the game was on the line. Dane Fox carried the puck to the left wing circle where his first slap shot was blocked by a diving Sadowy. Fox gathered the puck back in and unleashed another blast through traffic that beat Paterson to the glove side giving Erie their first lead of the game. The Otters would hold on in the final minutes to take game one 4-3.

Devin Williams picked up the win in his first playoff start, stopping 25 of 28 shots. Brendan Gaunce and Travis Dermott both had two assist nights. The Erie Otters will take a 1-0 series lead into Saturday night’s game two.