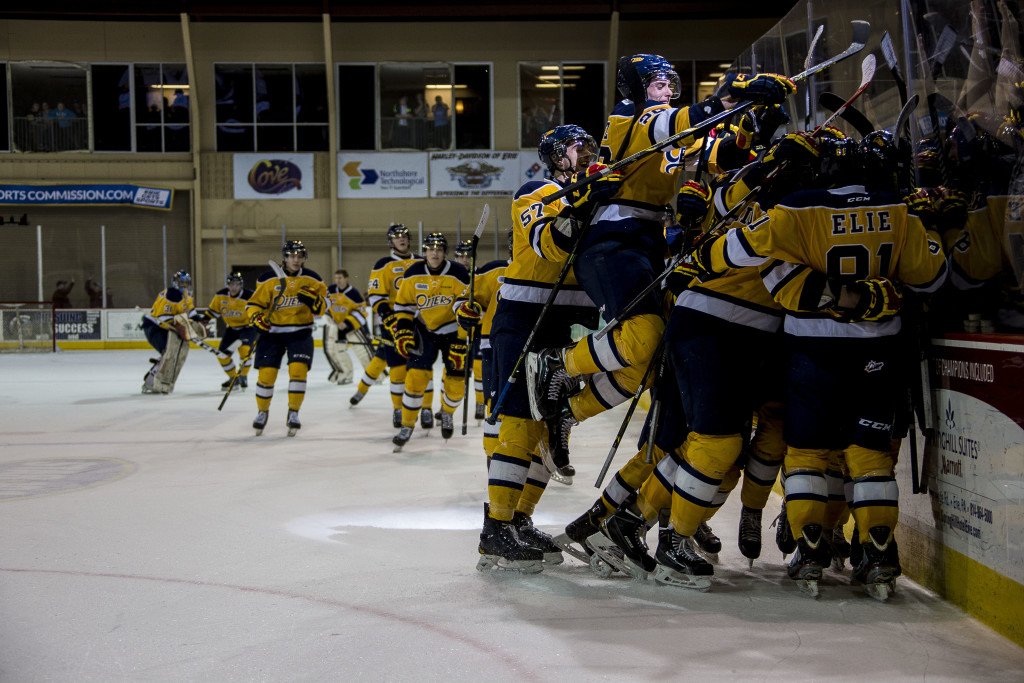 Sarnia, Ontario – The Otters took a 2-1 lead in the series with a 6-5 win in Sarnia Sunday night. Jake Marchment scored a hat trick and Dylan Strome added two goals of his own in the win.

Sarnia opened the scoring for the first time in the series after Stephen Pierog picked up the puck as he left the bench and skated in, giving the Sting a 1-0 lead three and a half minutes in. Strome and Taylor Raddysh were both stopped by Taylor Dupuis on an early power play and, with a slap shot halfway through the period, Pavel Zacha put Sarnia up by two. Devin Williams made a huge save on Nikita Korostelev before Dupuis stopped Nick Baptiste at the other end. But a shot by Patrick Murphy from the point was deflected by Strome to cut the lead in half before the end of the period.

The flood gates opened for the Otters to start the second. The Sting killed an early penalty, but Marchment tied the game at two just over two minutes in. A minute and twenty seconds later, Strome gave the Otters the lead on a power play goal before, 13 seconds later, Marchment scored his second to put Erie up 4-2.

With the Otters on the penalty kill, Marchment skated into the offensive zone and finished off the first hat trick of the playoffs, giving the Otters a 5-2 lead. Alexandre Renaud cut the lead back to two goals, putting Sarnia back on the board after the Otters scored five unanswered.

The third period picked up right where the second left off. It took Sarnia two and a half minutes to bring the score within one on a goal from Hayden Hodgson, and, not even a minute later, Troy Lajeunesse tied the game at five. Dupuis stopped Alex DeBrincat, but couldn’t stop Connor McDavid. Nearly halfway through the period, the Otters captain found the back of the net, giving the Otters the lead.

On the power play, DeBrincat and Baptiste both had near chances, with DeBrincat shooting just wide and Baptiste stopped by Dupuis. A crucial penalty kill for the Otters came with 3:56 to go in the period after DeBrincat was called for goalie interference. The Sting continued to press, but Erie killed the penalty and, with just under two minutes to go, Sarnia called Dupuis to the bench. Sarnia used their time out, but the Otters held out for the 6-5 win.

Marchment’s hat trick becomes the fastest in Otters playoff history, clocking in at three minutes and twenty three seconds – the first goal coming 2:25 into the period and his third at 5:48. Dane Fox had the last playoff hat trick for the Otters on March 26, 2014 against the Saginaw Spirit. Defensemen Murphy and Kurtis MacDermid both notched two assists on the night and McDavid finished with a goal and an assist.

The Otters face off in game four with Sarnia Tuesday night on the road before travelling back to Erie for game five Friday at 7 p.m.