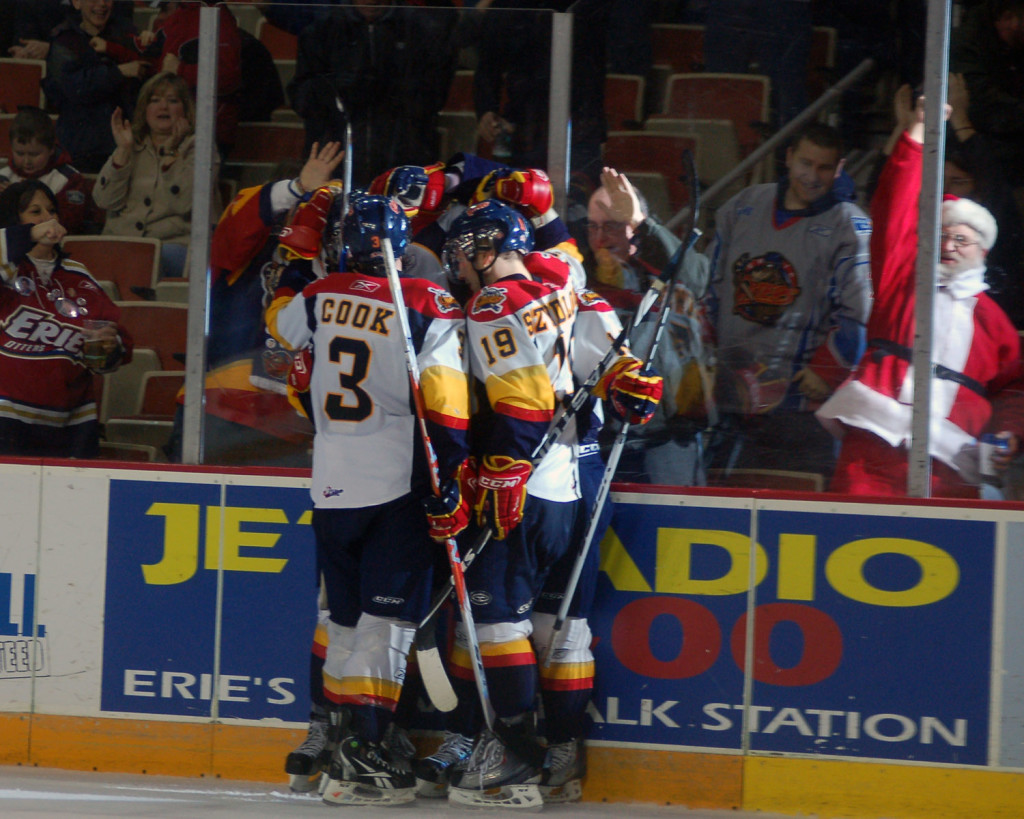 Erie, Pa. – The Erie Otters split a pair of games at home against Eastern Conference opponents last week. After the Plymouth Whalers were held without a point on their three-game road trip, the Otters are now tied for fifth with Plymouth in the Western Conference heading into the holiday break.

– Ramis Sadikov has set a team record with 25 consecutive starts, breaking the old mark of 23 by Josh Disher, originally set in the 2002-03 season. The streak would end Sadikov be selected to Russia’s World Junior team this week.

– Friday’s loss against Brampton was the first regulation loss at home since Nov. 12 against Saginaw, snapping a five-game point streak (4-0-0-1) at home.

– The Otters won their fourth overtime game of the season Saturday night against Sudbury. The four overtime wins are the most since the OHL Championship season of 2001-02, when they won six games in overtime.

– Greg McKegg is still on a tremendous pace to become Erie’s first 100-point player after four points in two games last weekend. If McKegg maintains his current pace, he will finish the season with 105 points.

THE WEEK IN REVIEW

Game 34: Brampton attack late in the game to steal 2-1 decision from Otters

A deflection by Barclay Goodrow with 1:23 left in regulation denied the Erie Otters a point as the Brampton Battalion escaped Tullio Arena with a 2-1 win Friday night. After a scoreless first period, the Battalion scored just 23 seconds into the second period after Stephon Thorne fired a shot from the right circle to give Brampton the advantage. Exactly one minute later, the Otters tied the game after crashing the net. After continued blocked shots by the Battalion defense, Greg McKegg burst through with a shot between the legs of Matej Machovsky that was tipped into the net by Mac McDonnell for his fifth of the season at 1:23. The Battalion pressure eventually did the Otters in, as they capitalized on a defensive-zone turnover and created the game-winner. Sadikov made 33 saves in the loss, as the Otters were outshot by the Battalion, 35-27. Both teams were shut out on the man advantage, with the Otters unsuccessful on five attempts and the Battalion on two.

Greg McKegg gave the 3,987 fans at Tullio Arena an early Christmas present Saturday night as the captain redirected a shot by Adam Pelech for the winner in overtime to give the Erie Otters a 3-2 win over the Sudbury Wolves. The goal came 1:02 into the extra frame, as Pelech saved the puck at the left point and fired a shot that would have gone wide had it not been for the perfect deflection by McKegg, which eluded Wolves goaltender Alain Valiquette for his 25th goal of the season. The game had remained scoreless until the 12:35 mark of the second period, when the Wolves executed a perfect faceoff play as Ryan Hanes shot off the faceoff went off the stick of Michael Sgarbossa at the left circle through Ramis Sadikov’s legs to give the Wolves a brief lead.
Just over three minutes later, the Otters tied the game after a strong shift by the first line. A continuous cycle in the Wolves zone led to David Shields firing a wrist shot through traffic for his third goal of the season at 15:58. The Otters would capitalize on the power play in the third period to take the lead as Derek Holden fired a slap shot from the high slot at 4:27. Sgarbossa evened the score for Sudbury at 12:42, putting in his own rebound for his second goal of the game. The overtime would set up McKegg’s dramatic goal, which also capped a three-point night for the captain, as he also tallied two assists in the evening.

The Otters will go on league-mandated holiday break until December 28, when they will kick off the remainder of the OHL season against the Plymouth Whalers. The Otters defeated the Whalers, 4-1, on Oct. 27. That game marked the debut of Phil Varone. The game against Plymouth will be important, as both teams are tied with 36 points in the Western Conference. The Whalers own the edge at the moment since they have two games in hand on the Otters. The following day, the Otters will travel north to Saginaw to take on the Western-Conference leading Spirit, who have won two games late in regulation at Erie this season. The Spirit could be without top prospect Brandon Saad, who may represent the United States at the World Junior Championship. The Otters will complete the road trip on New Year’s Eve for an afternoon (2:00 p.m.) contest against the Windsor Spitfires. The World Junior Championship could weaken the Spitfire lineup, with Tom Kuhnhackl (Germany), Jack Campbell (United States), Ryan Ellis and Zack Kassian (Canada) all participating in the tournament.