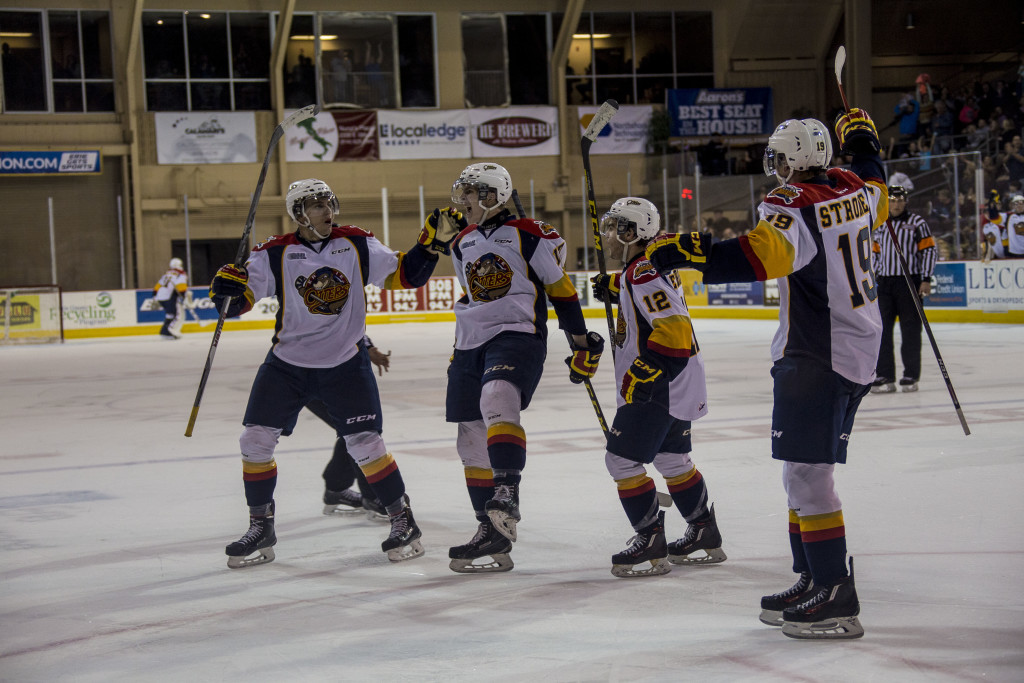 The Erie Otters began its three-in-three weekend stretch with a wild 6-4 come-from-behind victory against the Oshawa Generals at Erie Insurance Arena Friday evening.

The opening period was a showcase of structured, defensive hockey from both teams. Shots were limited early and both teams’ forechecks kept pressure on the puck, making it difficult to create any clean entries into the offensive zone. The ice finally opened up when Oshawa went to the power play after a Travis Dermott tripping penalty. The Generals would be penalized on the man-advantage, creating a four-on-four with a short Otters power play to follow. Dylan Strome capitalized on the short power play with his seventh goal of the season, giving Erie the 1-0 lead entering the break.

Oshawa got another crack at it on the power play early in the second period and they tied it up. Mitchell Vande Sompel recorded his first of the season on the man-advantage just 1:26 into the second period. A little over three minutes later, another player would score his first goal of the season, this time for Erie. TJ Fergus’ wrist shot put Erie back in front at 4:42. The Generals followed up the Fergus score with another game-tying goal, this time courtesy of Michael Dal Colle. His goal was his second point of the game and knotted the score back up at 2. Oshawa would get its third score of the game from Domenic Commisso at 13:29 to take the lead. Devin Williams relieved Jake Lawr in net after the score.

Following the Commisso goal, the Otters got their chance to tie the score back up as Alexandre Renaud received a five-minute major and a game-misconduct for a hit from behind on Mitchell Byrne. On the ensuing power play, Taylor Raddysh netted his seventh of the season to even the score once again. The score remained 3-3 at the conclusion of 40 minutes.

To begin the third, the Generals found a way to take the lead once again. The first-career OHL goal for Kyle MacLean at 4:57 put Oshawa up 4-3. From then on out, the Otters countered with three unanswered goals. The first was Erik Cernak’s, a seeing-eye wrist shot to tie the game at four apiece with just over six minutes remaining. Then Taylor Raddysh netted his second of the evening and eighth of the season at 16:44, giving Erie the go-ahead goal. After pulling Jeremy Brodeur for an extra attacker, the net was wide open for a Kyle Pettit empty-netter to seal a 6-4 victory for the Otters.

Travis Dermott finished with four assists for Erie. Williams stopped nine of ten shots after entering the game in the second period.

The Otters will get right back on the ice tomorrow in Erie when they host the London Knights at 7:00. They will complete their third game in as many days Sunday when they travel to Kitchener to face the Rangers. That game is scheduled for a 6:00 start.